Ramoji holds the Guinness World Record for being the largest film studio complex in the world. Spread over 1,666 acres, the complex is both a shooting location as well as a tourist.

Much like the two minutes of blank screen and darkness of a cinema hall you experience before the main film rolls out, the serene drive to the Ramoji Film City, meandering through small hillocks set amidst verdant lands, gives you a breather before you experience what lies ahead. Once you’ve entered the film city, you’re spoilt for choices – there are replicas of an airport, a railway station, a jail, monuments, international streets, small towns, numerous gardens, the Wild West (with a cowboy theme), several interactive shows based on cinema and its making, a butterfly garden, a bird park, an adventure park, intricately sculpted statues, fountains and if you’re lucky enough, a glimpse of your favourite actor shooting for a new film. You don’t need 80 days to go around the world anymore, when in Ramoji Film City, you can do it in the span of eight hours.

This 1,666 acres of cinematic magic, which plays with your spacio-temporal understanding, was founded by film producer Ramoji Rao in the year 1996. It has been featured in the Guinness Book of World Records for being the largest film city in the world. Umpteen Telugu, Hindi, Malayalam, Tamil, Kannada, Oriya, Marathi and Bengali films were shot here. It is then inevitable that you find yourself associating the dummy sets and gardens here with the movies you earlier saw them in. The film city’s premises also house the Ramoji Academy of Film and Television, several indoor studios and the ETV (Eenadu Television) office. 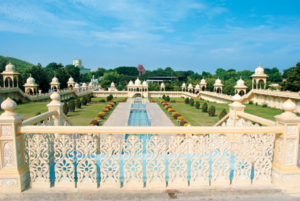 The main gate of Ramoji Film City, which lies on the Vijayawada Highway, is the point till which private vehicles are allowed into the complex. Beyond here, the film city has special buses, which drive you through another gate that opens onto a small hillock surrounded by sprawling green meadows. The 6-km-long beautiful drive culminates at the third and final gate of the film city. The road first passes through the two hotels, Tara and Sitara, which lie ahead of an intersection where there is the Sun Fountain. The road that goes straight from here can be deemed as the main road of the film city. This road is open for tourists. The left turn here leads to the administrative block.

As you drive on the main road, you’ll encounter the majestic Mughal Gardens on your left. Straight ahead, there is Eureka, the main pavilion of the film city, which receives tourists. Eureka has several zones, each dedicated to particular themes and restaurants and the Ramoji Movie Magic which hosts interactive shows on cinema for guests. Behind Eureka, there is a butterfly garden, bird park and ‘international streets’.

“On your left is a pineapple garden,” announced our guide. “But I’d advise you to not eat the fruits here. You might have some issues with digestion.”

Sitting inside the red tram that ferries tourists, the crowd peered at the fake fruit and giggled. “Don’t worry, you can always go to our world-class hospital here on the right if you feel queasy,” the guide continued, egged on by the laughter. “But again, go inside at your own risk. You may find actors, not doctors, inside and they may or may not know how to conduct an operation on the human body.”

We were on a day tour of Ramoji Film City on the outskirts of Hyderabad. Spread over 1,666 acres, the complex was built in 1996 by legendary Telugu film producer Ramoji Rao and thrown open to tourists a few years later.

True to its name, everything in the film city is about show business, and the guide too played his part in notching up the hype. “You are among the first people to enter a jail without having committed a crime,” he declared as the tram went through a metal arch with the words Central Jail written on it. “Be careful, as the prisoners here are itching to break out of the four walls that surround them.”

Inside the jail complex were dummy prison robots shaking the bars of the jail doors simulating an impending prison break.

There are replicas of all sorts of real and imagined things inside the largest film studio complex on the planet (it has been certified by the Guinness World Records). The tour includes several familiar locations, such as a police station, a government building, a mansion and a vegetable market, as well as replicas of Indian tourist sites such as the Buland Darwaza in Fatehpur Sikri, the Taj Mahal in Agra, and the Brindavan Gardens in Mysore. This apart from sites that defy categorisation, such as a Japanese garden, underground caves and a children’s puzzle garden.

The film city claims close to 15 lakh visitors every year. And yet, Ramoji Film City is a shooting spot first and a tourist site later. At least 2,500 titles have used Ramoji’s sets since it was built, including the Hindi films Bade Miyan Chhote Miyan, The Dirty Picture, Krish 3, Dilwale, Ra One and Chandramukhi, the Hollywood productions Beeper and Quicksand, the Tamil movies Vivegam and Spyder and nearly every significant Telugu project.

“This is Rani Mukerji’s house from the film Nayak,” pointed out the guide as the crowd rushed to click pictures. A few seconds later, the tram stopped at a railway station. “This railway station is where films such as Chennai Express and Ranna were shot,” the guide continued. This is the MP building in Sooryavansham. This is the street where Golmaal and All the Best were shot… This is a typical middle class house – if you shoot from the front, it is the hero’s house, from the back it is the heroine’s house.”

The cameras clicked away. Stops for selfies were inevitable. 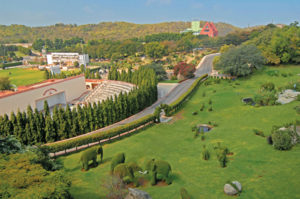 When a film unit decides to shoot at the film city, the location becomes temporarily out of bounds for tourists. Since the film city is spread over a large area, it is easy to hide shooting spots and restrict the tourist circuit to other sites.

Sometimes, film production units that use the plethora of empty spaces within the complex to build extravagant sets leave them standing when the productions have been completed. These sets are added to the tour. For instance, the remnants of the sets of SS Rajamouli’s Baahubali blockbusters, designed by Sabu Cyril, are now open to the public.

The film city has been conceived as a one-stop-shop – a supermarket, if you will – for producers. Everything from readymade sets and locations to film equipment and services are available at one place.

Media baron Ramoji Rao wanted to build a studio similar to the ones in Hollywood. “The motto was, walk in with the script and walk out with the canned film,” said a member of the film city’s administration, who did not wish to be named. “The idea was to help filmmakers save time and production costs.”

The dearth of studio backlots in India also fuelled Rao’s dream. “It was his passion,” added the executive. “He was a visionary.”

Once he procured the land in the early 1990s, Rao recruited the services of renowned art director Nitish Roy to design the complex. “I found the whole area very interesting,” said Roy, who credits include Shyam Benegal’s Bharat Ke Khoj, Govind Nihalani’s Tamas, Gulzar’s Lekin and Rajkumar Santoshi’s Ghayal. “At that time, there were only jungles and mountains. We started developing the site, but we didn’t cut a single tree. We planted trees, in fact. We didn’t blast a single mountain. That’s why today the tram goes up and down. We tried to stay true to nature as much as possible.” 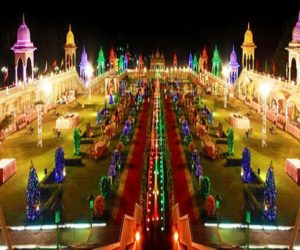 Since each film unit typically comprises 200 to 250 workers, the plots within the complex are at a distance from each other. “We also decided to build a central kitchen and dining room, such that if there are 20-25 units working at a time in the entire complex, they have a place where their food is served or distributed from,” Roy said. “We also realised the need for gardens. Many of the Hindi films and films in the south regularly feature songs, and they need big gardens with ample space where the hero and heroine can do their singing and dancing. That’s also one of the reasons why you see the different varieties of gardens in the complex.”

The film city has enabled the construction of huge sets, which is otherwise difficult in cities. “I’ve set up and designed a number of sets in my career,” Roy said. “Some of the best sets are the ones built in open air. They are very useful for shooting. There is natural light, the sunlight can be controlled. We thought of the whole thing together. We knew this would be the future. We also built most of the structures inside the film complex using reusable materials, hoping that every four years or so, they would be dismantled and rebuilt again. Weirdly, all that we built back in 1996 still stands today.”

The other advantage of a studio backlot is the luxury of working without interference. “These backlots provide not only the ready-made sets but the secluded environment that is necessary for production to take place without any constraints and with a single-minded focus,” the film city executive said.

The film city’s marketing team keeps tabs on productions planned in India. They contact filmmakers and make presentations about the facilities in the complex. “Apart from cutting edge filmmaking infrastructure, film crews are provided with all kinds of production facilities, numerous shooting stages, wide ranging props, set-making facilities, camera and lighting equipment,” the executive added. “They are also provided with accommodation in the budget hotels either in the premises of the film city or in the vicinity.”

It isn’t entirely surprising that a few years after it was built, Ramoji Film City was thrown open to the public.

“There is a clear tourism potential here, which we realised only after we built the complex,” the executive said. “Film stars are regarded highly by the general public, and we also felt that there was a growing public demand to get a glimpse of what most people call filmy locales.” 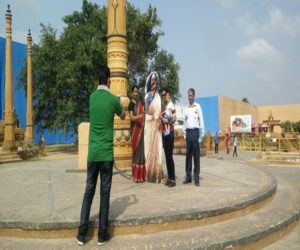 First thing every morning, the doorway of the majestic fort structure at Eureka opens up and a lavish ceremony is held to welcome guests. Dancers perform a medley of cultural and Bollywood songs to kickstart the filmi experience that the place revels in. Eureka is the epicenter of Ramoji Film City and the starting point of the tour. The area houses several thematic restaurants such as Alampana and Super Star, children’s play courts and fun rides. On the opposite side of Eureka, the face of Dadajinn – the mascot of Fundustan – leads one into a fascinating journey of rides and games meant for children. Several people dressed as cartoon characters welcome people to the area.

Apart from the movie sets, visitors who pay a minimum entry charge of Rs 1,250 can also visit theme parks, amusement rides, adventure games and shows. The film city also rents out its space for weddings, honeymoons and theme parties.

‘Come be our kings and queens in Ramoji Film City,” a disembodied voice announces at the central square of the complex.

Clearly, everything is about show business while you are at Ramoji Film City. And not just for filmmakers. #KhabarLive