Introducing Li-Fi technology, where people can seamlessly access internet in their smart devices using light to transmit data. Deepak Solanki, the co-founder of start-up venture Velmenni Research and Development Private Limited, is one of the pioneering figures in the ever-evolving space of Light Fidelity (Li-Fi) technology in India today.

What is Li-FI? In simple terms, Li-Fi is a technology for seamless wireless communication between devices using a light source like LED bulbs to transmit data. It is widely believed that Li-Fi technology can deliver internet speeds that are 100 times faster than conventional Wi-Fi. Solanki, however, argues that this isn’t necessarily accurate. “Li-Fi has the potential to achieve speeds in the range of 10s of Gbps (gigabits per second),” says Solanki.

From dial-up to broadband and finally Wi-Fi, the internet has dramatically evolved in terms of the volume of information available online and the speed at which one can access it. “Traffic from wireless and mobile devices will account for more than 63% of total IP traffic by 2021,” says this Cisco study.

Each of our devices will be connected to the internet, as we move into the Internet of Everything era. From vehicles sending out traffic-related information to sensors on a field delivering real-time information about soil quality, the internet is further extending its influence on humanity.

Is Wi-Fi up to the task of handling all that internet traffic? The short answer is no. What Wi-Fi essentially does is use radio frequencies to transmit wireless data. With the number of wireless devices (laptops, smartphones, or different kinds of sensors) increasing exponentially, the limited amount of spectrum is a real concern. There are security-related concerns as well, but the biggest challenge is limited bandwidth. Hence, the need for an alternative mode of communication.

This is where Deepak Solanki and his venture come into the picture.

Twenty seven-year-old Solanki was born and brought up in the city of Jind, Haryana. As the son of a government school teacher and housewife, Solanki grew up with a real passion for science and technology, especially robotics. After finishing school in Jind, Solanki went onto pursue engineering at Lovely Professional University in Jalandhar, Punjab.

What cemented Solanki’s interest in technology was an internship in the Robotics Research Lab at IIIT-Hyderabad. He worked there as a research intern, and in his words, “motivated me to continue to work in the domain of scientific research.”

After working in a robotics start-up at IIT-Bombay in 2011, he moved to Delhi in March 2012. By September 2012, however, he had formally registered Velmenni Research Development as a sole-proprietorship business.

“I wanted to start my own venture because I figured out that it takes a lot of time to develop and make anything in product form. I wanted to make real products. I had a keen interest in wireless communications. I have worked on radio frequencies, and am a HAM Operator (he holds an amateur radio license). So, after starting the company, my first area of interest was wireless technology. It was then when I came across Li-Fi/Visible Light Communication and found it rather fascinating,” says Solanki.

Despite this country’s collective obsession with engineers and technology, Solanki didn’t have many takers for Li-Fi. Everyone was tuned into the e-commerce boom, and many investors suggested that he should do the same.

“The first two years of Velmenni were the hardest. It was difficult to raise funds,” he tells The Better India. To sustain himself, however, he took up consulting gigs for various companies dealing in electronics until his start-up was accepted into the three-month Buildit Hardware Accelerator Program in Estonia. “They offered us seed funding and asked us to set up shop there,” Solanki adds. In October 2014, he moved to Tartu, a small town of just 104,000 people in the eastern European country. To the uninitiated, Estonia is a recognised global leader in digital technology with a robust pro-business environment.

“By 2015, Velmenni secured a deal with an Estonian entrepreneur in the lighting domain to integrate Li-Fi in their LED lights. We created a system that proved that the product worked beyond the laboratory,” Solanki told the Economic Times. He soon decided to enrol Velmenni into one of the biggest global start-up events called Slush in Helsinki, Finland, where prominent firms look for potential investment opportunities in start-ups. Despite not winning the competition in November 2015, Velmenni’s presentation was enough to impress a team from aviation giant Airbus. 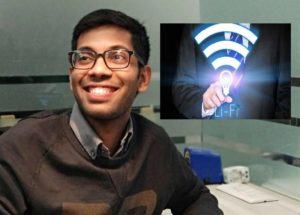 His firm was soon invited to join the aviation giant’s corporate accelerator in Germany for a six-month programme. Velmenni was part of only five start-ups invited for the programme in January 2016. “This programme was beneficial and it gave us a direction for our work, especially for the aviation industry. We created a proof of concept for wireless in-flight entertainment system using Li-Fi and presented on the Demo day in July 2016. We tested it on an A-350 flight mockup, and it was a huge learning experience for a company like us,” Solanki told KhabarLive.

With validation from Airbus, investments into his Li-Fi venture began to flow in. After completing the programme in July 2016, Solanki came back to India and set up an R&D lab in Delhi. Today, the start-up has 18 employees.

It requires two different sets of hardware devices (Li-Fi Access Point and Li-Fi Dongle) to set up a Li-Fi network–one that can be used indoors (inside a building) and the other for outdoors. The Li-Fi access point is very similar to what you have in Wi-Fi, which is essentially a router. “We plug the Li-Fi access point to a light source, which is LED in this case. The router is plugged in between the LED and the LED driver, and we have a USB dongle that can be used to connect with a laptop, desktop or smart devices,” Solanki tells The Better India.

Delving into further detail, he speaks of the tech dynamic at play. “Li-Fi Access Point needs to be connected to a LED light source. It can take data using ethernet cable from ISP provider and then modulate the light source on specific frequencies. LiFi Dongle has a photo-detector which converts light signal to electrical signal, and then it sends data to the Laptop using USB/Ethernet,” he says.

For outdoors, Velmenni has a separate set of devices, which replaces the optical cable infrastructure. “If I need to have connectivity between two points, I can have device A at one point, and Device B at the other point and both these devices can communicate through light. These devices can be plugged into street lamps, poles, and pretty much anything with a light source,” says Solanki.

Unlike Wi-Fi, where telecom companies have to run optical cables to set up the infrastructural backbone for internet connectivity, we already have light-based infrastructure in our cities, and Li-Fi can utilise that.

In the past three years, Li-Fi technology has evolved significantly. It is set to become an integral part of the country’s 5G infrastructure, alongside Wi-Fi. “At the moment, however, a major challenge is to receive data in low light conditions at higher speeds. Currently, we are working on solving those challenges by developing very high-sensitive receivers,” Solanki tells The Better India.

Another challenge is the price. Since the technology has not been adopted on a large scale, and mass production of Li-Fi enabled devices isn’t a reality yet, it is more expensive than Wi-Fi. Once this technology is adopted on a mass scale, the price points will be similar. It is imperative to note that Li-Fi isn’t out there to replace Wi-Fi, but compliment it, Solanki says.

Li-Fi can be used in areas where Wi-Fi is either prohibited or doesn’t work efficiently such as aviation, healthcare, environment etc. In the aviation industry, for example, Li-Fi technology brings a lot of value. One can use it in the cockpit securely without any requirement for cables. In fact, the primary advantage of Li-Fi is that it works in electromagnetic sensitive areas.

“It can be used where we need high-speed connectivity with more security,” says Solanki. Security is one of the biggest concerns with radio frequencies because if you’re sitting in a particular room, data can travel beyond it. Wi-Fi signals inherently cross walls and are thus susceptible to hacking.

Li-FI, however, is a lot more secure. “If the light source is in your room, the data will always remain in this room. If someone wants to hack into your system, that person will have to physically be in that room. In other words, Li-Fi works where Wi-Fi is prohibited,” Solanki adds. In a country, where internet infrastructure isn’t great, it becomes imperative for policymakers to address Li-Fi tech.

“There are areas in India where we cannot have optical cables, which means we cannot have high-speed internet connectivity. Such an outdoor light-based communication system can be used to reach such places. We are working with Indian companies where the proof-of-concept has been tested. We are now figuring out the way forward,” said Solanki at a recent lecture. Li-Fi is the future, and Velmenni is at the forefront of this technological revolution in India. #KhabarLive