A behind the scenes look at the erstwhile Zenana Mahal called Aiwan-e-Viqar, which is now known as Paigah Palace. The first glimpse of Paigah Palace in a quiet corner of Pattigadda is an arresting one and leaves one spellbound. As one enters the palace grounds where workers are milling about cleaning the place, the rays of the setting sun add a warm glow to its façade.

The front area has been converted into a function hall, but the palace which served as a Zenana Mahal in its heyday is reminiscent of its visionary builder. Aiwan-e-Viqar was built by the Paigah Amir, Sir Vicar-ul-Umra Bahadur, who was a grandson, son-in-law and brother-in-law of three Nizams. He was also the Prime Minister of the Asaf Jahi kingdom. The Zenana Mahal was constructed for his wife, Princess Jahandarunnissa Begum, elder sister of the Nizam VI, Mir Mahboob Ali Khan Bahadur. It was later inhabited by one of his grandsons, Paigah noble Nawab Nazeer Nawaz Jung Bahadur who was married to Princess Dawoodunissa Begum, daughter of the sixth Nizam. 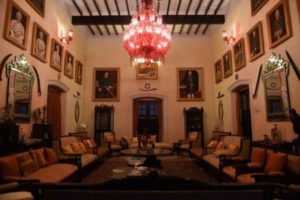 “In its prime, the Aiwan-e-Vicar was a complex of palaces which housed the ‘Mardana’ Palace, the residence of Sir Vicar, now home to the US Consulate and the Zenana Mahal among other palaces. After Sir Vicar gifted the Falaknuma to the Nizam VI, he built this palace on a site used by his father, Rashidudin Khan (Vicar-Ul-Umra I), who used it as a stop and resting place while visiting the British Resident in Bolarum from his City Palace,” says Obaid Ur Rehman, who currently inhabits the palace. The Paigah Palace has undergone many changes over time, but Obaid Ur Rehman, a descendant of Vicar-ul-Umra from his maternal side, has managed to retain the building’s rich legacy. While a part of the palace now houses the Chiran Fort Club, the rest of the palace is occupied by Obaid along with his two daughters, Asiya and Aafiya.

The Zenana Mahal is a mixture of Indo-Saracenic, Mughal and Neo-Gothic architectural features. It is a large two-storeyed neo-classical palace with a portico, semi-circular Mughal arches, corinthian columns, pediment windows and deep arcaded verandahs facing inwards which overlook a beautiful courtyard in the traditional Indo-Saracenic style. Interestingly, since it is a Zenana Mahal, the main entrance to the upper floors is through the inner courtyard, which is not used anymore. A carved wooden spiral staircase leads one to the first floor which is where Obaid and his family reside. 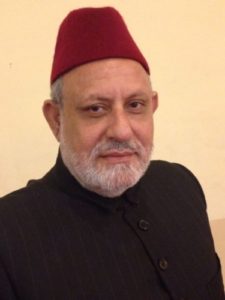 “Over the years, I have done the restorations on a large scale. There was water seeping in, the roof was in disrepair and the palace was in a dilapidated condition. Each and every aspect had to be looked into for repair and restoration,” says Obaid with a great sense of pride. The interiors of the room are how one would expect with traditional furniture and showpieces that have been handed down over the generations.

Paintings of all the seven Nizams adorn the walls of the main drawing room on one side and Paigah nobles on the other side, which are illuminated by a huge chandelier. A single painting of Jahandarunnissa Begum occupies one corner on the wall, while on the other corner is a painting of Sir Viqar-ul-Umra and Obaid’s mother, Sahebzadi Nazeerunnissa Begum. Scattered around the room are delicate figurines and heirlooms such as a silver paandaan and aab khasa (small storage cabinet), intricately carved sweet boxes among other knick-knacks which belonged to Obaid’s mother.

The rooms are huge; one of them is Obaid’s study which is brimming with piles of legal paperwork pertaining to the family’s properties. Obaid says he never saw the palace as a historical monument, for him, it is home. He fondly flips through pictures of his ancestors and pulls out one sepia-toned photograph of the Nizam with his grandfather, mother and her siblings taken near the fountain in the inner courtyard. With a keen interest in history, Obaid has also collected other photographs from the past eras which feature the Nizams and Paigahs.

ALSO READ:  KCR 'Bluff' On His 'Educational Qualifications' Rakes Up After It Got 'Viral' On Social Media

Parts of the palace rooms still remain closed and are only opened when relatives arrive for an annual get-together. Mostly, Obaid’s time is spent in the upkeep of the palace which, in his own words, “is a continuous process”. “The government unfortunately is not of much help since we live here,” adds Obaid. Though he lives alone in the century-old palace, he is never scared. “I have been living here along with my daughters for many years now. What’s there to be scared about, he asks and sets off to issue instructions to his palace staff. #KhabarLive