The advent of online cab aggregators like Ola and Uber in the Indian market has disrupted the taxi-booking market in its top-tier cities for the foreseeable future. In the early years of this decade, both customers and taxi drivers enjoyed significant benefits. 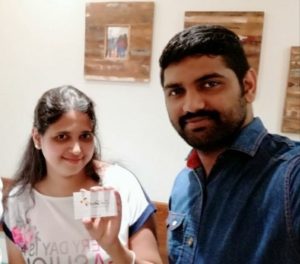 Customers were charged moderate prices with the added advantage of booking a cab at any time of the day. Taxi drivers, meanwhile, were seeing their incomes rise with the likes of Ola and Uber offering remunerable incentives.

Fast forward to March 2018, however, and the financial landscape for these drivers has changed significantly. Incentives have come down drastically, leading to a pan-India strike earlier this month. Government regulation, meanwhile, has been unable to catch up with the proliferation of what some call the ‘gig economy,’ leaving drivers at the mercy of India’s informal economy.

While the government is seemingly unable to bring these cab drivers into the formal economy, startups like Bangalore-based Cab Dost are making inroads.

Founded by Yamuna Sastry in 2015, this ‘social enterprise’ seeks to educate and assist cab drivers in filing their income tax returns, linking their Aadhaar details to their PAN card and other compliance related requirements, besides offering them necessary guidance on matters pertaining to banking, saving schemes and insurance. It was one of 400 startups selected for the Global Entrepreneurship Summit held last year in Hyderabad with Ivanka Trump in attendance. 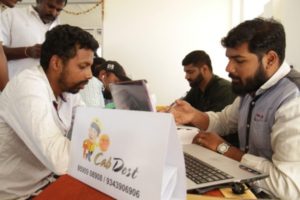 Founders of Cab Dost: Yamuna Sastry and Shafeeque T
Yamuna Sastry, Founder of Cab Dost with and Shafeeque T, Co-Founder
“We started Cab Dost in 2015 after conducting a six-month market research. When I was working for KPMG in 2011, many traditional cab drivers did not have PAN cards and bank accounts and were at the mercy of pawnbrokers while pledging cheques for immediate finance requirement. In my personal capacity, I helped some of them acquire the necessary documents,” says Yamuna, speaking to KhabarLive.

ALSO READ:  Why Autos Are Overcharging Against Tarrif To Passengers In Hyderabad?

Nearly four years later in an Uber cab ride, she found that little had changed and many were still unaware of IT returns, tax exemptions or TDS refunds, if applicable.

“App aggregators treat drivers as partners/independent contractors who are lured with incentives. More importantly, these drivers did not have a dedicated financial help desk to assist them. These apps have no processes in place to ensure drivers file their returns even though many fall above the exemption bracket,” she said.

The same problem, Yamuna argues, exists for taxi drivers operating out of airports. Even drivers who work for major corporate houses, ferrying employees from the office to their homes, work with third-party vendors. Essentially, what they found was that there were few attempts at paving the way towards financial inclusion for these drivers.

“We started after meeting more than 3000 drivers in person. We distributed flyers and started creating awareness in Bangalore. In 2016, it conducted a three-day Tax e-Mela on Radio City 91.1 and collected documents of 180 drivers through WhatsApp and filed their returns for free. Thus far, we have educated more than 12000 drivers and assisted 7000 drivers to file returns and helped them get a total refund of TDS of Rs 1.2 crore,” claims Yamuna.

A cab driver getting regsitered at a financial inclusion drive on the Bangalore International Airport Limited (BIAL) premises. 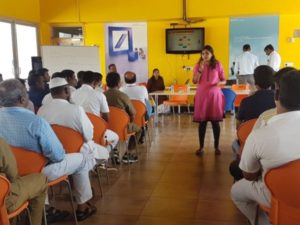 A cab driver getting regsitered at a financial inclusion drive at the Bangalore International Airport.

Today, Cab Dost is a full-fledged for-profit startup. Besides these campaigns, the startup charges drivers a minimal filing fee of Rs 500 as it requires a financially scalable model to reach as many drivers. If drivers are applying for loans, the firm charges additional costs for audited financial statements. The startup also educates drivers about the importance of savings for tax exemptions like life insurance, pushing them away from risky chit funds towards mutual funds, medical insurance, and other government saving schemes among other financial safety net tools.

A major instigator of the recent strike was that many were defaulting on their loan repayments.

Of course, they are defaulting primarily because their incomes are falling drastically with frequent changes in the incentive structure and opaque pricing, but better financial advice could help drivers avoid certain pitfalls.

To address this need, Cab Dost also runs a Financial Literacy Program that seeks to educate people on banking, net banking, CIBIL, NPA, BHIM and others.

“Post our first offline campaign, we also reached out to Uber and Ola. We have set up exclusive help desks in their offices. Throughout the year we make drivers understand the importance of a credible financial track record, collecting necessary documents and putting them on file,” says Yamuna.

The firm has worked in partnership with the CSR team of the Bangalore International Airport for the past two years. It hosted the first ever financial inclusion drive in the country for 2800 cab drivers, including filing IT returns and offering free facilities for free linking of PAN with Aadhaar card. “This year more than 1500 drivers registered for free ITR filing campaign,” says Yamuna.

“It’s important to file returns as it will validate the financial credentials of a person, particularly while applying for a bank loan. Normally, most drivers take loans from private financial institutions at high interest,” Shafeeque T, co-founder of Cab Dost, tells KhabarLive. “The firm helped many drivers link their PAN cards with Aadhaar number. The challenge was that most were from rural areas, and their names were spelt differently in each identity paper,” Shafeeque added.

Considering all the sensitive financial information Cab Dost obtains from their driver partners, the issue of data protection becomes paramount. “We have a very strict data confidentiality policy,” claims Yamuna, although no further details were forthcoming.

Even though the startup is a for-profit venture, Yamuna says they operate on marginal return. Most of the revenue, she claims, is reinvested into free IT-filing campaigns, spreading awareness on financial literacy for both taxi drivers and their spouses, besides organising career counselling sessions for taxi driver’s children post class X and XII.

What’s the road ahead? Cab Dost has started operations in Hyderabad, Mumbai and Kolkata. Last month, the startup tied up with RGIA-GMR Airport, Hyderabad, for a free PAN-Aadhaar linking campaign. “We want to take this forward to India’s top 10 cities, work with airports and corporations bringing greater financial dignity for this community,” says Yamuna. #KhabarLive