Established by Muhammad Quli Qutb Shah in 1595 when he founded the city of Hyderabad, the system of medicine was Unani and there was arrangement for day and in-patients as well. In its heyday, it was a two-storeyed building with multiple rooms. Just opposite Dar-ul-shifa is the grand old Qutb Shahi masjid.

When the hospital shut down, the building became an ashoorkhana called ‘Sartauq ka alawa’- a mourning place for Shia Muslims during the time of Muharram. Alams are displayed here every year. The iron ring which was tied to the neck of Hazrat Zainulabedin, when he was captured after the war of Karbala is preserved here. The iron piece was brought to the city by Agha Mohsin Irani from Syria during Qutb Shahi period. During Muharram, a pit called alawa is put on fire as a mark of respect.

The area is a densely populated one and is sort of an amalgamation of Dar-ul-shifa, Purani Haveli and Hussaini Mohalla. There are numerous Kuchas here as well such as Kuch-e-Topkhana, Kuch-e-Hajjam, Kuch-e-Siddiamber, Kuch-e-daricha, Kuch-e-Himmat Jung etc. 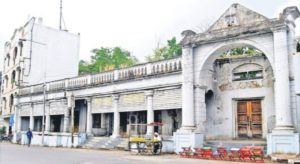 Azakhana-e-Zohra used to be the house of Syed Abbas Sahib. The seventh day Majlis was held here during Muharram every year. During the Musi floods in 1908, this house was untouched by the fury of the floods despite being close to the river.

The Nizam was quite surprised when he came to inspect the house. Soon enough, a beautiful ashoorkhana was commissioned and completed under the guidance of Nawab Zain Yar Jung Bahadur and engineer Mirza Humayun Baig, the interiors were done by Salamat Ali Khan.

The building was constructed in 1940 by Nawab Mir Osman Ali Khan and was dedicated to his mother, Amtl Zohra Begum. A beautiful building surrounded by a 12-foot high wall, there is a huge hall inside with no pillars. The ceiling height is 35 feet and about 5000 people can accommodated here.

On the south side is a stage whose walls are decorated with beautiful calligraphy. There is a garden with two fountains, a masjid and a marble minaret inscribed with poetic contributions of Rukn-ud-daula Tehwar Jung in the grounds as well. #KhabarLive