Defying all odds, Jameela Nishat stood up for millions of women. Jameela Nishat is a woman who can don multiple hats with the same ease. She is not only the backbone of Shaheen Women’s Resource and Welfare Association, but also an acclaimed poet and artist. Known to be a fearless lady, Jameela faced many hurdles to ensure justice to women who turned to her.

But, what made her start an organisation to cater to women and their problems? This is a story that traces back to the 1980s when she was working with Anveshi Research Centre for Women’s Studies and the whole country came to a standstill with The Shah Bano case. Being a woman who believed in equality of men and women, Jameela eagerly asked what the organisation is doing about it, and was appalled to know that they chose to remain silent because it was a highly politicised case. “I still remember the answer that shook me from inside. It was such an important case and I couldn’t understand how people could take it light,” she shares. 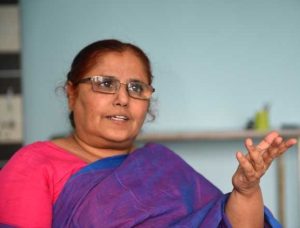 Jameela says it strengthened her will to work for women and so, she joined Asmitha. “I wanted to work with an organisation that believes in pro-gender justice,” she adds. After working for five years, in 2002, she registered the company Shaheen. “The time when the company got registered is also quite significant because the country was facing communal riots then,” she recalls. With so much happening, Jameela thought the time has come to empower women, which she knew isn’t an easy task.

Nevertheless, she worked relentlessly to achieve her goal. She chose Sultan Shahi area which was home to communal riots since Independence to set up her organisation. “During communal riots, women were always targetted and were looked at as commodities. That has what pushed me to work with women.” Sending across the message was a daunting task so, she started working with a school first, where Jameela would teach students English and also discuss issues like nikahnama and domestic violence. “The difficult task was to make the women speak about it,” she recalls.

The building from where Shaheen operates is a house that was burnt down in communal riots. “I didn’t find any better place to begin my work and thus began the never-ending journey,” she shares. The women’s activist says that she had to struggle a lot in the beginning. “When I was not in the office women would come and throw around the furniture, scaring young volunteers,” she recollects. She then decided to invite all mothers for a meeting because they were all suffering, facing violence. “After a couple of meetings, they said ‘we have suffered enough, we do not want our daughters to suffer’, and this laid a strong foundation,” she says.

Even though Shaheen was formed in 2002, its real birth happened in 2009, after they won a court case. It took a while to break the barriers. And now, Shaheen is a noted name with an interesting story behind it. In the initial days, when she was teaching painting to students, one girl painted a bird without wings. “I asked her ‘don’t you think something is missing’ and she quickly added a cage to it. After a month-long discussion, the volunteers came up with this name,” she says.

Jameela was very good at painting right from childhood, but coming from a typical middle class Muslim family, she was never allowed to pursue it. But, when it came to poetry, her family always encouraged her. “It just began with writing letters to my friends and, over the years, poetry just happened,” she shares. The activist says that she does not think and write as “I write about anything and everything”. “My poetry talks about triple talak, polygamy, domestic violence and other issues,” says Jameela and adds that when one looks through a woman’s eyes, everything changes.#KhabarLive