The ‘World Tourism Day’ observed on September 27, since the day was chosen as such in 1980 by the United Nations World Tourism Organisation. According to a 2017 report by the central Ministry of Tourism, Telangana ranks 7 in terms of number of domestic tourists, with a 5.9% share of the entire country’s domestic tourist visits.

Home to many historical monuments, waterfalls, amusement parks, temples, etc, Telangana has something to offer for everyone. On World Tourism Day, here’s a look at historical monuments of Telangana. According to a 2017 report by the central Ministry of Tourism, Telangana ranks 7 in terms of number of domestic tourists, with a 5.9% share of the entire country’s domestic tourist visits.

Charminar: This list would be incomplete without talking about the icon of Hyderabad. Constructed in 1591 by Muhammad Quli Qutb Shah, Charminar was supposedly built after a disease ravaged the kingdom. It is also called as the Arc de Triomphe of the east, owing to its architectural style. It has four 20 metre long sides, with four 48 metre high minarets. The Old city of Hyderabad was designed with Charminar at its centre. 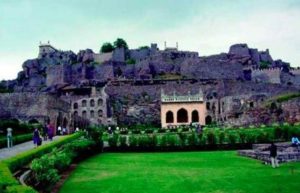 Golconda Fort: Originally built by the Kakatiyas, this fort on Golkonda hill in Hyderabad later came into the hands of the Qutub Shahi Dynasty, who later established the Golconda Kingdom. The fort was strengthened and expanded by the Qutub Shahi kings and it fell into ruin in the late 17th century, when the Golconda kingdom was defeated by Aurangzeb. The fort is one of the major tourist attractions of Hyderabad. 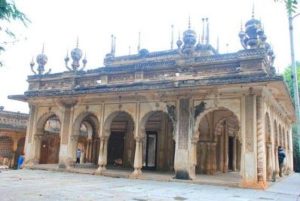 Paigah Tombs: The Paigah Tombs aka Maqhbara Shams al-Umara, is a necropolis belonging to the noble Paigah Family. The Paigah Family were fiercely loyal to the Nizam and held various high level positions in the Hyderabad state. These tombs are known for their intricate architecture decorated with exquisite carvings. Deceased members of the Paigah family are buried there even now.

ALSO READ:  King Of Fruits 'Mango' The Most Delicious And Sweetest! 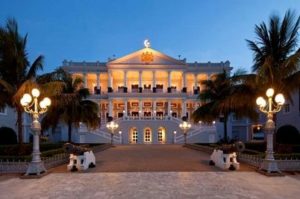 Falaknuma Palace: This beautiful palace, located over a 32 acre area in Falaknuma, was built by Nawab Sir Vikhar-ul-Umra, the Prime Minister of Hyderabad State in 1893. Built with Italian marble and exquisitely decorated with Venetian chandeliers and beautiful frescos, this palace has 60 rooms and 22 halls, including a giant ball room. The palace has now been converted into a luxury hotel. 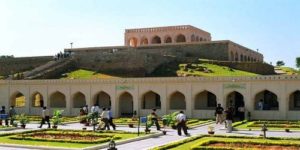 Taramati Baradari: This is a historical sarai (a travellers’ rest stop) built during the time of Ibrahim Quli Qutub Shah, the fourth Sultan of Golconda. Legend goes that the Sultan was in love with a courtesan named Taramati, who used to sing in the sarai. It is said that her voice could be heard by the Sultan at the Golconda fort, a few kilometers away. This structure was ingeniously built with 12 doorways providing cross ventilation and is a well known tourist attraction in Hyderabad. 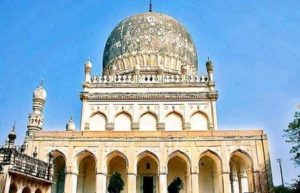 Qutub Shahi Tombs: Located in the Ibrahim Bagh area close to Golconda fort, these monuments are a collection of tombs built by various rulers of the Qutub Shahi dynasty. The tombs are domed structures on a square base, built in an architectural style that blends Persian and Hindu architecture. A visit to Golconda is incomplete without a visit to these tombs. 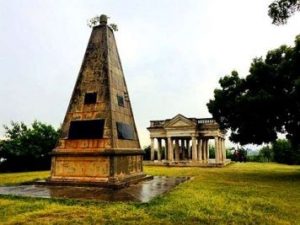 Raymond’s Obelisk: Located near Malakpet, Raymond’s Obelisk is the tomb and memorial of Michel Joachim Marie Raymond, who was a French general in the Nizam’s army. Popularly called Monsieur Raymond, he is credited with the founding of the Gunfoundry in Hyderabad State and was loved by the people here. Raymond’s Obelisk is a 7 metre high memorial built in his memory. The government beautified the place in the recent times and it’s worth a visit. 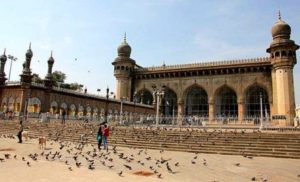 Mecca Masjid: One of the oldest mosques in Hyderabad and one of the largest mosques in India, the Mecca Masjid, located near Charminar, was built in 1694. It is also said that this mosque contains a relic of the Prophet Muhammad. The architecture of the mosque is just like that of Golconda, something that’s unique to the Qutub Shahi kings. 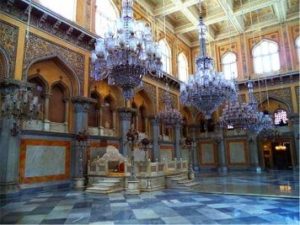 Chowmahalla Palace: The construction of this magnificent palace started in 1750, during the time of Nizam Salabat Jung but it was completed in the 1880s, during the reign of Afzal ad-Dawlah, Asaf Jah V. Known for its style and elegance, the Chowmahalla palace has two courtyards, many fountains and gardens, spread over an area of 12 acres. Influences of the Mughal, Persian and European architectural styles can be seen here. This palace was the official residence of the Nizams and it remains the property of Barkat Ali Khan Mukarram Jah. Jah renovated the palace in 2005 and since then, it is open for public. 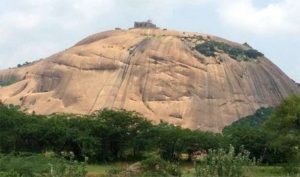 Bhongir Fort: This 11th century fort was built by the western Chalukya ruler Tribhuvanamalla Vikramaditya VI and subsequently, the fort was named Tribhuvanagiri, which later became Bhuvanagiri. The fort is located on a monolithic rock about 50 kilometres from Hyderabad. Some of the inscriptions found inside the fort revealed that the fort was ruled by the Chalukyas for a long time before it went into the hands of the Kakatiyas. It fell into neglect during the time of the Nizams but its proximity to Hyderabad makes it an easily accessible tourist attraction. 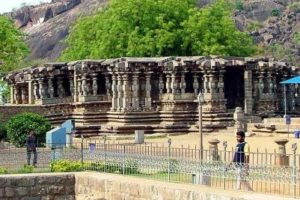 Thousand Pillar Temple: Located in Hanamakonda, Warangal, this temple was built by the Kakatiya ruler Pratapa Rudra 1, in the 12th century. Also called Rudreshwara Swamy Temple, this temple has intricately carved pillars, rock cut elephants, and is one of the finest examples of the Kakatiya art. 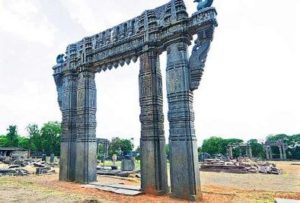 Warangal Fort: The Warangal fort complex is the remains of the great fort of the Kakatiya dynasty, and was built during Rudramadevi’s reign. This fort is also home to an intricately carved arch called Kakatiya Kala Thoranam. A depiction of this arch is seen on the emblem of the Telangana government. 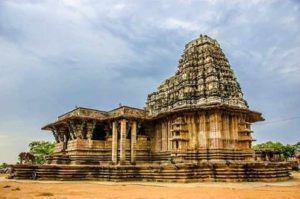 Ramappa Temple: Located about 77 kilometres from Warangal, the Ramappa Temple was built during the time of the Kakatiya ruler Ganapathi Deva. Built on a majestic six foot high star shaped platform, this temple is a Shivalaya with numerous, intricately carved pillars. It was named after the sculptor Ramappa who built it. The dance postures depicted in sculptures here helped the revival of the dance form Perini Shivatandavam.

Khilla Ghanpur: The Ghanpur fort, located in Wanparthy District, about 120 kilometres from Hyderabad, is a 13th century hill fort built by an ally of the Kakatiyas. It’s hilly location makes it a favorite spot for tourists and adventure sport enthusiasts.

Medak Fort: This fort built in Medak district by the Kakatiya Kings, served as an outpost for them and later for the Qutub Shahi kings. Inside the fort is a 17th century mosque built by the Qutub Shahis and it used natural topography to provide defences. Ruins of the fort, located on a hill, are worth a visit.

Pillalamarri: Unlike other monuments mentioned in this list, this is a natural monument. It’s an eight hundred year old banyan tree located in Mahabubnagar and is also home to a museum. The government has been taking care of this tree for the past few years and it is now a major tourist attraction.

Khammam Fort: Located on a massive hill in Khammam, about 220 kilometres from Hyderabad, this fort was one of the strategic forts of the Musunuri Kings. It later fell into the hands of the Kakatiyas, the Qutub Shahi kings, the Mughals and the Nizams. It was also under the control of Krishna Deva Raya for a period of time. The government declared it as a protected monument in 2005 and since then, it has been developed as a tourist attraction. #KhabarLive