Think red hot chillies, think spicy fumes oozing out of your ears, think Andhra and Telangana cuisine. Yes, we are talking of the hottest cuisine of India. These two states cover an expanse of cuisines, as there is something special and specific to the areas they gain their influence from.

While coastal Andhra offers prolific seafood, the north-eastern areas are happy with the use of jaggery to impart a sweet tinge to food. On the other hand, the southern stretch of Rayalaseema has influences of both Andhra and Karnataka, thereby offering a variety of rice and roti preparations, while that of Hyderabad sees a distinct Mughlai influence. Be it the royal cuisine of the Nizams, the famed Hyderabadi biryani or the popular bhuna gosht, the cuisine in these two southern states is bound to tantalize your taste buds. 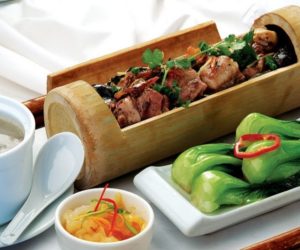 The diverse ethnic communities in our country include among others, many tribes who preserve their culture and culinary habits. Each of them has their own interesting recipes using local ingredients and offbeat cooking methods. Bamboo Chicken is one such dish, where marinated chicken is stuffed inside a bamboo stalk and roasted over fire. The tribal belts of Odisha and Andhra Pradesh are especially known for cooking their meat inside bamboo.

Known as Baunsa Poda Mansha in some parts of Odisha and Bongulo Chicken in Andhra Pradesh, the recipes use chicken or mutton as is locally available. Rice dishes cooked inside bamboo are also prevalent in some tribes of North-Eastern India.Travellers to Araku Valley or Ananthagiri located in the eastern part of Andhra Pradesh would have surely come across many roadside stalls preparing and selling bamboo chicken. Cylindrical bamboo stems with one side open are used here. 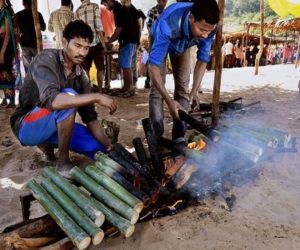 The chicken, chopped into small pieces, is marinated in basic spices and pastes of ginger and garlic for some time. After adding chopped onions and green chillies, the chicken is then pushed into the bamboo through the open side. Sal leaves are stuffed on top to seal the open end, and the bamboo is roasted on coal embers or firewood for about half an hour while periodically turning it while cooking.

As the colour of the bamboo turns black and cracks start appearing on it, the leaves are removed and the chicken is taken out by cutting the burnt bamboo. The smoke from the burnt bamboo gives a special flavour to this dish.

In Hyderabad, bamboo chicken is available in few Andhra restaurants, notable among whom are Ulavacharu and Vivaha Bhojanambu.

Also, there are a few street kiosks across the city who prepare and sell this chicken at reasonable rates. The exhibitions and fairs held in various parts of the city also have temporary stalls dishing out bamboo chicken. Sri Renuka Yellamma Talli (SRYT) stall near Eeshwar Theatre at Attapur does brisk business with the bamboo chicken that they prepare. 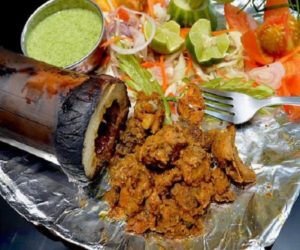 Chandra Mohan, the owner says that people from neighbouring areas love this preparation as it is completely oil free. He uses loads of spices including cumin, cinnamon, red chillies, and cardamom and the result is an extremely delicious dish. The bamboo chicken is available for `120 per plate. Kunda Chicken or chicken prepared inside a clay pot is another dish which is available at this popular kiosk.

Bongulo chicken is typically served on sal leaves with a dash of lemon as well as chopped onions. The dish can be enjoyed standalone or with rice or roti. Usually, no oil is added to the preparation making it a naturally healthy dish, and the masala is usually not very overpowering. While preparing the dish, it is important to see that the bamboo does not get over burnt, as the chicken inside tends to lose its moisture.

The unique proposition of the dish is that it makes use of very little oil. The chicken cooks in its own fat while lying there in the bamboo, preserving its aroma and texture of the spices.

Bongulo chicken attracts a lot of tourists every year. Once cooked, all that you have to do is to take it out of the shoot onto a leaf, squeeze some lime and you have it ready to consume. 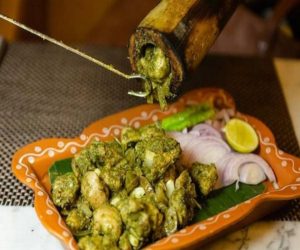 The special variety of bamboo chicken is prepared by stuffing marinated chicken pieces into bamboo stems. The stems are then placed on coal fire, allowing chicken to set in.
Bamboo chicken, a popular tribal recipe in Maredumilli Agency in East Godavari District, is the most-sought-after dish now-a-days even in multi-cuisine restaurants in Hyderabad and Bangalore.

“This place came into the limelight only because of bamboo chicken and the beautiful streams nearby. Between 2012 and 2014, the number of tourists had come down drastically, thanks to agitation over bifurcation,” says senior advocate and local tribal rights activist Mokkapati Prakash.

The special variety of bamboo chicken is prepared by stuffing marinated chicken pieces into bamboo stems. The stems are then placed on coal fire, allowing chicken to set in. No oil is used in the preparation of the dish. The process is chicken gets cooked with the moisture inside the bamboo. There are also varieties such as bamboo shoot curry and bamboo chutney. The ‘bamboo chicken’ has become a huge hit with the visitors and even foreign tourists are savouring it.

“From last one year, the prices of chicken have shot up and now a kilo of chicken is selling for more than Rs.350. We are charging Rs.70 per plate and per kilo chicken we can serve six plates”-said Ramu alias Ramareddy, a popular tribal youth in making bamboo chicken from last 15 years. His father Satyanarayana gets bamboo from near by forest once in fortnight or a month and wife Rani cooks the chicken along with Ramu.

ALSO READ:  Why Kalyani Beef Biryani Is A Favourite Of Many Hyderabadis - Muslim And Hindu? 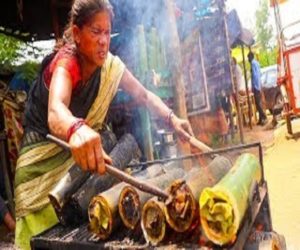 Bamboo chicken is prepared by marinating raw chicken with some spices, salt and chilli powder. The chicken stuffed into bamboo stalks as different pieces and cooked it on firewood. In this process, no oil and water added to chicken and it was boiled by absorbing moisture from bamboo stalk, giving a delicious taste to chicken. The dish served fresh soon after preparation and it is suggestible to consume immediately.

Each piece of bamboo stalk can only be used once to prepare the chicken. Bamboo chicken selling is becoming a profitable business as cost of per kg raw chicken is Rs 160 and after preparing as bongu chicken, it costs about Rs 350, which means more than 100 per cent profits are possible due to huge demand from tourists and picnic lovers for this delicacy.

Thriving business and large profit margins are attracting local fishermen into preparation of this delicacy. “Demand for this chicken witnessed considerably high particularly on Sundays and we are normally doing business worth Rs 10,000 on holidays,” said fishermen of Kalingapatnam beach M Appa Rao and A Ramudu. “We went to Araku and Paderu areas two years ago and stayed there for some time and learnt the process, returned here and started business,” they elaborated.

Most of the youth from JNTU-Kakinada, Aditya Group of Engineering Colleges from Surampalem, Medicos from KIMS-Amalapuram, Vishnu Colleges-Bheemavaram and Eluru, Narasapuram and even from S.V. University, Anantapur, Kurnool make a point in visiting Maredumilli only for Bamboo Chicken. 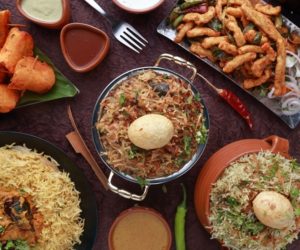 Naresh and 19 of his friends made an order last Saturday and landed up at Ramu’s Kitchen on Sunday afternoon after site-seeing. “We have ordered 20 plates of Bamboo Chicken, but there are three vegetarians, when we told Ramu about them we prepared a vegetarian dish with bamboo and capsicum masala”-said Kiranchandra from the batch.

Now it is all set to get huge market within the country with two multi-national companies making efforts to further popularize this tribal recipe. Recently, one of the leading multi-national company representatives visited Maredumilli forest and stayed in Eco-Tourism Guest House for two days and gathered all the information along with video clippings of processing ‘Bamboo Chicken’ and ‘Aloo dhum’.

John Fredrick, who worked General Manager in Taj Vivanta as food and beverages in Goa some time ago, along with his friends decided to launch a chain of traditional food centres all over the country with the support of some NRIs. For this, they selected ‘bamboo non-veg’, ‘bamboo-veg’ items. Some of the franchisees of KFC Foods, Bangalore, have also shown interest in taking tribal boys for preparing ‘Bamboo chicken’ in KFC restaurants. #KhabarLive