The 1857 war of Indian independence changed a lot of things; it changed one rule in the Church of St. John the Baptist in Secunderabad. British troops who were until then disallowed from bringing in their arms, were allowed to do so after the armed uprising. That is because their guns kept outside had once been stolen after the war broke out.

This was one among the many other interesting facts about the church that perhaps most of us don’t know. For a structure that has stood for 204 years in the city, the St. John’s church is lovely. One simply cannot miss the huge white structure while passing by it on the way to East Marredpally.

For those of you who don’t know, the Church of St. John the Baptist stands out among other Christian places of worship in Hyderabad. Not only is it the oldest church (204-years-old), it also has an amazing and perfectly functioning 108-year-old pipe organ which is used every Sunday during service. 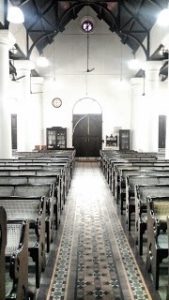 In the twin cities of Secunderabad and Hyderabad, the St. John’s church was the first one to be built for the use of British troops stationed in the city. Rev. J. Brackenbury was the first Presbyter in 1813.

Norman, one of the church’s office bearers, was kind enough to let me inside when I went there last week. There is a small wooden door on the left from which one can enter. What I didn’t realise then was that it was an annexe to the machinery of the 16-feet tall pipe organ, which occupies the space of a small bedroom in dimensions!

Anyone who has been to the church can see that it is very well maintained. The wooden roof, the brass plaques with names of Britishers who died, the pipe organ and the pristine condition gives the feeling that time has stopped inside. If you’re a heritage lover, it will most definitely bring a smile to your face. Seeing it so closely made me wonder why the church is not on the list of places to see for tourists.

IPP Prabhakar Rao (90), one of the church’s members, told me that most of the wood used to construct the roof is original (Rangoon/Burma teak), and has been unchanged since the church was built. “You see, it is Burma teak which has very good oil retention. Only a few rotten pieces here and there were changed,” he said, when I met him at house last week.

Prabhakar, former Superintending engineer with the Irrigation Department, and his brother took up extensive repair work in 1997/98 of the roof, as there were leakages. Immediately after, the church’s beautification was also taken up, he recalled. “There are GI sheets fixed on top to make the roof watertight on the easier slope and tiles on the steeper portion,” he explained, when I asked him how the wood is protected. 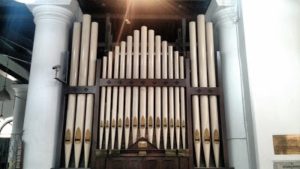 Whatever work had been done, was done well. Inside the church, the walls are white, there are no visible cracks (a common issue found in walls in most heritage buildings) and best of all, the Rangoon teak roof looks as good as new. All this is because the management of the St. John’s church takes good care of the historic structure.

I’ll add here that most old churches (across different cities) I visit have roofs made of Rangoon or Burma teak. And each time I hear that, it reminds me of my own connection to Burma (now Myanmar) and my family there (my paternal grandmother is ethnic Burmese).

The St. John’s church is in a cruciform built in Tuscan architecture. Most noticeable is the big blue cross on the belfry outside. Inside, the altar is to the east. On its left is the almost 16-feet tall pipe organ. Don’t be fooled by the 19 huge pipes in the front, because there are 758 pipes in the entire instrument in the rear, apart from the other machinery.

Unlike other churches with huge stained glasses, here, one depicting John the Baptist is fixed high above the altar. For anyone from Hyderabad, seeing this place will be nothing but pure joy. We’re so used to seeing Islamic architecture and its ubiquitous arches everywhere in Hyderabad, that I think we completely overlook Secunderabad’s colonial heritage and its history.

The church’s Baptismal font (inside) is a monolithic marble which is mounted on a finely-dressed granite base. The whole building was built in Surkhi mortar with 2-feet thick walls and the roofs are supported by modified round Tuscan round columns finished in Mughal plaster. Mr. Rao told me that construction began in 1811 and was completed in 1813. However, the church was electrified only a century later in 1914.

ALSO READ:  The Headless And Defunct Telangana Women's Commission Since A Year In Hyderabad 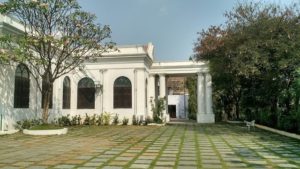 According to him, the belfry was added to the front porch in 1923, which was donated by Dewan Bahadur Ramgopal — an industrialist during the Nizam-era in whose memory the James Street police station was renamed to the Ramgopalpet police station later. Mr. Rao, a native of Kurnool district, has been going to the church from more than 40 years now.

He now stays in Secunderabad and is among the 400 plus members of the church. “Our congregation has members who are from different states in India. That is why the service is held in English,” he told me. To become a member, one has to get baptised there and accept that Jesus his/her savior and that he died for him/her.

Like the St. John’s church, there are other age-old Christian places of worship like the St. Mary’s Basilica, St. Thomas SPG Tamil Church, Wesley church, Wesley Garrison church and All Saints church in Hyderabad and Secunderabad — to name a few.

It is important that people also learn about this part of our city’s heritage, because, after all, the city is not just about mosques, dargahs, temples or Islamic architecture, but an amalgam of them. This is what makes our city unique. So dear Hyderabadis, the next time you pass by the St. John’s church, go inside and take a look, or maybe visit it on a Sunday to even see the amazing pipe organ being played. #KhabarLive