In the melee during the initial hours of battle for Golconda by Mughal forces, there was a complete chaos as the citizens of Hyderabad rushed pell-mell to take refuge in the impregnable fortress. The king Abul Hasan had already deserted the city and taken refuge inside the fort. Now, it was the turn of noblemen, royalty, workers, traders to make a mad rush to enter the fort which became a safe refuge from the Mughals.

This was the chance Khwaja Abid or Chin Kalich Khan, wanted to take. Chin Kalich Khan was father of the commander of Mughal army Ghaziuddin Feroz Jung and saw this as the perfect opening gambit: Rush inside the fort alongside the citizens and grab it. However, on January 28, 1687, a crude bullet fired from a camel-mounted gun by the sharp-eyed Qutb Shahi soldier blew off his right shoulder. 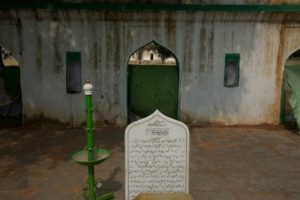 Ever the soldier, a profusely bleeding Chin Kalich Khan didn’t get off his horse and trotted back to his camp near the Himayatsagar Lake where the best Mughal doctors began tending to him. A few hours later, when Aurangzeb heard the news, he sent his prime minister Asad Khan to enquire about his well being. Asad Khan found the old soldier sitting with his leg outstretched sipping a cup of coffee as surgeons extracted bone fragments and stitched the wound. The surgery was to no avail and three days later, Chin Kalich Khan died. A few days later, soldiers who found his severed arm identifiable by the signet ring on the finger, buried the arm at the location they found.

Chin Kalich Khan is perhaps one of the very few persons to have two graves. While the bigger grave known as Kalich Khan Dargah lies on the banks of Himayatsagar, , the other smaller grave is a few kilometres away in a small enclosure. 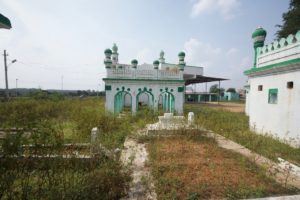 Chin Kalich Khan hailed from Samarkhand came to India and became a key courtier of Shah Jahan. He joined forces with Aurangzeb in the battle for the Mughal throne. His proximity to Aurangzeb can be gauged from the fact that when Chin Kalich Khan was convalsencing Aurangzeb told Ghaziuddin Feroz Jung that he will not eat grapes till the injured soldier recovers fully. Aurangzeb wanted to eat grapes with Chin Kalich Khan once he recovers.

The attacking Mughal forces led by Ghaziuddin Feroz Jung did conquer Golconda after a nine-month siege. Ghaziuddin’s eldest son Mir Qamaruddin Khan was first given the title of Nizam Asaf Jah; his dynasty was to rule Hyderabad till India’s independence.

The open enclosure grave is revered by locals who call it Kalich Khan Dargah. While the bigger grave is a walled garden with old tamarind trees dotting it, the smaller grave is virtually surrounded by housing colonies. #KhabarLive