Over one-fifth of the education loans given to nursing profession students in India have turned non-performing. Total education loan NPAs of state-run banks grew to 8.97 per cent as of 31 March 2018, from 7.29 per cent two years ago.

The NPA levels in the nursing sector are much higher than those in other education streams like engineering, medicine or MBA, data available with the government shows. 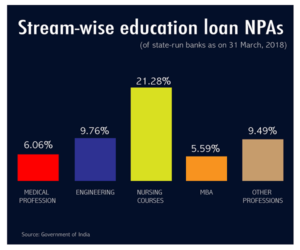 The alarming levels of NPAs in the nursing sector could make it difficult for aspiring professionals to get education loans as banks may become risk-averse and look to instead lend to other education streams.

“Those who enroll into nursing courses typically target to go abroad. But there are cases where they may not be able to get jobs overseas and settle for low paying jobs in India,” said a general manager handling the retail portfolio at a state-run bank.

“The remuneration they get in India may not be suffice to make repayments,” said the bank official on condition of anonymity.

He added that nursing aspirants are typically from the southern part of India and a couple of northern states.

Education loans have remained stagnant or contracted over the years in India.

Education loan has always been a risky segment for Indian banks, prompting the government to set up a credit guarantee fund to encourage banks to lend freely to students. This fund guarantees loans up to Rs 7.5 lakh without any collateral or third party guarantee. 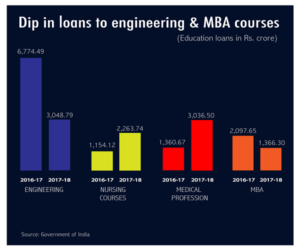 The data collated by the Indian Banks’ Association for the government further shows that while loan disbursements to professions of medicine and nursing have increased, there has been a sharp fall in loans to students pursing engineering and MBA.