Mandi (Arabic: مندي ) is a traditional dish originated from Hadhramaut, Yemen consisting mainly … among the Hadhrami people in the Malabar region of Kerala, Bhatkal of Karnataka, as well as Barkas and areas around Hyderabad, India. Arabs from Yemen are living in Hyderabad for over a century, but even Hyderabadis were not aware about their cuisine till a decade ago.

Their favourite dish Mandi is now gaining popularity not only among Hyderabadis but also attracting people from other parts of India. In fact, it is now becoming a routine dish at marriages in the city and is all set to compete with Hyderabad’s popular Biryani. 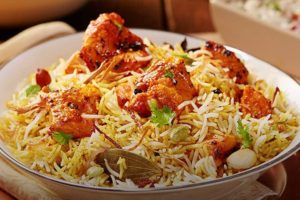 Mandi is the most popular dish in Yemen. Originating in the southern city of Hadramaut, from where Arabs arrived in Hyderabad during the Asaf Jahi era, Mandi derives its name from the word “nada” (dew), referring to the “dewy” texture of the meat.

Both the Quran and the Bible mention Bilqis, the Queen of (Saba) Sheba, who had ruled the kingdom of Marib in Yemen (around 1000 BC). Both holy scriptures mention that the land was blessed with abundance which the queen gifted to kings of neighbouring kingdoms. Among these gifts, special species from the land were included.

The culinary techniques make Mandi unique and special. In Arab houses, traditionally, the meat is cooked in the tandoor, a special kind of oven in which a hole is dug on the ground and covered inside with clay (similar to the Indian tandoor).

Then dry wood is placed inside the tanoor and burnt and the meat suspended inside without touching the charcoal, and cooked. But because of regulations at restaurants this kind of oven could not be set up here. So, the chef here cooks it as closely as possible to what the traditional Mandi would taste like.

To make this dish, many Arabic or Indian spices such as saffron, cardamom, cumin, cloves and cinnamon are used. It tastes even better if some pine nuts, peanuts, green chili and raisins are added on top. 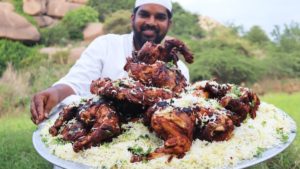 The credit for introducing this unique dish to Hyderabadis goes to Abdullah Masood Bashadi, who started to prepare Mandi commercially in 2011. He established a restaurant under the name of Mataam Al-Arabi in the Errakunta area. Mataam, in Arabic, means dining place. This was the first restaurant with exotic signage in Arabic.

Within years the dish became popular in Hyderabad and now restaurants serving exclusive Arbian dishes are opening in several parts of the city. Apart from mutton, Mandi is now available with chicken and fish too.

Abdullah Masood Bashadi said when he started the restaurant, his near and dear ones discouraged him, saying the people of Hyderabad are fond of spicy food while Arabian food is bland. Also, they doubted residents would give up their biryani for anything else, but from the very beginning the response was tremendous. 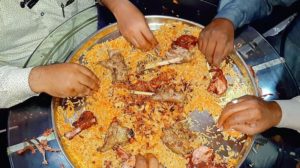 In these Arabian restaurants, apart from regular table and chair, you will also find an exclusive section where you must sit on the floor and dishes will be served in a large plate on chowkis (small pedestals). People sit in a circle around the dish and eat it with their bare hands. Four people can eat from a single huge communal plate.

Talha Alkathiri, a resident of Barkas said, “In our tribes, cooking traditional food is a very special art and for our traditional dishes we use very special spices, some that cannot be found here.” He said the dish becomes extra appetising when eaten with one’s own hand. In houses, a soup known as Maraq is served before the main dish, which is meat broth. The Mandi is served along with a traditional chilli-tomato sauce known as Sahawek. #KhabarLive

The ‘Great Resignation’ Of IT Industry In Telugu States