A bejeweled bird is pinned onto the ceiling of the Peacock Bar, an extension of the hotel’s central lobby. The bird, fittingly, is a peacock. Its encrusted tail winds around columns and pillars, spreading out in all its gleaming glory.

The stroke of grandeur set by the scene finds continuity in the surroundings—at a distance, an installation made with over 1,860 bangles moves to the breeze, reflecting in an artificial water body underneath. In another corner of the lobby, a triple-deck chandelier sparkles. Walking into ITC Kohenur, Hyderabad, is a visual blaze.

Koh-i-nur, in Persian, translates to a mountain of light. “Every element of ITC Kohenur is designed to represent the namesake diamond, which was mined from the Golconda mines in Hyderabad centuries ago,” explains PR Manager Paulaumi Banerjee. “The glass peacock is an ode to Shah Jahan’s peacock throne, where the diamond had once been mounted; the crystals on the bangles, the installations on the ceiling, and the layout of the space, all represent the shape of the Kohinoor,” she adds as she walks me to my room.

In my room, two things await me—the city’s famous chand biscuits and a cushion with my name monogrammed on it. An angular metallic pendant lamp dominates the sitting area, a wingback accent chair gracing the corner. Ceiling, carpets, walls, all incorporate the hotel’s preoccupation with the famous diamond. The most striking feature however is the diamond-encrusted tub in the center of the large bathing area, complete with a collapsible teak door. 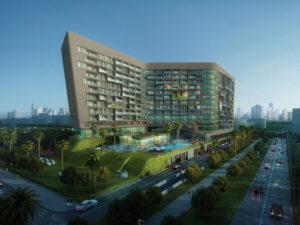 Every aspect of Kohenur’s architecture reflects its inspiration from the landscape of Hyderabad. The 5-acre property itself, shaped like a rock, blends seamlessly into the background of millennia old boulders. As I walk through the corridors and passages, I notice how local crafts—ornate paintings, zardozi cushions, bidri columns, lattice patterns—have been used to knit the story of the city’s cultural heritage while keeping intact the modern amenities.

Time passes quickly in Kohenur—evenings melt into nights, and nights into mornings. The interplay of colours in the sky, pronounced against the glitter of my surroundings, engages me. Other than the pool and the rooftop, you can also witness the transition from the Peacock Bar. It is especially fascinating in the evening, when the glistening peacock casts its azure reflection on the entire area. To soak the ambience in, I chose to settle in the maharaja chair with my drink—a cocktail of fruit bitters, vodka, and mint—and revel in some flânerie.

“Pardon me if I send you too much food, we Hyderabadis sometimes go overboard,” laughs resident chef Aamer Jamal. Within the violet and cream interiors of Dum Pukht Begum’s—one of the hotel’s four restaurants—I am preparing to feast on some iconic Hyderabadi cuisine. Resplendent with arches, columns, chandeliers, and crystals, the place feels like the drawing room of a Nizami haveli. 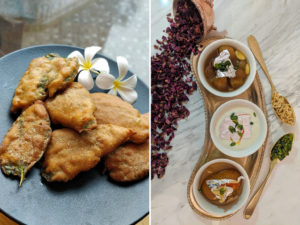 Chef Jamal behaves like an indulgent friend who not only lays out a dastarkhwan of kormas, saalans, kebabs and biryanis for me, also offering delicious nuggets of history on the side—culinary customs, and the legends behind the preparations. Stories, I realize, are a part of Kohenur’s grand ethos—fiercely guarded royal recipes painstakingly unraveled by industrious chefs; intricate, traditional art, showcased in modern forms across the property; discreet touches of luxury inspired by the Nizami lifestyle.

“At Kohenur, beds are aligned to the magnetic field and every room is radiation-neutral,” General Manager Tajinder Singh tells me, following a good night’s sleep courtesy some ultra-luxurious linen. Ethical, responsible luxury, it would seem, is the motto at play. At Golconda Pavillion, their all-day-dining restaurant, there is a conscious attempt to highlight lesser-known recipes from Andhra Pradesh and Telangana on the menu.

ALSO READ:  Second Edition Of 'Lock-The-Box-Sale' Is Back In Hyderabad

Betel leaf fritters, country chicken with chillies, lamb sukkha, prawns cooked with sorrel, and betta coccina fish in peanut gravy are only some of the recipes that F&B Executive Mukesh Rajakonda has brought to the fore. For those who want to go local, there are thick dosas, regional varieties of rice and payasam. Glasses, meanwhile, are filled with the exquisite Moët & Chandon—I realise I am thankful for Kohenur’s two well-stocked bars.

As I sit there relishing local delicacies and sipping on the rosé, I realise how the hotel, like this meal, is indeed an ode to the legacy of Hyderabad—royal and contemporary, all at the same time.

Essentials Doubles from Rs12,000, inclusive of breakfast; https://www.itchotels.in. In the city of nizams and nazakat, traditional-modern elegance has a new address at ITC Kohenur—in luxe interiors and on your plate. #KhabarLive