The Hyderabadi food is a bit like that of Indian sports, where cricket rises so tall, everything else becomes mere underbrush. Biryani occupies that position and everything else in the cuisine is relegated to an also-ran. You might protest this—you may have tried haleem, nihari and shahi tukde. However, there is so much more to Hyderabadi cuisine.

So where do you get to experience Hyderabadi cuisine beyond the run-of-the-mill dishes you find at the restaurants? Here’s the list: 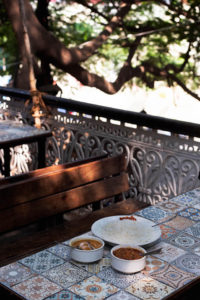 – Home lunch at Lamakaan
A cultural space with free wifi, Lamakaan has become an integral part of the Hyderabadi cultural landscape, as it hosts plays, concerts, lectures, and also has an organic market. It also houses a canteen that serves a typical Hyderabadi home meal of khatti dal, mutton kheema and rice. The khatti dal is a runny preparation of tur dal, given its tang using tamarind water, and tempered with mustard seeds, zeera seeds, garlic and curry leaves. The flavours of the dal are balanced by the spice and umami of the kheema. Khichdi, kheema, and ghee is a widely eaten breakfast combination here. Cost: Rs170-200. Contact: 9642731329 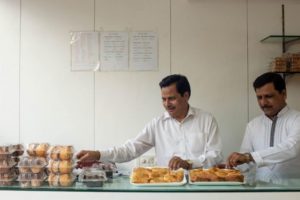 – Luqmi at Mountain Bakery
The luqmi, a crusty pastry parcel stuffed with meat, is the unique Hyderabadi version of the samosa. It seems samosas found its origin in Persia, where it was served with minced meat, dry fruits, and nuts in the court of the Ghaznavid empire. In Hyderabad, the luqmi is savoury, square-shaped and has more crust ratio than a samosa. It used to be the first course at wedding feasts but fell out of favour in the late ’90s. Luqmis are in the process of a revival now, mainly thanks to the owner of Mountain Bakery. MA Khader was one of the first to introduce luqmi to the menu in 2006. The fact that it is sold out in just a few hours proves that it is some of the best you may find in the city. Cost: Rs30. Contact: 9701007786 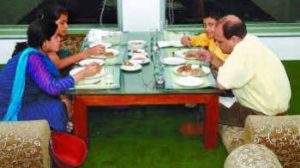 – Chowki dining with Dilnaz Baig
Till the early 1970s all meals in Hyderabad were served on chowkis or low four-sided tables, and people sat on the floor with bolsters to lean on. Now, everybody uses tables. But you can still get a taste of the traditional home-cooked food and the old-style setting at the home of one of the city’s well-known families. 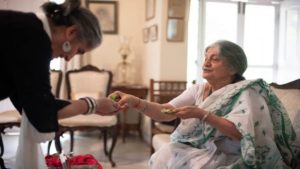 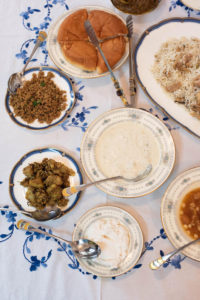 – Food demos and traditional meals with Parveen Khan
Parveen Khan’s mother Begum Mumtaz Khan was the doyenne of Hyderabadi cooking. She not only taught generations of Hyderabadi women, but also consulted with hotels across the country. Now, Parveen Khan is carrying her legacy forward. The author of the cookbook Hyderabadi Khasa, Khan opens up her ancestral home in Begumpet for demonstrations of Hyderabadi dishes such as the kachche gosht ki biryani or lagan ke kebab. It is followed by a three-course meal that includes lesser-known items such as tutak (baked mince and semolina starters), marag (spiced kid broth with lamb), chugar gosht (mutton and tender tamarind leaf semi-dry curry; seasonal), machhi ka khaliya (a tangy, spicy fish curry), sofiyani pulao (chicken and rice dish prepared with yoghurt, almonds, and milk), nimish (the whipped froth of full cream milk left out to collect dew overnight) and geelay firdaus—which means the mud of heaven—a milk based dessert with bottle gourd and pineapple. Cost: Rs4,000 per person. Contact: 9849070141 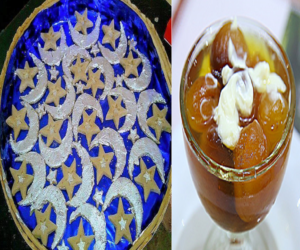 – Traditional desserts by Asra Anjum
Qubani ka meetha and shahi tukde might be the only desserts marketed as Hyderabadi desserts, but there’s a plethora of sweets cooked in Hyderabadi home kitchens. Both Badam ki jaali and ashrafi are akin in flavour to almond marzipan, while jaali is usually circular with intricate cuts to reveal the warq on the layer below, ashrafi gets its name because it looks like Nizami coins.

Both of these were once made only during marriages. Asra Anjum learnt to make jaali and ashrafi from her mother-in-law, and now makes them on order. Other Hyderabadi specialties include bot ka halwa (almond halwa), puran puri (the Hyderabadi version is richer, with khoya and nuts), ande ke lauz (baked egg dessert flavoured with saffron) as well as kaddu ke lauz (bottle gourd barfi with saffron, ghee, cardamom) and hab ke lauz (a white butter and almond sugar sweet), both of which take five days to prepare. Cost of badaam ki jaali: Rs1,100/kg. Contact: 9948686786. Orders available at 24-hour notice. #KhabarLive