You have met the child who works at your local tea-stall, scrounges through your garbage for plastic or metal, or works as a domestic worker at your home. Why are they not in school? Where do they get treatment when they fall ill? Why have government’s programmes for their care and protection not reached them? 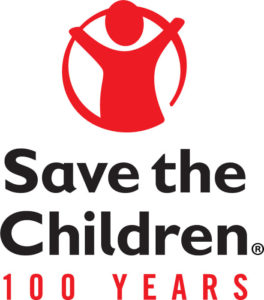 Rosy, for example, was about four and living in Hyderabad when her parents died. Her only sister, who was married off immediately after the death of her parents, committed suicide a month later. Rosy then started living with her sister-in-law where she wasn’t even given food at times. Even before she could settle there, this home too, fell apart when her brother’s marriage ended. An aunt took her and a younger brother but didn’t keep her for too long. Sent back, she had to take to rag picking for food and shelter.

“I started staying with an aunt in the neighbourhood – myself and another girl. They would wake us up at four and send us to pick garbage,” Rosy told #KhabarLive when she had turned 22. She would be required to work until 11 in the night and would get food only when she gave the garbage she had collected to her employers. 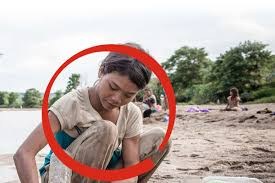 If this was not abuse enough, Rosy also had to face sexual harassment on the street. “I used to pick garbage and the men would look at us oddly and would comment in a way that made me very uncomfortable. We wanted to be away from the men who looked at us and the shopkeepers who beat us. But where could we go? We had to stay in their home. We had to pick garbage,” she said during a survey by Association for Rural and Urban Needy (Arun) and Save the Children India (STC).

It was only when she came back that she finally got enrolled in a school with an NGO’s help. Two years later, when her aunt came as her guardian the shelter home had to let her go. But Rosy was beaten and abused by her aunt, and sometimes even her aunt’s sons. While staying with her aunt and family Rosy started working with an NGO as a volunteer. She was able to escape the daily abuse only after she became a chef.

Rosy’s is not the only story of a cycle of abuse that street children go through. It is the story of thousands of children who land up on the street, vulnerable to abuse, either because the street was always their home or because their own families turned abusive. 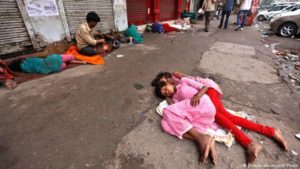 Although there are umbrella programmes like the Integrated Child Protection Scheme (ICPS) run by the government for street children, there is little that successive governments have done to even estimate how much resources we need to allocate to street children to end this cycle.

The report of the Sub-Group on Child Protection (11th plan) also identified this as a problem. “Street children or children living and working on the streets are a common sight in urban India. In spite of the relatively high visibility of street children, there is very little information available on their exact numbers,” the report said. So even though the government is trying to come up with measures for street children, the fact that there isn’t comprehensive data on their exact numbers presents a definitive roadblock.

Shubham, for instance, is now at a shelter home for children in Secunderabad. He had left the home to work but returned to it for studying. But before he ever came to a shelter home, he was subjected to abuse by the very authorities meant to protect him. 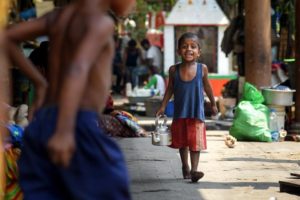 Shubham was often beaten up, sometimes with sticks, by policemen who accused him of theft while he was on the street. “When they hit me with that stick, my hand stopped working properly. I don’t feel anything here. Even if you hit me with a stone I can’t feel anything,” he says, remembering those beatings.

Sexual and physical abuse, child labour, lack of education and shelter isn’t the only form of violation of rights that street children are subjected to. It is all encompassing. Such is the extent of their suffering, that as per the ARUN-STC report, many do not even consider things like fever and diarrhoea as illnesses. “For them, illness is jaundice, tuberculosis etc.; the illness that keeps them in bed for longer periods of time. They share that diarrhoea is common and can last for up to two months, but that is not an illness,” the survey found.

The survey’s results are not surprising if we look at how many children are vulnerable or experience ‘difficult circumstances’ in India. The government report of the ‘Working Group on Child Rights’ (12th plan) too, acknowledges just how vulnerable children in the country are. According to the report, an estimated 172 million or 40 percent of the total children in India fall in this bracket. This number includes around 1,85,505 children (5-14 years) who are engaged in domestic work, 70,934 children working in various eateries, and an estimated 49,983 children repairing vehicles or working in auto-workshops. 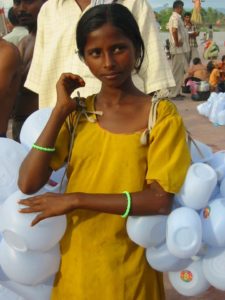 Even if we assume that most of these children go back to a home and family after work (which work would still be illegal), what is currently happening still isn’t justified. Rosy and Shubham didn’t have to be ‘vulnerable’ before being ‘rescued’. They should have had a safe and caring environment when they were rescued. They could even have been rescued faster if our governments were sensitive to the needs of street children; if it functioned responsibly for them. These children deserve better. It’s time the government recognised this fact.

Lakhs of children living on Hyderabad streets battle poverty, physical, mental and sexual abuse every single day. It’s time to change this. Raise your voice for India’s most vulnerable and Tweet your support! I advocate for rights of #EveryLastChild. We must stop the abuse of street kids. #TheInvisibles

(Editor’s Note: With #TheInvisibles, #KhabarLive and Save the Children India have joined hands to advocate for the rights of children in street situations in Hyderabad.) #KhabarLive