In pursuit of a better life, hundreds of workers from Telangana make their way to the Gulf, but the reality on the ground is far from the bright future they’re told to expect. Standing under the blazing sun, with sandy deserts stretching for kilometres around him, Veeraiah held the camera up and pleaded with authorities.

Almost breaking down, Veeraiah says that he alone was responsible for the upkeep of over 100 camels in Saudi Arabia and alleges that his employers repeatedly beat him and deny him basic amenities like food and water.

“Please help me come back to India. I’m from Karimnagar district…We are very poor They beat us a lot. Even my mother died and I wanted to perform the final rites and they are not letting me go. Please help me and take me back home. They are not even feeding me properly. My wife is in the hospital,” he pleads in the video.

Telangana sees a high amount of emigration cases, with many people travelling to countries like Saudi Arabia, United Arab Emirates (UAE), Oman, Qatar and Bahrain and Kuwait in search of employment.

Most of these migrants are unskilled or semi-skilled labourers, coming from rural backgrounds and hoping to carve a better future for themselves abroad.

They’re told that life abroad will bring riches and success to them and their families. Yet, the reality on the ground speaks to a far different future for these Indian workers.

Telangana is rife with fraudulent travel agents who promise an easy path to the Gulf for Indians, only to renege on their promises once it’s too late. Life there is not as it’s seems and oftentimes, they run into problems with the law and their dubious immigration status makes it hard for the government to support them.

Authorities have attempted to get involved to stop these agents but the flow continues unstemmed. For Veeraiah’s case, even KT Rama Rao, TRS working President, heard his plea and asked officials to intervene, but not all are so lucky.

The magnitude
Activists estimate that at least 10,000 persons from Telangana are migrating to Gulf countries each year from the Hyderabad International Airport alone.

As per the data compiled by the Ministry of External Affairs (MEA), in December 2018, there were more than 85 lakh Non-Resident Indians residing in six Gulf countries: the UAE, Saudi Arabia, Oman, Qatar, Bahrain and Kuwait.

People from Telangana and Andhra Pradesh constitute a large share of the 85 lakh, along with Uttar Pradesh, Rajasthan and West Bengal.

Srinu Janagam, Vice President of Indian People’s Forum, an organisation which works for the welfare of Indians in UAE, said that lack of employment sources in India coupled with debt from agriculture are the main reasons behind the mass emigration.

“Necessities and lack of awareness about the countries and nature of the work often lands the migrants in trouble. Fake travel agents dupe job seekers by claiming that they’re being issued a work visa, when they are actually issued travel visas, in order to be trapped by their employer once they land,” he tells #KhabarLive. 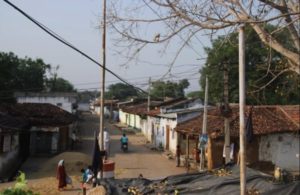 On the ground
Amidst a row of tiny houses in Marampally village in Nandipet mandal in Telangana’s Nizamabad district, one house stands out for its distinct iron roof. This is the house of 37-year-old Chouke Ramesh and it has witnessed only gloom for the last two weeks.

Ramesh, a labourer who had migrated to Riyadh in Saudi Arabia, was injured in a road accident and had been in a hospital in Riyadh for the past two months. His family learnt that he was declared dead on April 19, but it has been almost three weeks and they have no clue as to when and how his mortal remains will be returned to them.

The family has approached officials of the Telangana government, requesting early repatriation of Ramesh’s mortal remains. The Embassy of India in Riyadh has said that their office is actively following up the case for transportation of mortal remains at the earliest.

Ramesh was working as house driver since 3yrs in Riyadh, he left behind his wife Lavanya and two young kids. He went to Saudi as he was unemployed and debt ridden. In last call he apparently told the family that he didn’t like the work conditions.

Back home, Ramesh’s wife, 31-year-old Lavanya, who rolls beedis for a living, has two children to feed – a 11-year-old and an 8-year-old.

“He used to call us daily but after February 13, I stopped getting calls. We sensed something was wrong. We asked some people from our village who are there, in Saudi, and they told us he had met with an accident,” she says.

“My husband went there (Saudi) in search of a livelihood. We bought this place and had planned to build a new house. He stayed there even though he didn’t like the working conditions. He said he will come back in a year, but now he has gone forever…,” Lavanya trails off, holding back tears.

Ramesh’s dreams of constructing a new house and saving money for a better future for his children has fallen apart but his case is far from unique.

The fake or illegal agents
Like any other nexus, understanding the migration issue is not possible unless one looks at the middlemen: the fake travel agents, who are rarely registered with the government and take advantage of the circumstances of those who migrate.

Though the Telangana government has started the Telangana Overseas Manpower Company Ltd (TOMCOM) in 2016 in order to prevent fake travel agents and frauds and to ensure safe migration, agents continue to thrive.

Many gullible migrants are falling prey to fake or unregistered agencies and people who claim that they will arrange for an employment visa that the company will provide.

According to TOMCOM General Manager Nagabharathi, only 117 people who are currently living in Gulf countries are registered with them.

Though the Telangana state government earlier asserted that they will register cases against fake travel agents under the Preventive Detention Act, 1986, there is no separate law that deals with taking action against agents who cheat migrants.

According to eMigrate, an initiative of the Overseas Employment Division of MEA, there 15 illegal recruitment agents in Telangana and 507 in the entire country. However, observers say that hundreds of such illegal agents operate in Hyderabad and rural Telangana.

According to Srinu, who is an NRI based in Dubai and also works with Indian People’s Forum, morethan 8 lakh people from Telangana, mostly the northern part of the state, are working as labourers in UAE and in Saudi Arabia in the un-organised sector. It is also estimated that there are around 3,000 people serving jail sentences and most of the time, the offences they commit are due to lack of knowledge about the law of the land.

Many also end up suffering from health problems, with a recent report in TOI suggesting that around 28,000 migrant labourers from the state died in the last four years due to different health complications 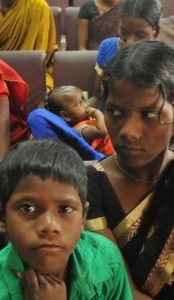 Is there a remedy?
For many unemployed youth in Telangana, travelling in search of a livelihood is often seen as the only solution. Just as fraudulent agents seek out the unemployed, these men and women are going in search of agents as well. Most hope the path will lead to a better life, only to realise they’ve fallen prey to an inhumane scheme.

Muralidhar Reddy Gangula, an NRI and a social worker, says that poverty, unemployment and debt are the main reasons behind the migrations to the Gulf.

Muralidhar, who has been based out of Mangaf in Kuwait for the last 20 years, adds, “In majority of the cases poverty, or the family’s debts compels many to think about the so-called better livelihood in the Gulf. A few who succeed and manage to build a house or marry off a sister or a daughter upon their return, becomes an example. The fraudulent agents then take advantage of the situation.”

He also said that the government should bring a mechanism that is able to identify and take action on illegal recruiting agents.

“As we get a passport only after a No Objection Certificate (NOC) from police authorities, there should be a stringent clearance mechanism which verifies the employer, recruiter and agents,” he adds.

According to the MEA, there are more than 500 Foreign Employers (FE) from six countries which were kept in Prior Approval Category (PAC) list. However, many say that trouble mainly arises in cases where a migrant is taken on a non-employment visa in the guise of an employment one.

The middle-eastern dream
The Gulf migration in Telangana started in the late 1980s as continuous droughts and agricultural distress pushed people to look for an alternative source of income. Over the span of three decades, there has been a gradual increase in the number of migrants, with even younger generations going abroad to work.

In Marampally village alone, locals say that there are around 40 young people who hold diplomas in hotel management and are currently working in these countries, in hopes of giving themselves a “bright future.”

19-year-old K Raju recently completed his diploma course and plans to join the others from his village who have migrated to the Gulf. “If I do the same job in a bar or restaurant here, I would not even get Rs 10,000 but in countries like UAE, I can earn up to Rs 50,000 per month. I can have a better future with good earnings,” he says.

When asked if he was going through a registered agency, he said, “I’m making efforts through individuals I know.” 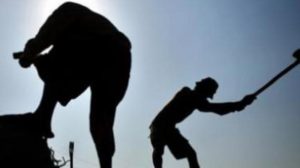 While this indicates that there is demand for skilled labour as well, like in the field of hospitality and hotel management, officials warn that even these migrations are not safe if the migrant has not undergone certain standard procedures.

Experts say that anyone who wishes to migrate to Gulf countries should do so through registered agencies licensed by the Ministry of External Affairs only. However, in the entire state, there are said to be only 25 such agencies, which are not enough to cater to the demand.

“If the aspirant goes through the registered agency, and then later an issue comes up, the respective country’s labour courts will issue directions and act as per the law. If the candidate has migrated with valid legal procedure and employment visa, our (Indian) government too can assist them and also help bring them back,” Nagabharathi says.

However, when these migrants do not have the proper documents, embassies are often left powerless and have to depend on the concerned country’s governments to solve the issue.

While these young people have big dreams when they leave, many are dejected and disillusioned when they return. However, in many cases, with no other alternatives to pursue, several are heading back to ride on the halted dreams with new hopes.

#KhabarLive spoke to several people who returned from UAE, Oman and other countries after working there as working as construction and sanitation staff for few years, and they said they’re left with no alternative than to head back.

Raisuddin Md*, a 27-year-old postgraduate migrant worker from Kamareddy’s SS Nagar, is planning to re-pursue his Dubai dreams. He came back home less than five months ago just to realise that he did not see a future here.

“There are not enough employment opportunities. If we want to survive here, we have to adjust with low wages, which will not be sufficient for anything. There is nothing here; if we want a good life and a good future, we have to head back and do something,” he says. #KhabarLive