Home-made pickles have made easy painstaking process of pickle making and it is an annual ritual that is still treated with ceremony. To Telangana nothing says ‘home’ as simply and reassuringly as pickle. Whichever part of the state you might hail from, pickle is likely to have been a part of your earliest food memories — as an incentive to make the staid combination of dal and rice seem more appetising; as a counterpoint to the cold comfort of curd rice or as a tasty accompaniment capable of weathering long train journeys. 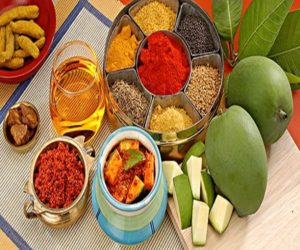 Pickling techniques and the finished product might vary vastly from region to region — Gujarat’s sweet chhunda mango pickle has so little in common with a hot avakkaya pickle from Andhra Pradesh that it’s hard to believe that they are made of the same fruit. But at the most elemental level, it’s clear that no matter what gulfs might separate the culinary customs of the country, pickle acts a bridge between them.

No Indian meal is complete without a smidgen of pickle. Although readymade pickles have made easy the painstaking process of pickle making, in many households, it is an annual ritual that is still treated with the ceremony it rightly deserves.

Back to the Beginning
It’s difficult to trace the exact origins of Indian pickle, but it is connected to the ancient art of preserving food by curing it with salt or sugar. Long before refrigeration and canning made it possible to preserve foods for a long time, ancient civilisations had discovered that the secret to increasing the longevity of perishable foods was to dry them in the sun and cure them with salt or immerse them in brine. 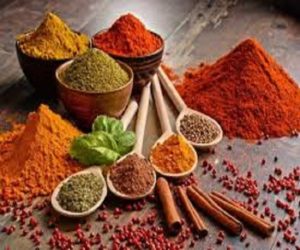 In fact, according to Western history, the tradition of pickling can be traced right back to the dawn of civilisation. Cucumbers, which are native to India and are believed to have grown wild in the foothills of the Himalayas, were carried westward to Mesopotamia, where they were preserved in brine. In the 1st Century BC, Roman emperor Tiberius is said to have been a tremendous cucumber aficionado, having them at his table every day.

To ensure availability all year around, cucumbers were grown in green houses and mentions of spiced and pickled cucumbers can be found in Roman historian Pliny’s writings. This is probably why pickles have come to be associated almost exclusively with pickled cucumbers (or gherkins) in the Western worlds.

The tradition of pickling may have also developed a solution to the problems of food scarcity and seasonality of produce. Perhaps that is why nearly every culture in the world has a tradition of preserves and pickles — Germany has sauerkraut or sour pickled cabbage, South Korea has kimchi made of cabbage, radish and other vegetables, Morocco makes preserved lemons and the Nordic countries have a long standing tradition of pickled herring, considered a delicacy in Europe.

ALSO READ:  The 'Happening Of Hyderabad' - Ravishing Yet Ravaged!

According to food historian KT Achaya’s A Historical Definition of Indian Food, it is clear that the repertoire of Indian pickles became highly evolved several centuries ago. “A Kannada work of AD 1594, the Lingapurna of Gurulinga Desika, describes no less than 50 kinds of pickles,” states Achaya. The most commonly pickled foods included not just wild mangoes, limes, lemons, brinjals and chillies but also pork, prawns and fish. 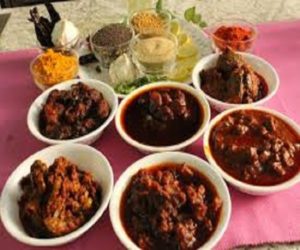 How Does Pickling Work
When you watch tart, whole lines treated with little more than salt and spices, transform into mature lemon pickle after a few weeks in the sun, it may seem magical. The scientific processes that increase the shelf life of salt-treated foods also simultaneously add depth and new dimension to their flavour. The natural process to thank for the flavour of most Indian pickles is anaerobic fermentation.

When vegetables or fruits are dried, cured with salt in airtight jars and left out in the sun, halophilic or salt tolerant bacteria naturally present on their surface digest the sucrose in the fruit or vegetable matter to produce by products such as carbon dioxide, acetic acid and lactic acid. Lactic acid is what gives yogurt its characteristic sourness and imparts a tangy flavour to them.

The acid that is produced acts as a natural preservative and prevents the growth of pathogenic bacteria that could cause the pickle to go rancid. Direct sunlight or adequate ambient light provides the warmth required for the bacteria to go about the business of fermentation. It takes anywhere between 15 days to a month for this process. 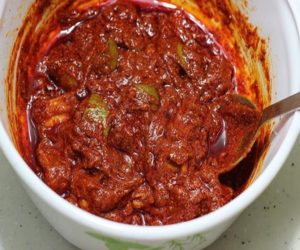 Attention to Detail
Certain precautions need to be taken for a pickle to mature and stay fresh for several years. Most importantly moisture is anathema to pickles. Even the slightest amount of moisture at the time of bottling and even after the pickle is mature, can invite mould to form on its surface.

This why all vegetables and fruits are thoroughly dried before they are cured with salt. It’s also why most Indian pickles are traditionally made in the dry months of summer, when humidity is low and adequate sunlight is available. Using sterile, non-reactive jars and dry ladles, good quality fruits, vegetables and other ingredients and precise proportions of sugar, salt and oil are also important for a pickle to taste right and last long.

Oil is added to several Indian pickles to increase longevity — it plays the role of the preservative. Oils that stay stable over long periods of time, such as mustard and sesame oil, are preferred. The herbs and spices that are added to Indian pickles don’t just enhance the taste of the pickle. Many of them have anti microbial properties that aid in digestion.

“Cumin and green cardamom are cooling, clove and cinnamon are warming, ginger is good for colds, while raw garlic is good for circulatory ailment,” explains Usha Prabhakarn, author of Usha’s Pickle Digest, a compendium of over 1,000 pickle recipes from across India.

In general, pickles should have a pH factor of less than 4.6, which indicates medium to high acidity, sufficient to kill most kinds of bacteria. While pickles made of naturally acidic fruits such as as mango and lime don’t require the addition of a souring agent such as vinegar or curd, alkaline vegetables, meat and fish do require a certain level of acidity, which is usually ensured by adding amchur (dried mango powder), vinegar or lime juice. 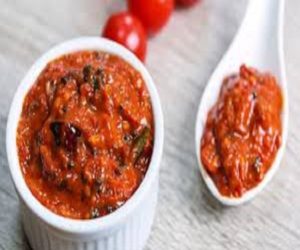 Types of Pickles
Given the wide variety of pickles available in India, it’s impossible to fit them into neat categories. One way of organising them could be on the basis of souring agents. Regional cooking in India is influenced by the souring agents that are commonly available in those regions.

Although readymade pickles have made easy the painstaking process of pickle making, in many households, it is an annual ritual that is still treated with the ceremony it rightly deserves. For instance, amchur is popular in north Indian cuisine, vinegar is preferred in Goa and tamarind dominates in the south. Many of these agents are also used in pickling and contribute to the subtle variations in regional styles.

Take cooked south Indian pickles such as the sweet puli inji for instance. The pickle made of fresh ginger gets its pucker from the use of tamarind extract (puli is Tamil for tamarind), which also contributes to its deep brown colour. Similarly, the sweet sour Bengali favourite tetuler achar is made by cooking tamarind extract with jaggery, mustard and other spices until it reaches a thick viscous consistency.

Although not as common, curd or bttermilk is also used as a souring agent in certain south Indian pickles. Sarsaparilla, a creeper with medicinal properties, which is called mahani in Tamil Nadu, is sometimes preserved in buttermilk. 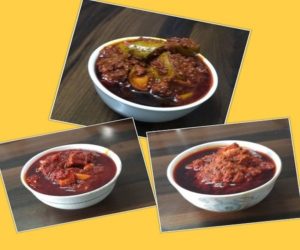 In contrast, Parsi pickles such as buffena, made out of a whole, ripe mango, and the rare and seasonal garabh nu achar, made with bhing fish roe, are distinguished by the use of sugarcane vinegar brewed in Navsari in Gujarat. Similarly, fiery Goan prawn balchao gets its characteristic acidity from distilled white vinegar.

Vintage Value
Although most pickles can be kept for years if they are stored in the right conditions, there are some that just keep getting better with age. The best known of these is the aged Punjabi pickle made of whole limes, popularly called kala nimbu ka achar or kala kagzi nimbu. This pickle requires no oil, simply ample sunshine.

ALSO READ:  ‍‍How To Pamper Your Father Amid Pandemic On Father’s Day?

Over several months, the spices such as ajwain and black pepper that preserve the limes, give it a distinctive black colour. The tough outer rinds soften and become wispy due to the natural acidity of the limes, giving them a paper like appearance.

This pickle, which is believed to have digestive properties, can last for several years without spoiling. The North East also has its own tradition of aged chutneys and relishes. In Naga cuisine, cooked soya bean (called akhuni) and fish are allowed to ferment for months in pots strung outside the house. After they are sufficiently aged, the akhuni or fish is smoked, or mixed with salt and chillies to make pungent chutneys, that take the place of pickle in meals. 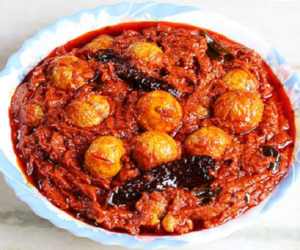 A Meaty Matter
Given the staggering variety of vegetable and fruit pickles that are available in India, it would be easy to believe that pickling is the preserve of vegetarians. However, non-vegetarian pickles made of chicken, mutton, beef, fish and other seafood has always been popular among certain communities.

For instance, East Indians and Parsis have a tradition of pickling dried Bombay duck and prawns, often using cane vinegar or distilled white vinegar. The Syrian Christians of Kerala pickle beef, while the Coorgi Hindus of Karnataka have a long history of pickling wild boar and pork using brine and spices.

In addition to the popular fermented bamboo pickle (called mesu), the North East also has a tradition of pickled meats, especially pork. The process of pickling meat does not vary very much. But meats such as mutton and beef are usually cooked before they are cured with spices and pickled using an acidic, souring agent such as vinegar.

The Problem of Plenty
We have a history of pickling in India, thanks to a wide variety of regional ingredients and the tradition of making pickles from scratch at home. However, the easy availability of commercial pickles means some of the more exotic flavours are in danger of being forgotten. 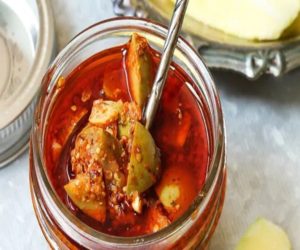 “Once common varieties of pickles such as raw jackfruit pickle and gongura (a kind of sour spinach from Andhra Pradesh) pickle are seldom encountered these days,” says author, professor and food expert Pushpesh Pant.

Traditional pickles such as vadu mangai, made of baby mangoes in brine, or kair sangri pickle, made of the dried beans and desert berries beans found in Rajasthan, are disappearing. With so much of our culinary history at stake, it’s worth forsaking store-bought convenience for the painstaking, yet ultimately rewarding experience of making your own pickles. After all, what you will be preserving is the taste of home. #KhabarLive