Hyderabad’s premier haleem-maker ‘Pista House’ announced that this year, their brand of the scrumptious dish would contain Chakhao – black rice sourced from Manipur. The rice also known as ‘Forbidden Rice’. 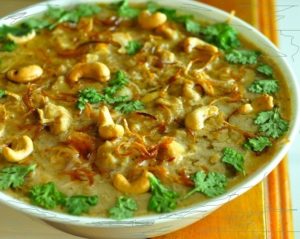 Black rice is a range of rice types of the species Oryza sativa L., some of which are glutinous rice. Varieties include Indonesian black rice, Philippine balatinaw rice, and Thai jasmine black rice. Black rice is known as chak-hao in Manipur, where desserts made from black rice are served at major feasts.

For centuries, black rice was forbidden for common people making it reserved for only Chinese royalty. However, it has always been part of various delicacies made in North East India. Traditionally known as CHAK-HAO in Manipur, black rice has emerged as a super food in recent time due to its high nutritional value.

Though black rice is nowadays cultivated in other parts of India as well, this black rice is darker and is having a special aroma and taste due to the soil condition and the pristine environment of north east India where it is grown.

Black rice is gluten free, gut-friendly, a natural cleanser, and is rich in antioxidants and dietary fiber. It is lower on calories but higher in protein content as compared to white rice. It is also a good source of iron, vitamins, calcium, magnesium, zinc and many other nutrients. It is believed to lower the risk of diabetes, cancer, heart disease and even help in weight loss.

Sticky in nature, black rice is also suitable for making PORRIDGE, DESSERT and SWEET DISHES. To know more, have a look at this video.

Rinsing and soaking the rice before cooking will help to bring the cooking time down. As a general rule, black rice should be cooked with two cups of water to every one cup of rice, and it will need to cook for 20 to 30 minutes after soaking, or up to 60 minutes if you cook unsoaked rice

There are some basic things to know about how to cook black rice. For one, black rice takes quite a bit longer to cook than white rice, about 60 minutes, though you can cut that cooking time down substantially if you soak it ahead of time ( at least 5-6 hours). For another, its black color will stain, so be sure that you don’t let it come into contact with your clothes.

According to restaurateur and Pista House managing director M.A. Majeed, black rice is healthier and consumed by Chinese royalty on account of its rich nutritional value. The black rice-enriched haleem, considered by many a Ramzan delicacy, is a collaborative effort between Pista House and North East Foundation.

ALSO READ:  Why Did 'Our Students' Became Criminals?

Majeed said each bowl would be priced at ₹170. This is an increase of ₹10 since last year.

There’s a new superfood in town: black rice, aka “forbidden rice.” Now even Walmart carries the stuff, which first made a spash in 2010 when a study suggested that it packs as many antioxidants as blueberries. But is it worth the hype? 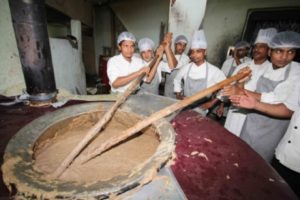 To find an answer, you’ll need to compare it to other grains, starting with brown rice: “Black has a nutrition profile that’s very similar to brown rice,” says nutritionist Jessica Cording. “They both provide fiber and some iron, but black rice has more vitamin E in it, which is an important fat-soluble vitamin.” (Meaning you need to pair it with a source of fat like avocados or olive oil in order for your body to absorb it.)