The recent demolition drive adjacent houses to Chandrababu Naidu’s house Praja Vedika in Amaravati makes Telugu Desam Party circles in jittery. With the Andhra Pradesh government going ahead with demolishing the Praja Vedika on the banks of the Krishna river in Amaravati, the YSRCP has said that its next target would be the rented house adjacent to the building, where Leader of Opposition and former Chief Minister N Chandrababu Naidu was staying. 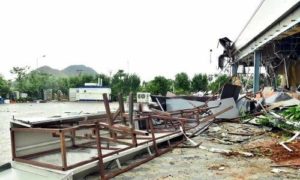 The residence, just 2 kms from the Prakasam barrage, was constructed by the Lingamaneni group, a construction firm close to Naidu. This, after Andhra Pradesh Chief Minister Y S Jagan Mohan Reddy on Tuesday alleged that his predecessor was living in an ‘illegal’ house. Addressing a meeting of District Collectors and Superintendents of Police in ‘Praja Vedika’, the annexe of Naidu’s residence, he declared that demolition of illegal structures on the banks of the river will begin on Wednesday by razing ‘Praja Vedika’.

On the second and last day of the two-day meeting, Jagan, as the leader is popularly known, alleged that Naidu as the Chief Minister not only lived in an illegal building but also built another structure (Praja Vedika) adjacent to his house in violation of all laws and rules.

Naidu’s action encouraged others to indulge in illegal constructions and as a result unauthorized structure came up along the entire stretch of the road at Undavalli, he said.

“The building where we are all sitting in is illegal. Starting tomorrow, this will be first building to be demolished. We want to send out a clear message. We will not stop at this. This entire road will be cleansed,” said Jagan. 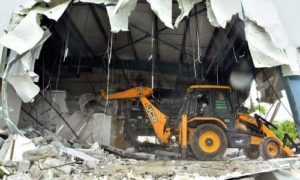 The YSRCP is also sending another message to the TDP chief; vacate the house peacefully or face eviction. The TDP is presently in a huddle, deciding its future course of action, even as Chandrababu Naidu has reportedly begun looking for a new house in the capital region itself.

Naidu’s residence, situated closest to the banks of the Krishna river

Naidu, who is President of main opposition Telugu Desam Party (TDP) had written a letter to the Chief Minister on June 4 to allow him to use ‘Praja Vedika’ to hold the meetings.

However, the YSRCP government on Saturday took possession of the building and the Chief Minister on Monday announced that it will be demolished.

Praja Vedika (people’s grievance cell) was built by the previous TDP government through Andhra Pradesh Capital Region Development Authority (APCRDA), in 2017, as an extension to then Chief Minister Naidu’s residence. Costing Rs 5 crore, it was being used by Naidu for official purposes as well as to hold party meetings. 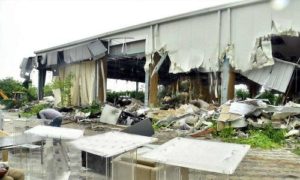 Naidu has been staying in the house at Undavalli on the banks of Krishna river since 2016 when Andhra Pradesh shifted its administration to Amaravati from Hyderabad, the capital of Telangana state.

A few days ago a legislator of ruling YSR Congress Party had said that Naidu will be made to vacate the house as it was built illegally. Alla Ramakrishna Reddy has already filed a petition in the High Court, seeking demolition of illegal buildings including Naidu’s house.

“Right in front of our eyes the Chief Minister stays in illegal building,” said Jagan.

As some senior officials interrupted to correct him, he went on: “The former Chief Minister stays in illegal building. Even if I stay, it is wrong. It doesn’t make a difference. We are in positions of authority. Is it justified for a CM, SP or Collector to do such a thing?”

Jagan said he deliberately choose this building to show how it was constructed by the government itself in violation of all rules. He said a letter by the Irrigation Department points out that the maximum flood level of Krishna river is 22.6 metres while the building was constructed at a height of 19.6 metres. “This building breached the River Conservation Act, Lok Ayukta judgments, Green Tribunal orders, Master Plan and building bye-laws,” he said. 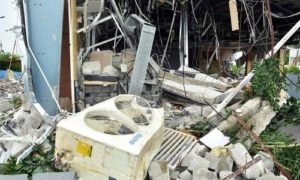 He asked Collectors and SPs to take up demolition of illegal structures in their respective districts and come down heavily on illegal activities, corruption and loot.

Jagan alleged that during last five years, there was open loot with illegal mining and sand mafia carrying out their activities. He said while effecting transfer of officials, he ensured that they are not only honest and efficient but also not leaning towards the TDP.

This was important, he said, as the system had collapsed during last five years with the TDP government making the Collectors and SPs the party.

“Is this the good governance, best practices and number one policing,” he repeatedly asked in an obvious taunt at the words used by Chandrababu Naidu. 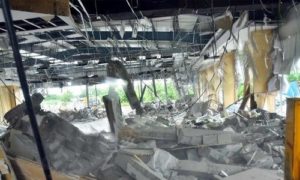 Jagan asked the officials to extend all the cooperation with MLAs in all matters, except corruption, illegal activity and looting.

He also advised the police to be friendly and transparent with people. “When somebody comes to police station, greet him with a smile. Show your teeth. We can’t be always firm. We need to relax a bit. We including me are public servants. We are not rulers. Once it gets into our head, 50 percent of the problem is addressed,” he said. #KhabarLive