If you’re in Hyderabad and don’t know what to do with yourself over the weekend, here’s an idea. Spend an hour or two exploring the surreal expanse of rocks at Fakhruddingutta.

With vast sheets of granite, scatterings of surreal boulders, caves under rock piles and three religious shrines, this ancient rockscape overlooking Hyderabad is an ideal place to kick back and relax for a few hours. 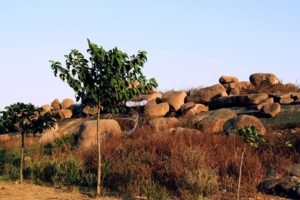 Ancient remnants from when the earth was young
Drive up the winding unpaved road to this solid sheet of granite, and you leave the present—with its bustling roads, narrow bylanes and petty human concerns—behind. As the rocks rise into view, you glimpse how the earth must have looked to our ancestors in the trees.

And when you realize that these rocks formed when the earth’s crust cooled, it hits home how insignificant our story is, compared to theirs. Over the eons (geologists say 2.5 billion years, give or take a million), these remnants of the earth’s youth have been weathered into the strange shapes and positions they stand in now.

Interesting experiences for different tastes
If you’re looking for an amusement park or tourist facilities, abandon all hope. But what you will find is a breathtaking expanse of rock, with lots of boulders under which to have a picnic. If you’re adventurous, many of the boulders can be climbed, at least to some extent. One side of the granite sheet even has natural caves, created by massive boulders jumbled together, that are deliciously mysterious. 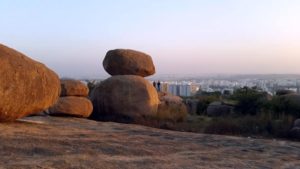 Of course, the 620-meter high hill also gives you sweeping views of the surrounding localities of Khajaguda (with its little lake), Manikonda and Narsingi, and—far in the distance—Golconda Fort and the Qutb Shahi Tombs. The Narsingi side is particularly nice, with vast swathes of land still green and undeveloped.

How to find your way there
This place is a little out of the way, and even many locals who live in the area don’t know about it. So don’t count on getting decent directions until you’re nearly there. With lots of posh townships coming up not far away, this somewhat downmarket place has been all but forgotten.

If you plan on using Google Maps to navigate, search for ‘Dargah Baba Faqruddin Rahmutullah Alaih’. Searching for ‘Fakhruddingutta’ will inexplicably direct you to the office of the Society to Save Rocks (though, on further reflection, this is understandable, considering the Society has been working for over 20 years to preserve this and other incredible rock formations in Hyderabad). 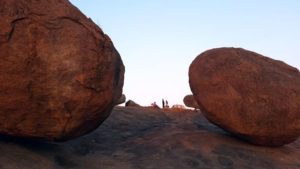 If you prefer to trust your internal compass, then here are some directions to help you get there.

After about one kilometre, turn left after Delhi Public School. After another kilometre, turn right at Niharika Exotica apartments (this will take you off the main road)

About 200 meters into the lane, turn left at Spring Spree apartments. Continue onto the unpaved track that winds up the hill.

Another 200 meters on, at the fork in the road, turn left to take the rocky road up to the dargah, or turn right to take the road the temple (the temple road has better parking, and everything is accessible on foot from there). 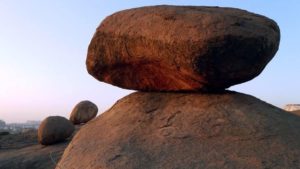 Ancient and immortal—until now
Rock figures like these—ancient, all-seeing and immortal—may well have been the inspiration behind our concept of gods and infinite entities. But Fakhruddingutta, and granite formations just like it in and around Hyderabad, are under threat from all sides. They are slowly falling prey to the god of progress.

Quarries, builders and citizens themselves are picking apart these remnants of ancient earth, one by one. Fakhruddingutta itself, with a massive quarry on one side, the upmarket Lanco Hills development on the other, and various other parties claiming ownership of bits and pieces of the hill, would have disappeared a long time ago. Luckily, the Society to Save Rocks has been campaigning for over 20 years to have the area protected under the city’s heritage rules.

Sadly, the heritage rules themselves were recently rewritten, leaving all the city’s magnificent rock formations vulnerable again. So if you’re thinking of taking a look at Fakhruddingutta, do it quickly. It might not last much longer.#KhabarLive