As the production of the Mahindra Thar comes to an end, a limited special-edition collectible pays tribute to the iconic off-roader. For those who’ve had the fortune of owning one, it’s the end of an era. But there’s also excitement in the air.

“Rain, wind, slush, mud, sand, highways…you name it, the Thar can do it,” says Swasthik Punjathody, an avid Thar fan. For decades, Mahindra Thar has been the choice for Indian adventure enthusiasts. Drawing on the appeal of retro jeeps, the Thar filled a crucial gap in the Indian automotive industry — a basic, 4×4, off-roader that could withstand any and every obstacle in its path but didn’t burn a hole in the pocket. And it only helped that the car looked stunning. As Yatish Wandrer, another Thar lover, puts it, “Everyone loves their vehicle, but very few vehicles love their owners”.

ALSO READ:  On 'Women’s Day', A 'Mall' Providing 'All Women' A Chance To Celebrate With Their Besties 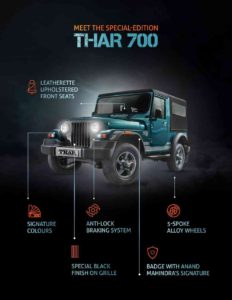 Now, nine years after it first graced Indian roads, the production of the original Thar is coming to an end. For those who’ve had the fortune of owning one, it’s the end of an era. But there’s also excitement in the air. With the Thar, Mahindra amassed a loyal following, and now it is making Thar lovers a part of the fitting send-off it has planned. As a tribute to the iconic original model, Mahindra is launching a special edition Thar, of which only 700 units will be under production. Retaining the classic Thar look, the Thar 700 will come loaded with additional features.

Simply put, the Thar 700 is the culmination of Mahindra’s rich automotive heritage built over the past 70 years. As the last of the traditional, old-school, off-road SUVs produced by Mahindra, the Thar 700 is a must-own collectible for Indian adventure enthusiasts. To know more about the Thar 700, click here.