The State Bank of India (SBI) maintains a secret number-based record of donors who buy electoral bonds, and the political parties they donate to. Law enforcement agencies can request access to this record.

In February 2017, then Finance Minister Arun Jaitley stood before the Rajya Sabha to justify his government’s decision to open the floodgates for anonymous corporate donations to political parties. 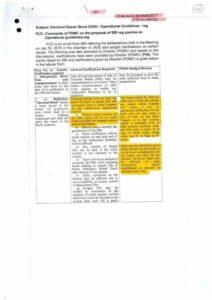 Under the freshly unveiled electoral bonds scheme, the government had offered complete anonymity to those making donations. A donor could now anonymously buy a bond, and deposit it with the political party of their choice.

“How much each donor has distributed to a political party would be known only to the donor,” Jaitley later claimed in a blog post.

In April 2018, when bought two bonds worth Rs 1,000 each, and reported that they actually carried a secret alphanumeric code that was visible under UV light, the ministry of finance issued a press release.

“This number is not noted by the SBI in any record associated with the buyer or political party depositing a particular electoral bond,” the government claimed. “It is thus not linked to any party transaction when the Bank issues a bond to the buyer. As such the number is not being used nor can be used to track the donation or the buyer.” SBI, in this instance, refers to the State Bank of India — the only bank authorised to sell these bonds.

Now previously unpublished documents, obtained by transparency activist Commodore Lokesh Batra (Retd) and reviewed by #KhabarLive, conclusively prove that — contrary to the government’s assertions — SBI does use the alphanumeric code to keep track of who bought how many bonds, and the political party to whom the bond was eventually donated.

This mechanism of tracking these bonds, the documents reveal, was approved by the Finance Ministry. The rules governing electoral bonds require SBI to share this data with law enforcement agencies if required. 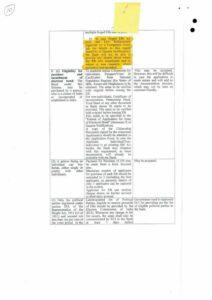 Some of these enforcement agencies, such as the Central Bureau of Investigation and the Enforcement Directorate, have been in the eye of a storm recently, with opposition parties accusing them of working on the behest of their political masters.

This disclosure, supported by documents reviewed by #KhabarLive, proves that electoral bonds don’t really provide a donor with anonymity from the government of the day. In fact, the only people in dark about the source of these donations are the Indian public and opposition parties.

ALSO READ:  Much Hyped And Prestigious 'Kaleshwaram Project' - Will This Sink Telangana’s Economy?

Yet, in a debate in Parliament, Jaitley insisted that providing donors with anonymity would create a level playing field by allowing opposition parties to collect political funding.

“If a government frames a law that helps even the opposition, it shows how big a heart it has,” Jaitley said.

The official records, minutes, notes and correspondence from 2017-19 reviewed by #KhabarLive expose the hollowness of these claims.

Anonymity Farce
When the electoral bond scheme was first announced in Finance Minister Jaitley’s budget day speech on February 1, 2017, the government had no idea how these bonds would actually work.

It conducted perfunctory consultations with the Reserve Bank of India, the Election Commission of India and opposition parties, but disregarded their suggestions. 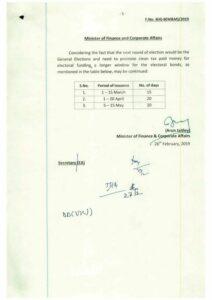 A year later, in January 2018, internal file notings of the finance ministry show, it drew up a basic conceptual framework for the bonds and then held consultations with SBI to figure out how to run the scheme.

In a meeting with the finance ministry on January 16, 2018, SBI explained these bonds would necessarily need serial numbers to identify the buyers and recipients of these financial instruments.

“Electoral bonds will not bear the name of the buyer or payee, but will necessarily need a serial number,” bank officials said at the finance ministry meeting, according to internal notes of the ministry.

Without the serial numbers, the bank explained, there would be no audit trail available for internal control and reconciliation of the bonds by the bank. If courts and law enforcement agencies asked SBI for details on the purchaser of the bonds, the bank would have no answer. Without unique identifiers, the bonds could be forged, and accounting for them would be impossible.

Yet, the serial numbers intended to ensure the integrity of electoral bonds would also mean that the SBI would have absolute clarity on the path of taken by these bonds — from an individual or corporate account from which they were purchased, to the account in which they were eventually deposited.

The donor would be granted anonymity from the public, but not from the SBI. Records show the finance ministry agreed with the SBI.

“Bank (SBI) may be allowed to put a serial number on the bonds to avoid these complications for the banks and also for the scheme,” senior officials of the Finance Ministry said in their internal notings. “However, the bank may be advised to keep information highly confidential to prevent its leaking in any way.”

The rules governing electoral bonds require the SBI to divulge these details if the enforcement agencies ask for them. 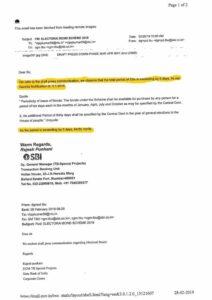 Section 6(4) of the January 2, 2018 notification read, “The information furnished by the buyer shall be treated confidential by the authorised bank and shall not be disclosed to any authority for any purposes, except when demanded by a competent court or upon registration of criminal case by any law enforcement agency.”

The rules do not lay out more details about the criminal cases. This leaves a window of ambiguity open on how and when enforcement agencies can demand the data from SBI. The rules also do not require either the political parties or the donors to be intimated by the government or the SBI that their promised secrecy has been breached by the government.

Caged Parrots
Could a government of the day gain access to SBI’s transaction records on electoral bonds?

The fact is that the bonds are completely traceable and the rules to keep them out of the hands of enforcement agencies — who have a documented history of deferring to the government of the day — are not water-tight. The Central Bureau of Investigation, for instance, has been described as a “caged parrot” by none other than India’s Supreme Court.

Further, the documents accessed by #KhabarLive, suggest SBI, the steward of the electoral bond scheme, has continually deferred to the instructions and directives issued by the Ministry of Finance, to the extent of breaking the law as long as the ministry signs off on it.

The bank does not even respond to Right To Information queries without the approval of finance ministry, despite being designated an independent public authority under the RTI Act.

In February 2019, when the Union government pushed the SBI to extend a special window for the sale of electoral bonds in the run-up to the 2019 General Elections, the bank pushed back but soon quickly complied.

As per the rules, the SBI earmarks four 10-day windows a year for donors to buy electoral bonds and donate them to the political party of their choice. The rules permit an additional 30-day window in years when general elections are held. 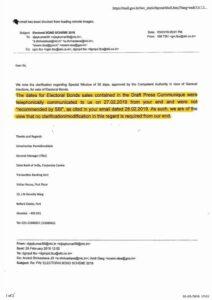 Correspondence reviewed by #KhabarLive reveals that in February 2019, the Union government insisted that the 30-day window be extended by an additional 5 days. This illegal extension was approved by the then finance minister Jaitley the same month, according to file notings within the finance ministry.

The SBI was told by the finance ministry through an email to follow the instructions, on February 28, 2019.

The finance ministry tried to put the onus for this illegal extension on the SBI. In an emailed reply to SBI on the same day, the Finance Ministry claimed the 35-day special window, instead of the 30-day period that the rules permitted, was done on the “SBI’s recommendation”.

SBI refused to take the onus for this illegality.

In an email to the finance ministry, it said, “The dates of the electoral bond sales contained in the draft Press Communique were telephonically communicated to us on 27.02.2019 from your end and were not ‘recommended by SBI’ as cited in your email dated 28.02.2019.”

However, in the same email, the bank agreed to go ahead with the 35-day electoral bond window in violation of rules as long as it was not expected to take the blame for it.

But by then, the Supreme Court was hearing petitions challenging the validity of the Electoral Bond scheme and its implementation. While hearing these, the apex court gave an interim order on April 12, 2019. Besides other instructions, the apex court told the Union government to not violate the rules and restrict the special window period for bonds in 2019 to 30 days. The finance ministry mulled changing the rules to stick to the 35-day window it had desired, but eventually backtracked towards a 30-day window.

(This is the fourth part of #MoneyPolitics, an exclusive #KhabarLive investigation into how the Modi government brought untraceable funds into Indian politics.)