The possibility of the new capital of the newly formed Andhra Pradesh state is almost becoming invisible in near future. As the Gannavaram is the gateway to Amaravati, the capital of Andhra Pradesh. Over the last few years, the Vijayawada International Airport at Gannavaram got busier after former chief minister N. Chandrababu Naidu announced his choice for the capital. More than the airport, it was the new capital, located some 30km away, that changed the lives of the people in the town and in the neighbouring villages.

After the state was bifurcated in 2014, businessman Kotagiri Prasad, from Gannavaram, was witness to an unprecedented flow of cars into the area in 2015. “There were newspaper reports that the new capital would cover Gannavaram. Overnight, land rates increased from Rs30 lakh per acre to Rs4 crore,” he said. “The speculation led to a large number of NRIs and investors from across the state and country hunting for land. It looked like every resident had turned into a realtor.” 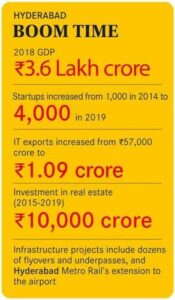 But then came the announcement that the capital would come up in a different location, and the land prices dropped to less than Rs2 crore per acre, said Prasad. “Many of the buyers who had advanced money for registration absconded,” he said. “Many lost money. Real estate boards vanished and big cars stopped coming.”

For the third time in five years, the prices in Prasad’s area have fluctuated again—the slump, this time, is owing to rumours around the status of Amaravati after Y.S. Jagan Mohan Reddy’s YSR Congress Party came to power with an overwhelming majority this year.

The idea of Amaravati, conceptualised under Naidu, was promoted on a grand scale locally and internationally. Baahubali director S.S. Rajamouli made a short video conceptualising a design for Amaravati’s legislative assembly. Globally reputed architects like Norman Foster and Hafeez Contractor were roped in. Miniature models of the proposed capital region appeared at summits and events. The hype greatly pushed the real estate prices even though the project had a delayed take-off, missing many deadlines. A reality check shows that after spending between Rs8,000 crore and Rs10,000 crore, not a single permanent structure is ready. The High Court, assembly and secretariat are still housed in temporary buildings.

While there is a slump in the real estate and construction sector across the state owing to demonetisation and shortage of sand, says R.V. Swamy, president of Confederation of Real Estate Developers Association of India (CREDAI), Vijayawada chapter, the rates fell in Amaravati because Chief Minister Jagan Mohan Reddy has not clarified about its status and the government has stopped construction, too. But, it will not upset the local real estate industry, he says. “Land prices should have been controlled in the past, but that did not happen. They were overpriced,” he says. “Now, the land prices are in a good bracket. It has to continue like this so that more number of people can buy properties. The market would have crashed had the prices not decreased. All that the new government has to do is give assurance that the capital will not be shifted and the transactions and construction activity will resume.”

In the capital city, where Naidu’s residence in Undavalli and the secretariat in Velagapudi are located, there is a ban on the sale and purchase of land. In the land-pooling scheme, close to 34,000 acres were acquired by the previous government for development, with compensation offered in different packages to farmers and landowners. Those who did not want to part with their land approached courts. 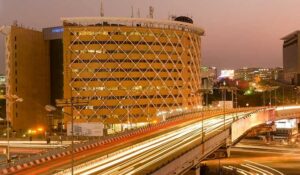 There are, however, no such restrictions past the borders of Amaravati city. In Kolanukunda village, just outside the city, new residential ventures had sprung up in the last few years. Today, Hyderabad-based Srinivas Naidu, a builder who manages Lokapriya Properties, is a worried man. He has completed constructing 90 per cent of the project, but there are hardly any buyers. He picked a location close to the highway, expecting people from across the state to come and buy property as it was part of the capital region. “I thought that new businesses would be set up and new industries would come here. I even thought that software companies would come up around my venture,” said Srinivas. “But there has literally been no development since the last few years.”

According to Srinivas and other realtors, there are close to 6,000 new flats in Vijayawada and surrounding areas, but no customers to occupy them. It is a similar situation in Tadepalli, Mangalagiri and other areas around the capital city. Luxurious villas and gated communities are at various stages of completion. The builders admit that they misjudged the inflow of non-locals and their spending power owing to the expectations raised by the previous government.

The Telugu Desam Party, however, says that its capital city plan was a self-sustaining model that should be continued by the current government. “Amaravati is a brilliant idea which found acceptance,” said former vice chairman of the state planning board, C. Kutumba Rao of the TDP. “We have seen that wherever farmers sold their land to the government, they started living in poverty after a few years. This land-pooling model was simple as lands were still in the hands of the farmers, which would be given to them after development. In future, it would be valued in crores.”

The ruling YSRCP, however, has accused the TDP of resorting to insider trading in the capital and abnormally increasing the land value. “It has been proved that TDP leaders bought land before the capital was announced,” said Mangalagiri MLA A. Ramakrishna Reddy. “In the coming days, it will be revealed who all resorted to this illegal practice. Only Naidu and his benamis benefitted from the high land prices whereas lands of the dalit and the poor were snatched away.” Reacting to the opposition’s allegation of shifting the capital, he said, “Nowhere have we said that we will shift the capital. We have only stalled work because massive corruption had taken place in every project during the TDP’s term. We are only reviewing these projects, which will, in turn, save public money.”

While Amaravati’s future seems foggy, Hyderabad is currently on a high. The sudden spur in businesses and economic activity in Telangana’s capital can be attributed to a buoyant real estate market.

In a bylane of Banjara Hills, a posh locality, Kapil Kanchibotla rents out three of the four bedrooms in his flat, thanks to AirBnB, an app that connects house owners with potential renters. He is earning a “decent profit”, he says, and plans to rent out a few more flats in the IT belt in the coming months. Many like Kanchibotla, who got the idea from a friend who rented out his flat near the Hyderabad airport on AirBnB, have ventured into this business, owing to the large inflow of visitors to the city. “A businessman from Mumbai and his wife have taken a bedroom for the entire month,” says Kanchibotla. “They are here searching for land to invest in on the outskirts of Hyderabad.”

In the last year, land prices have skyrocketed in and around Hyderabad. This has come after a lull of nearly four years. In some parts of Greater Hyderabad, the prices have doubled, even tripled, in the last one year. In the western part of Hyderabad—home to the rich and with one of the biggest IT corridors of the country—lies Mokila, once a quaint village. Today, it is a sought-after area for villas and high-end gated communities. “Each villa was around Rs1.2 crore in 2018,” said Srinath Reddy, a real estate agent. “The same villas are selling for Rs3.5 crore now. In fact, there are more number of buyers than sellers in this area. This is the biggest boom in the recent years and it was unexpected.”

Construction activity has picked up in a big way in the adjoining areas, too. Dozens of new commercial and residential ventures are coming up in Narsingi, Puppalaguda and Manikonda. Local registration offices are buzzing with activity here.

Brand Hyderabad’s gain seems to be because of the slowdown in every other metro. Chennai’s real estate market has not picked up since the 2015 floods and the unstable political environment is not helping matters either. In Mumbai, affordable housing is out of the common man’s reach. In Bengaluru, the speculation of a ban on construction activity is doing the rounds, and in Delhi, the supply has surpassed the demand, taking the market to a saturation point.

“Hyderabad has earned the tag of the most affordable city and is attracting a lot of buyers,” said C. Sekhar Reddy, former president of CREDAI. “The city boasts of a good infrastructure and connectivity. There are no issues related to drinking water supply and power. Also, new companies are coming up here.”

Sensing an opportunity to improve its revenues, the Telangana government has decided to auction 150 acres in Kokapet on the outskirts of Hyderabad. The government is planning to raise around Rs4,000 crore from this auction to be held in October. “We have sent out invitations to big real estate firms across the country to participate in the auction,” said a senior official of Hyderabad Metropolitan Development Authority. “This exercise will not only get us a good price but also enhance the image of Hyderabad. There is a lot of interest to buy these properties, which is like a real estate goldmine, as it is close to the airport and the IT zone.” This, in turn, has set off a new cycle of business pitches and cold calls. A few companies have invited people to invest in their firms early and earn good returns in case they win the auction.

Meanwhile, the IT and startup industry in Hyderabad continues to grow by leaps and bounds. In August, Amazon inaugurated its first fully owned campus outside the United States in Hyderabad. Mobile giant OnePlus opened its first research and development facility here a few weeks ago. PepsiCo, too, plans to have its biggest services hub outside the US in Hyderabad.

“We are in talks with many corporate companies,” said a senior official of the industries department of Telangana. “They are keen to not just set shop in Hyderabad, but also buy land at market price or subsidised rates to establish their permanent offices. We are waiting for confirmations before making any announcements.”

Thanks to startups, Hyderabad has also seen a rise in the number of co-working spaces and incubators. It is also the favourite city to host conventions and summits. “Though other cities like Delhi, Mumbai and Kolkata have new convention centres, most big-ticket national and international conferences are held in Hyderabad,” said Vishala Reddy, director of Identcity, a firm that offers consulting on city development, marketing and branding services. “Due to the thriving IT, pharma and biotech industries and good infrastructure, Hyderabad continues to be the most preferred choice.”

Thanks to a floating crowd with high spending power, an investor-friendly environment and access to easy mobility, Hyderabad is turning into a leisure and food destination, too. “Till last year, I observed that new restaurants would come up only in areas where the IT industry is concentrated. It is not the case anymore,” said food enthusiast and columnist Sabyasachi Ray Chaudhuri. “Along the metro rail route, a lot of restaurants have sprung up, even in old parts of Hyderabad. I can also see new and unique cuisines like Nepali, Korean and Japanese at these eateries.”

For now, Hyderabad is tasting some realty success. #KhabarLive