After the ‘Million March’ thousands of people throng again on streets of Hyderabad protesting against the contentious Citizenship Amendment Act (CAA). The Tiranga Rally, led by the All India Majlis-e-Ittehadul Muslimeen (AIMIM) president and Hyderabad MP Asaduddin Owaisi under the banner of United Muslims Action Committee. 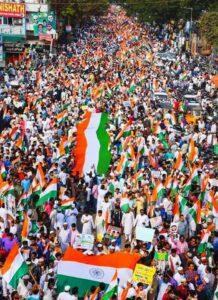 Witnessed a huge turnout with people chanting anti-CAA slogans and waving the national flag. The rally which began at Mir Alam Eidgah culminated in a public meeting at the Shastripuram grounds, where Owaisi and other leaders of the United Muslim Action Committee addressed the gathering.

People of all age groups attended the rally, including elderly men, women and even kids who walked along with the crowd who had come to offer prayers at Mir Alam Eidgah. The open ground, which witnesses prayers only twice a year on the occasion of Eid, saw a massive gathering as people carrying national flags poured in from various parts of the city.

ALSO READ:  'Corporate School' Teachers Strugglling To Do 'Anything' To 'Save The Job' In Andhra Pradesh

Addressing the gathering, various leaders of the United Muslims Action Committee, unanimously raised their voice to condemn CAA, NRC and NPR and asked the crowd to refrain from showing documents to prove their citizenship.

Chanting slogans of “Hum leke Rahenge Azaadi”, “Awaaz do hum ek hain”, crowds thronged the venue holding the tricolour in their hands. Women also formed groups and were seated in one of the front rows were Owaisi addressed the gathering. Speaking to the crowd, Owaisi said that not one person should be forced to show even their Aaadhar cards in order to prove their citizenship in this country.

“Even if the police ask you, you must refrain from having to prove yourself to be a citizen of India. Also, to the people sitting at the Centre, if you really wish to see what women empowerment, look at the women who have gathered here today to protest against the Act. This freedom to come out in the public without fear is what we call true empowerment,” the AIMIM chief said. 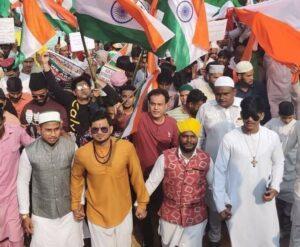 Owaisi also announced that a huge public meeting will be held at Charminar on January 25 and at midnight he will unfurl the national flag and recite the national anthem to mark the Republic Day. He also said leading poets of the country would be invited for the event aimed to save the Constitution and the country.

AIMIM is the biggest constituent of the United Muslim Action Committee, an umbrella body of various Muslim groups. It had held a massive public meeting at AIMIM headquarters Darussalam on December 22 last year to oppose CAA and National Register of Citizens (NRC).

The MP had also led a delegation of Muslim leaders to meet the Telangana Chief Minister on December 25, urging him to not to conduct National Population Register (NPR) process in the state. #KhabarLive