Recently, a video clip of Mohammad Azharuddin brought a strong sense of déjà vu with it. Clad in a T-shirt and golf shorts, a baseball cap and the collars turned up, as usual, the former Indian cricket captain was flicking some throwdowns at him – nonchalantly as ever – towards the imaginary mid-wicket. 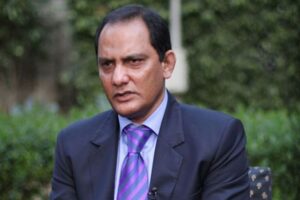 Ask him about it and ‘Ajju Bhai’ – one of the most enigmatic characters of Indian cricket is almost embarrassed at it. ‘’Yes, it’s the handiwork of my son (Asad) and daughter-in-law Anam (sister of tennis icon Sania Mirza). It’s part of my routine to visit the cricket stadium every evening for some jogging and stretching etc but on that day, they insisted that I have a hit too. Little did I know that they will put the clip on the social media,’’ said Azharuddin.

As for fit as ever at 57 years, the man with the magical wrists would have been perhaps a perfect package for the IPL franchises in the era of T20 with his uninhibited strokeplay, lightning-quick fielding, and an ability to roll his arm over for some gentle medium pacers. Asked if he would have enjoyed the shortest format, Azhar told #KhabarLive during an exclusive interview in Hyderabad, ‘’I think I would have enjoyed the format,’’ before adding in zest: ‘’Maybe, you can ask the franchise owners if they would have bid for me.’’

It was last September when Azhar, after spending years in the wilderness due to the Indian board’s ban on him on match-fixing charges, took a fresh guard in the sport as the president of the Hyderabad Cricket Association (HCA). The state body, on their part, honored him by naming a stand at the Rajiv Gandhi International Stadium – and this job occupies a lion’s share of Azhar’s time now.

‘’Yes, it’s quite a challenging job. There are 226 affiliated clubs and you have to run it with a completely neutral perspective. It’s much tougher than leading a side where you are handling 15 persons,’’ he said. 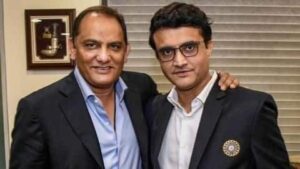 The cricket officialdom perhaps never had it so good with two former India captains in administration now – with Azhar as the head of his state body while Sourav Ganguly is now the president of Board of Control for Cricket in India (BCCI). Graeme Smith, one of the most successful captains of South Africa, is now the Director of Cricket South Africa.

Asked about the phenomenon, Azhar said, ‘’It’s a welcome trend because we have played the game and can see things from a players’ perspective. As far as my role with Hyderabad is concerned, I am channelizing all my energy to ensure that that the team comes up to a certain level as they have not done well in the last three to four seasons.’’

A staunch backer of the Indian Premier League (IPL), Azhar takes heart from Ganguly’s announcement a few days back that the BCCI is exploring all the options now to host the league – even if behind closed doors. ‘’I hope the league can eventually get a window where we get to host a minimum of seven matches. The league, whether one likes it or not, has given a lot to the sport in the last 10-12 years. 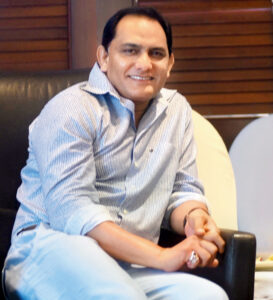 ’It’s a stage where cricketers get a lot of attention if they perform and get recognized quickly. Just think about it, a Hardik Pandya or a Jasprit Bumrah may still have been struggling in first-class cricket if the IPL was not there. I think it has been a win-win situation for the BCCI vis-à-vis the cricketers and don’t agree with a section of critics who often call it a money-grab,’’ he observed.

An owner of 6215 runs from 99 Tests and 9378 runs from 334 ODIs, Azhar was undoubtedly one of the most attractive batsmen to watch during his time – though his distinctive style would be a tough act to follow for any youngster. Has he ever thought of giving back something to the sport by taking up a coach’s role? ‘’ Yes, I am ready to give it a shot. If I get an opportunity to work with the Indian team, I would jump at it without batting an eyelid,’’ Azhar said.

However, while on the subject of coaching, the Hyderabadi feels that much is made out of the ‘support staff’ with each team these days – be at a national, state, or franchise level. ‘’I am amazed to see so many people accompanying the team these days. For example, my specialization is in batting and fielding, and hence if I coach any team, I don’t really a batting coach. Isn’t it? ,’’ he countered. 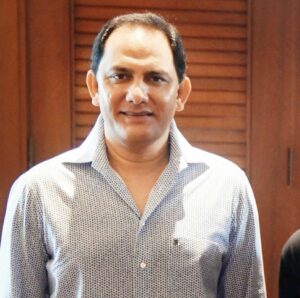 Any conversation with Azhar cannot be complete without a reference to the India-Pakistan matches in Sharjah – and surely enough – he cannot stop reminiscing about them. ‘’Oh yes, there are so many memories of them during my career. But before I talk about those matches, I must thank Abdul Rahman Bukhatir and Asif Iqbal for their idea of starting the Cricketers’ Benevolent Fund Series (CBFS). It’s not only cricketers from India and Pakistan but other countries who have benefitted from them – and it used to be serious money for those days,’’ he said.

In fact, Azhar’s journey from a prodigiously talented debutant into Indian cricket’s folklore began with that of Sharjah itself in 1985 when India managed to defend a meager total of 125 runs to win the opener of Rothmans Cup, the first-ever international tournament in the desert, against Pakistan. ‘’I remember being the highest scorer from either side with an innings of 47 runs as Imran Khan captured six wickets. Those days, we used to visit Sharjah twice a year – once in March and then again in October and were part of some classic contests,’’ he said.

Finally, which one of the India-Pakistan matches would rank as the most memorable one for him? ‘’Oh, it’s got to be the 1996 World Cup quarter-final in Bengaluru. I have never possibly played in a more intense match in my life and it was a huge relief to win the cliffhanger and make it to the semi-finals,’’ Azhar said.

It was also India’s best-ever World Cup showing under Azhar, who led the country in three of them between 1992 and 1999. The Men in Blues’ campaign ended in an anti-climax as their semi-final against Sri Lanka was abandoned at the Eden Gardens in Kolkata – with Match Referee Clive Lloyd eventually awarding the match to the Lankans.

It was a night of shame for Indian cricket at the hallowed venue – but that’s another story! #KhabarLive #hydnews