A silver screen adaptation of the popular sitcom Amrutham, the film does manage to surprise you. Amrutham Dhvitheeyam streaming on ZEE5 aired first three episodes and two episodes of lockdown special here is the review of the much awaited telugu comedy show.

Every episode is designed hilariously. In fact, it is a nostalgic moment to recall all the memories that the serial left in our hearts. Not missing the soul, Amrutham Dhvitheeyam begins with Amrutha Rao and Anji deciding to start their new venture after losing all their money. 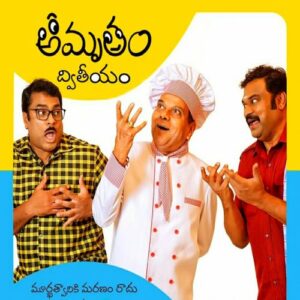 After a break of over a decade, Amrutham has made its return to the small screen once again. The crew remains same, except for Gundu Hanumantha Rao and Devdas Kanakala. LB Sriram has played the role Anjaneyulu in Amrutham Dhvitheeyam. Similarly, the recurring Character of Amrutham’s wife Sanju is played by Satya Krishna. Sandeep Gunnam, son of Gangaraju Gunnam has directed the Dhvitheeyam.

Story Review
When was the last time a popular Telugu TV show was made into a movie? We’re not sure but Amrutham Chandamamlo is definitely one of the very few films that fall into that category. A silver screen adaptation of the popular sitcom Amrutham, the film does manage to surprise you.

ALSO READ:  'Serlingampally Constituency', The 'Richest' And 'The Best' In Telangana State

The filmmaker takes the elements from the serial and turned it into a space comedy while still retaining the simple humor that the serial was famous for. Also, it’s not very often that we get a Telugu film that is targeted at the kids, yet the filmmaker does a remarkable job of not turning it into an overtly childish as such films generally end up being a little too juvenile.

Lead actors Srinivas Avasarala and Harish comfortably slip into the characters of the goofy best buddies, Amrutham and Anji popularised by Harshvardhan and Gundu Hanumantha Rao. Both Harish and Srinivas are spot on with their comic timing and compliment each other.

The filmmaker has infused the plot with some skill fully constructed episodes in outer space, while still managing to retain the innocence in the humor. The lead actors are always end up finding themselves is believable stupid situations right through the movie. It all comes together pretty well aided by a pleasant background score.

The visual effects although not exactly seamless, create a reasonably believable visual ambience in keeping with light hearted theme of the movie. After a reasonably engaging first half, things begin to a little too gimmicky in the second half as the filmmaker goes overboard with some unnecessary comic indulgences which back fire.

The story of this serial revolves around the Amrutha Vilas, a Terrace Dhaba maintained by Amrutham as a cash drawer, Anji as the Chef and Sarvam as their maid as well as hotel bearer. The Appaji, regular customer who visits their hotel daily tortures them by collecting money as a punishment.

The unsuccessful combination of Amrutham, Anjaneyulu and Sarvam gets back together to relaunch the Amrutha Vilas once again. Their bad dream, Appaji gets into the game as usual and starts his style of penalties on Amrutham batch. 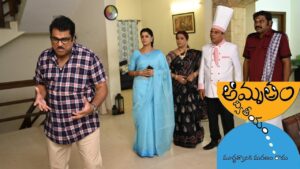 Analysis
The writer of Amrutham, Gangaraju Gunnam, as stick to the basics of the Amrutham. He hasn’t return any over the top scenes. Gangaraju has made it clear to deliver what an usual episode of Amrutham used to deliver. The good thing is, as always this has worked.

The first five episodes of Amrutham Dhvitheeyam succeds in evoking good laugh. The one liners isn’t lost in the writer, Gangaraju.