The strong smell of eucalyptus envelopes you even before you reach Karkhana Zinda Tilismath, where the iconic ‘har marz ki dawa’, or cure-all, has been made since 1920. It is a magical potion as the name suggests and Zinda Tilismath in Urdu literally means ‘living magic’, which can be consumed internally and applied externally to treat all kinds of ailments.

Zinda Tilismath, Hyderabad’s trusted Unani medicine, is also one of its biggest successes
The story of Zinda Tilismath, a liquid herbal remedy, began 100 years ago, in the hands of Hakim Mohammed Moizuddin Farooqui.

Thousands of Hyderabadis have relied on the century-old herbal Unani potion to keep cough and colds, aches and pains, indigestion, and infections at bay. Covid-19 pandemic has boosted sales in the last three months.

All her life, my grandmother followed a standard routine for two chronic problems that plagued her at periodic intervals: Consuming hot tea laced with eight drops of Zinda Tilismath to treat a cold and applying a cotton swab soaked with 12 drops of the same medicine over her gums to cure a toothache. Nothing else, according to her, was half as effective.

Like her, thousands of Hyderabadis have relied on the century-old herbal Unani potion to keep cough and colds, aches and pains, indigestion, and infections at bay. From the erstwhile aristocrats of Hyderabad to film stars and politicians, it has remained the first line of defense against ailments for many. 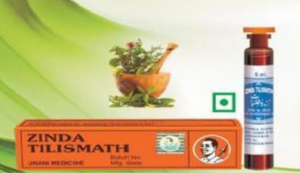 The story of Zinda Tilismath, a liquid herbal remedy, began 100 years ago, in the hands of Hakim Mohammed Moizuddin Farooqui. The physician was trained in Unani medicine, which is said to have been derived from Byzantine Greece. This all-weather miracle brew transformed its owner from just another hakim in Hyderabad to the creator of one of the city’s signature success stories.

This tiny bottle with its dark liquid has only five ingredients — eucalyptus, which is the main ingredient at 70 percent, and camphor, menthol, thymol, and ratanjyoth (bark of a tree, which lends the color to this medication).

Before this product was launched formally as Zinda Tilismath by Mohammed Hakim Moizuddin Farooqui in 1920, he was running a clinic at Moti Market (though the market exists, the clinic is no more there) in the 1880s, where he would treat people for minor ailments such as cough and cold using the Unani tradition.

The then Nizam was impressed with the word-of-mouth review of this product and allowed Hakimji to use the Nizam’s cap (dastar), in the shape of seven kulchas one atop the other, as the registered trademark when Farooqui launched the company in 1920. 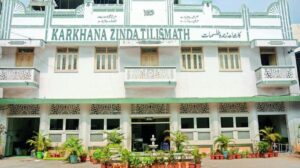 Farooqui’s grandson Imad, 52, currently a joint managing partner at the company, Karkhana Zinda Tilismath, credits his grandfather’s business acumen and marketing skills for the brand’s success. “He perfected the recipe over the course of many years by creating a diverse set of patients. Once he established the factory in 1920, he marketed it by painting its ad on the boulders on the Old Hyderabad-Mumbai highway (some of which still exist) and distributing pamphlets in crowded places such as bus and railway stations,” he tells #KhabarLive.

Many companies used this as a trademark in those days to show their loyalty to the head of the state. It was then that this magical liquid was commercially launched as Zinda Tilismath. The Nizam’s dastar still has its place on the package.

Even in those days a lot of planning went into getting a logo and the color of the packaging. The bright orange has not changed for 98 years and neither has the logo of the strong African male armed with a bow and arrow.

“There were no advertising agencies then and my grandfather did not want to use a European nor any women to publicize his product,” says Saad Farooqui, the third generation working at the factory. “Those days the Siddis were the epitome of health and acting as personal bodyguards both for the Nizam and his family members. They were the symbol of trust, protection and good health,” says Saad.

ALSO READ:  Wandering The lanes Of Upperpally In Hyderabad

In the marketing blitzkrieg woven around Zinda Tilismath — which means ‘living magic’— the use of strategic imagery helped immensely. The adoption of the Nizam of Hyderabad’s cap (dastar) as the registered trademark struck a chord with Hyderabadis and the logo of an African warrior armed with a spear signified vitality and strength.

A cavalry of African soldiers (mostly from Ethiopia), known as Siddhis, was the pride of the Nizam’s army and even deployed as his personal bodyguards. By aligning itself with the Siddhis, the potion propagated the lore of guaranteed good health and reliability. The fact that Farooqui himself traveled with a muscular Abyssinian guard-cum-assistant augured well for the optics around the brand. 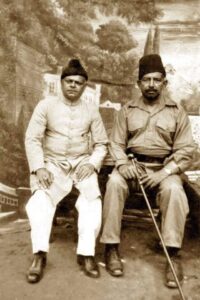 What further worked in its favor were two factors: Affordability and functionality. The price — up from 60 paise in 1973 for a 10ml pack to ₹85 now — is still within the reach of the common man, thus ensuring steady sales. That it allows for both internal and external use has only helped the medicine’s popularity. Imad points out that it is even administered to newborn babies and pregnant women. Such is the brand’s soft power that the locality that houses its factory has been named Zinda Tilismath Nagar.

These Siddhis were of Ethiopian East African origin and part of the Wanaparthy army who later joined the Nizam’s forces. So it was that the epitome of health and trust came to stay as the logo for this orange box.

Hakim Saab was born in Gulbarga, but his family was from Aurangabad which was then part of the Hyderabad state.

There are those who will swear by this medicine, from a youngster to a senior citizen for this liquid is a quick fix for issues like cold, cough, headache, stomach pain, and many others.

It has now been confirmed by a laboratory at Pune that Zinda Tilismath is effective as a preventive for swine flu. “It has a symptomatic cure and acts as a preventive,” says Saad. The company sent hampers to Uttarakhand and Kashmir when they had floods, while every batch of Haj pilgrims also gets a free hamper.

The potion has been using five ingredients since inception — eucalyptus, camphor, menthol, thymol, and alkanet root (also called ratanjyoth, it lends a dark brown color to the medicine).

While the company filled up bottles manually till 1995, it eventually automated the process with imported machines. It now has its own unit to manufacture bottles. Over the years, the bottles have changed from glass flip-tops to plastic in the form of an eyedropper. Every change has been strictly monitored by its loyal clientèle. 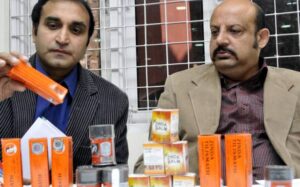 Imad recalls with a laugh that when they created a mold for plastic bottles a couple of years ago, people started complaining that the quantity had reduced. “We realized that it was due to space between the top of the liquid and the bottom of the cap, which was now visible in the new shape of the bottle. We had to redesign the bottle to address this,” Imad says.

“The reason for our survival is the strong belief that many people have in this tiny bottle. In fact, I used it when my daughter had a congested chest. As our domestic help said, ‘jadoo ke jaisa chale gaya’,” he says.

This liquid medicine is unusual in that it can be used externally and taken internally, by adding a few drops (depending on the ailment), to a cup of milk or other drinks There are huge boards in the compound of the factory, which explain the uses of each ingredient which goes into the making of Zinda Tilismath, with a board showing the dosage that should be taken and in what manner.

“We bring school students to show around the factory and display the benefits of herbal medicine,” says Saad adding that pharmacy students come to conduct their studies at the factory.

There was not too much of advertising those days and Hakim Saab was his own marketing person. He would travel into the rural parts of Hyderabad state by train and carry a board with him made of cast iron which announced the products he was carrying. These boards have become collector’s items and have been bought by people living in the US through e-Bay.

Farooky toothpowder is synonymous with Zinda Tilismath and those who swear by one swear by the other. This toothpowder has 16 ingredients, including the five of Zinda Tilismath. It also has black cardamom, cinnamon, black salt, and several products which are exhibited for the people to see.

Hyderabad-based historian Sajjad Shahid points out that a bottle can be found in every Hyderabadi home, “It initially gained popularity as a cure for influenza and cholera, but people found it effective for numerous other ailments. I use it for sore throat/cough by applying a few drops in a sada paan.”

YS Rajasekhara Reddy, former Andhra Pradesh chief minister, touted it as a cure for swine flu when it ravaged the city in 2005. Imad says that the Covid-19 pandemic has boosted sales in the last three months. “Several symptoms of common cold and flu and Covid-19 are similar, so many people have Zinda Tilismath in their home remedy kits.” 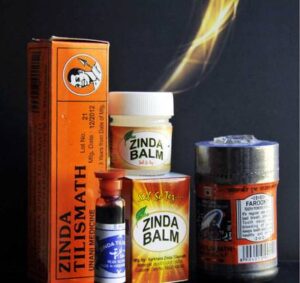 With the younger generation getting into the business, there is a little diversification. The company has entered the throat lozenges market with Zint, as the product is called.
This year they launched delicious little mouth fresheners called Zint Kala Khatta Churan and Zint Mango Churan. Though it is called churan, it is in tablet form.

Apparently Zinda Tilismath has toothpaste in the pipeline. According to Saad, it would have the combination of the same 16 products used in the toothpowder. Zinda Tilismath also has a pain balm.

Hakim Saab was a great believer in Unani medicine and wanted that the locals work at the factory. While Zinda Tilismath was mostly made manually, these days there are machines to fill the bottles and label them. The toothpowder is stilled filled manually. The company has 69 employees and of these many have been with the factory for a long time.

With a turnover of over ₹30 crore and sales of over 10 million bottles in the last financial year, Zinda Tilismath is the crown jewel of the business, which also produces balm, toothpowder, and lozenges for a sore throat. The company is now focussed on expanding its business to West Asia and the US, which have a large Indian diaspora. It is also in the process of tying up with major e-tailers to increase sales outside Hyderabad.

Mohammed Hakim Moizuddin had 12 children and all of them were managing partners of the firm as per the Muslim personal law. Now the third generation of the family is taking the company towards newer products while keeping traditions alive.

While none of the ingredients have changed, the prices have increased three-fold. With herbal products coming back into fashion, it is a bit of a challenge for this ancient but small company. With a loyal customer base in the rural hinterland, the company has been sensitive about the pricing and has not increased it by much keeping in mind its captive market. The magic looks poised for another century. #KhabarLive #hydnews

How To Start Your Own LED Lighting Company In India?