Khada Dupatta, also known as Upright Stole, is a traditional wedding dress worn by the Muslim brides of Hyderabad and Hyderabadi Khada Dupatta is a matter of pride for Hyderabadi Muslim Brides since the reign of Nizams. 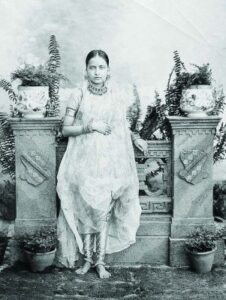 This elaborate, royal looking wedding outfit is paired with a kurta (tunic), churidar (extra-long slim pants that gather at the ankles), and of course the matching dupatta (veil) which is 6 yards long.

A traditional wedding dress of the Hyderabadi Muslim brides, the Khada Dupatta comprises of a kurta, a brocade chudidaar, and a six-yard dupatta. What’s unique about the Khada Dupatta is the dupatta itself – its draping style, particularly. It’s a unique draping style that was fashioned and perfected to style Nur Jahan, the Mughal empress. Soon, this style of draping became very famous and moved to Hyderabad during the period when Mir Qamar-ud-din Khan Siddiqi Bayafandi established the estate of Hyderabad.

The begums of the Nizams had their Khada Dupattas hand-crafted with real gold and silver threads, known as sancha. This traditional attire has continued beyond the Nizam rule and has blended with grace in modern times as well. In fact, in any traditional Muslim wedding, it is almost unimaginable for the bride to not dress up in Khada Dupatta! 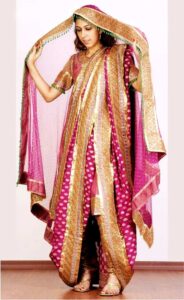 History of Hyderabadi Khada Dupatta
In the early 17th century, Mughal Empress Noor Jehan invited Turkish and Persian craftsmen to craft a royal dress, particularly only for family members of Mughal royal ladies. But later, when Nizam-ul-Mulk, Mughal governor declared his self-government over Deccan Suba (Hyderabad.), the begums of Nizam’s family adopted the Mughal’s style and creatively modified it to form the Khada Dupatta, which would be woven on silk cloth with pure gold and silver threads, popularly known as Zardozi embroidery.

When Nur Jahan became the empress, she invited Persian and Turkish craftsmen to India to craft noble’s dresses. This became famous among the Mughal women of the royal family. As years passed, the art of dupatta-crafting remained specific only to the Mughal descendants.

Years later, when Nizam-ul-Mulk, the Mughal governor declared his autonomy over Hyderabad Deccan, the women of Royal Nizam family altered the creative style of the Mughals to form a traditional Khada Dupatta. Centuries later, the Khada Dupatta continues to be a major part of weddings, celebrations, and festivities. The Chowmahalla Palace houses and exhibits the explicit royal dresses of the Nizams begums, which majorly comprises of Khada Dupattas.

The dupatta of a traditional Hyderabadi Khada Dupatta is made of net, tissue, or chiffon and is embroidered with zardozi work. The border of the dupatta is the show stopper; it is called masala. The chudidaar is of Banarasi brocade and is generally colour-coordinated with the kurta. 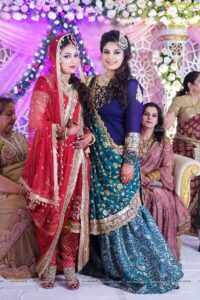 Get that perfect drape!
To begin with, locate the centre point of the dupatta, and tuck it in the back of the chudidaar, underneath the kurta. Now, bring both the ends of the dupatta in the front, creating big loops of it around the sides.

First, pick the left side end and pleat it. Make sure to keep the heavy, ornate border on top. This will now go over the left shoulder, with the other side on top of it. Next, find an appropriate point for the pleated left side, and pin it to the left shoulder so that it stays in place.

Draping style of Hyderabadi Khada Dupatta
The draping of dupatta is done by tucking the top part of the middle of dupatta into the back of churidar. Then, it is folded into pleats like an accordion at both the ends.
Draping style of the Hyderabadi Khada Dupatta is completely unique. Watch the video above to learn its draping style. Celebrity like, Sania Mirza, too wore this traditional wedding outfit on her wedding.

Hyderabadi Khada Dupatta
As you know, any bride is incomplete without jewelry. So down below is the complete list of the jewelry that is usually accompanied by the ensemble:

Adjust the loop on the side, covering the height, still falling near the waist, on the back. Correct the width of the dupatta, so that it rests neatly under the heavy, ornate border. Securely pin it in place. Now, repeat the same for the right side segment as well. The only difference is, bring it over to the left shoulder from the front, diagonally covering the chest, with the border on top. 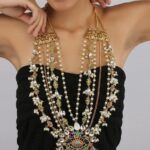 This will also have a long tail behind the back and will be used to drape the dupatta over the head. Adjust the width of this segment – tuck everything under the border, and then safely secure it with pins. The free ends of the dupatta are draped from under the right shoulder, and over the inside of the right elbow.

The regal touch: Just like any other attire, the Hyderabadi khada dupatta is also incomplete without traditional jewellery. Some of the best-suited ornaments are maang tikka, paasa, nath, karan phool, chintaak, satlada, ranihaar, jugni, gote bangles, and payal. 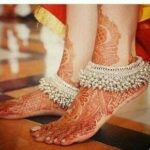 Weddings are all about experiments with your looks and attires, so try this look and share your experience with us. #KhabarLive #hydnews