Neera is a popular drink in several parts of Telangana, generally seen as a natural energy drink for weary travelers and sold by the roadside, but the state government has been actively promoting it and is hoping to commercialize the drink by setting up stalls in Hyderabad. So what exactly is neera and what explains the active push of the Telangana government to promote it? 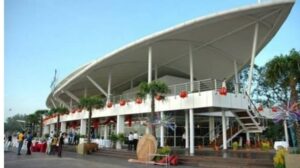 It has been three weeks since Telangana Minister KT Rama Rao and several others laid the foundation stone for the establishment of a ‘Neera’ cafe at Necklace road in Hyderabad. At the inaugural event, which was attended by several senior officials of the ruling Telangana Rashtra Samithi (TRS) government, KTR extolled the health benefits of neera and hoped that once people start drinking this, it would soon become widely popular in the city.

Neera is a sweet natural extract from Palmyra or Indian date palm trees. The extract is collected in an earthen pot, which is tied to the tree before sunrise. The liquid that is collected is neera, which is non-alcoholic. After fermentation, the same extract becomes toddy, which has alcohol content. This is the major difference between toddy and the neera, says Satyam Goud from Telangana Palm Neera and Palm Products Research Foundation (TPNPPRF). 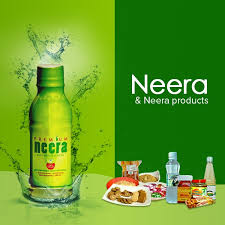 Neera has to be consumed within three hours of its extraction in its natural state for it to be fresh. However, if needed, the same has to be stored in a refrigerator or an icebox for transportation, which increases its life span to four or five days.

Though neera has a shorter life span, there are several other byproducts that are made out of it, like palm jaggery which is used as an alternative for sugar or honey. Palm jaggery is also used in making sweets. These byproducts are available in some organic stores in Hyderabad. 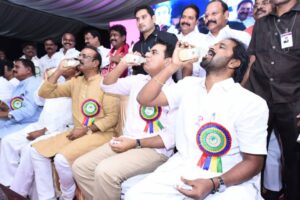 The Telangana government is endorsing neera by pointing to its nutritional value, as it is said to contain magnesium, calcium, iron, phosphorus, potassium, protein, sugar, and vitamin C.

The natural energy drink which is similar to coconut water, has the ability to improve the internal cleansing mechanism of the body, thereby helping in fending off issues like diabetes, fatty liver and heart issues, according to the TPNPPRF.

In Telangana, districts such as Nalgonda, Suryapet, Warangal, Jagtial, Janagoan, Yadagiri Bhuvangiri and others have abundant palm trees in their surroundings. And several toddy tappers in these areas are actively involved in the sale of neera and toddy but without much profit. By setting up stalls in Hyderabad, the state government hopes to popularise the drink and also help these toddy tappers in the process. 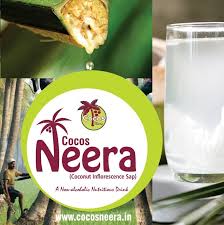 This, according to observers, will help Chief Minister K Chandrasekhar Rao politically.
“KCR is good at appropriating symbols and sentiments associated with Telangana, to his advantage. In the case of neera, several people in the state have an emotional connection with the drink, and they consume it when they go home to their villages. The drink also has the potential to turn into a major enterprise in the future,” says political analyst Palwai Raghavender Reddy.

“Selling neera has been a long-pending demand in Telangana. After toddy was discouraged, several toddy tappers in the state have lost their livelihood and at least with neera, they might gain some work in the future. There is nothing wrong even if the Telangana government is using it for political gain, as neera is not a bad thing to promote,” senior journalist and analyst K Nageshwar said.

ALSO READ:  Now, UP Govt Plans To Package And Sell 'Cow Urine' As A ‘Health Drink’

The foundation stone laid for a government-run neera cafe in Hyderabad is expected to contain ten neera stalls. The cafe is also going to serve other foods that are traditional to Telangana and can accommodate at least 250 people once opened, said Telangana Tourism minister Srinivas Goud. 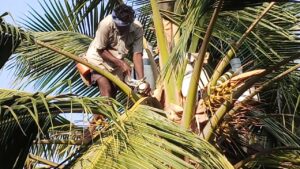 However, members of the Goud community point out that there have been no clear guidelines on how the license would be given and other details required for the establishment of the stalls.

“There are about 3 lakh active toddy tappers in the Telangana state and neera cafes would definitely improve their livelihood. But we are waiting for more details on how this would be worked out, how the purchase would be made, what price it would be sold at, and how licenses would be given among other things,” said Palle Laxman Rao Goud, state president, Telangana Goud Sangham. #KhabarLive #hydnews