Why are mediclaim reimbursements so unpredictable in Covid cases?

When 61-year-old Latha was admitted in Chennai’s Sooriya Hospital for COVID-19 treatment in July, her family didn’t expect the cost could take away all their savings. She was there for a month, and the hospital raised a bill for Rs 14 lakh. Latha, who had health insurance from Star Health and Allied Insurance Company Limited, asked the company to reimburse the bill. The company didn’t refuse to pay, but asked the hospital to rationalise the treatment cost. Agreeing to pay only Rs 4.4 lakh, Star Health wrote to the hospital, “As per the government order that has been reinforced by the Tamil Nadu ­government, such exorbitant billing shall be taken to the notice of the government.” The hospital agreed to settle for Rs 4.49 lakh.

General Insurance Council, a body representing health insurance companies, has filed some such bills in the Supreme Court to dispel the notion that they are refusing to settle claims. If lack of transparency in hospital ­billing is allowed to continue, the council said, “insurance companies would be constrained to increase premium, which would make health insurance policies unaffordable for the common man, leading to a further reduction in the penetration of health insurance that is still at a lower level in India.” The council’s submission was in ­response to Supreme Court advocate Sachin Jain’s PIL, demanding “cost-­related regulations for the treatment of COVID-19 at private hospitals”. After this petition was filed in April, the Centre and state governments put caps on treatment cost, but patients continue to suffer as insurance companies and hospitals are in a deadlock. The matter is still pending before the court.

In the past eight months since the pandemic hit the country, hospitals, patients and health insurance companies have been at the loggerheads over cashless treatment for one reason or the other. Many patients who paid from their own pocket after being ­denied cashless facilities by insurance companies are fighting to get their bills reimbursed. 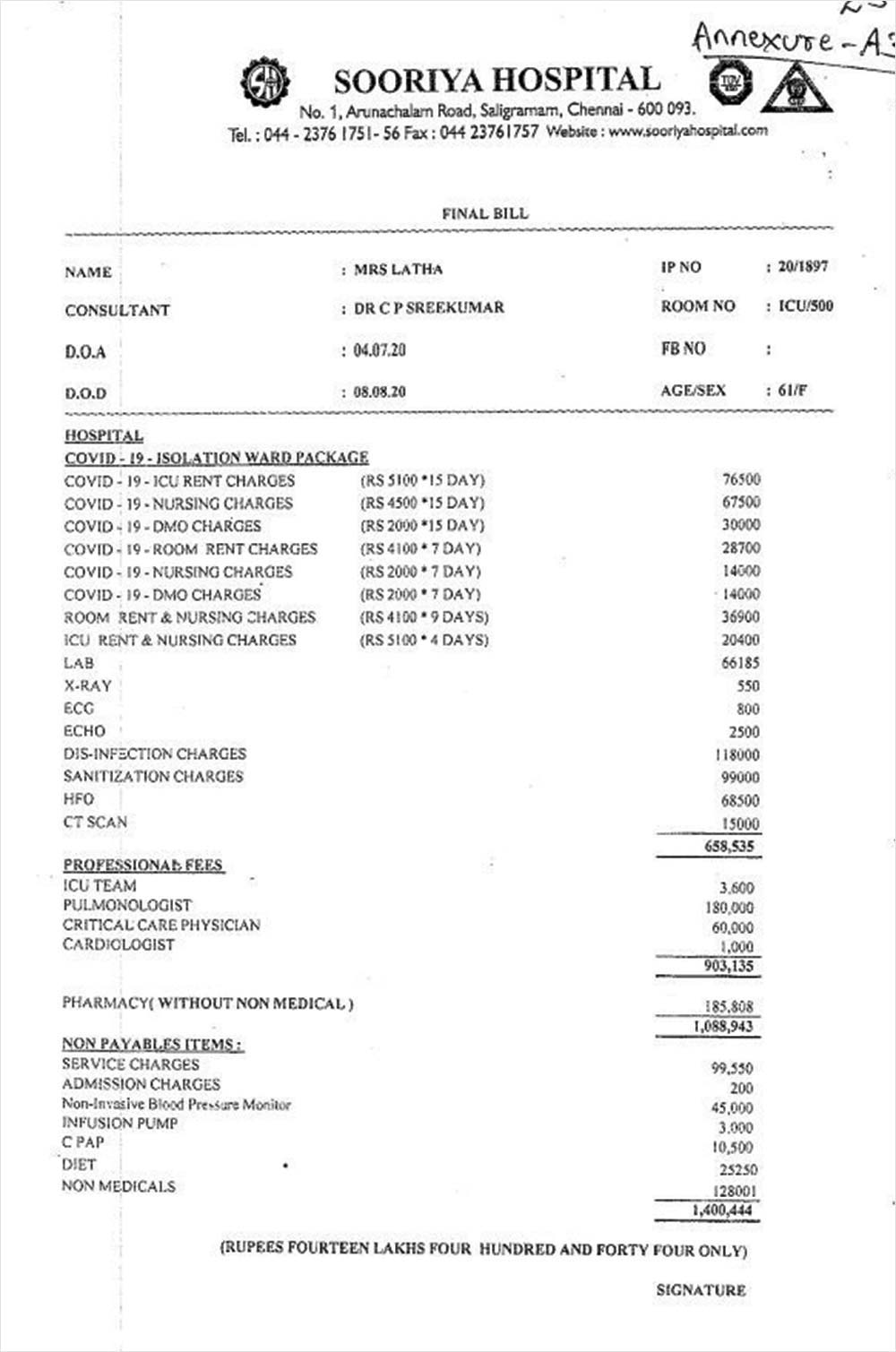 The exorbitant cost charged by ­hospitals has been a major reason for the disputes. Initially, many insurance companies dragged their feet on ­covering treatment cost for Covid, arg­uing that a pandemic was never part of their health package. This prompted the Insurance Regulatory Authority of India (IRDAI) to issue “guidelines for handing of claims reported under coronavirus” on March 4. It clarified that if an insurance company covered hospitalisation in its package, it “shall ensure that the cases related to coronavirus disease (COVID-19) shall be expeditiously handled”.

ALSO READ:  Why All The 'Farmers' In Krishna District Of Andhra Pradesh 'Keeping Away' From Active Elections?

Post-clarification, it looked like having a mediclaim was the best answer to the pandemic. However, as hospitals kept the treatment cost high, insurance companies continued to cut corners. Private hospitals said Covid led to a huge increase in the cost of treatment due to factors peculiar to this highly virulent disease. They claimed, for instance, that 20-30 per cent of the staff was not available ­because they were either in quarantine (mandatory for seven days after seven days of work), or in 17-day isolation as per the government’s protocol, after being infected. 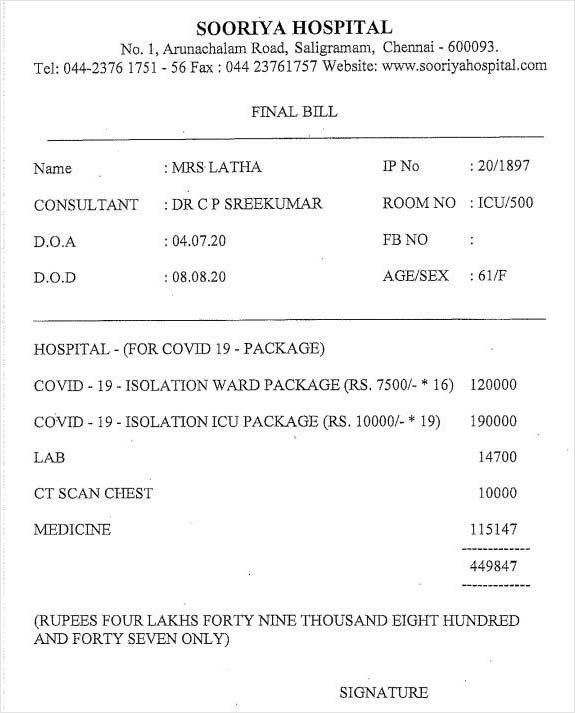 Almost all insurance companies don’t cover the cost of consumable items in their health policies. “Consumables are usually, but not restricted to, ­medical aid/equipment that have to be ­discarded after use. The cost incurred from the consumables is directly billed to the patient (if not covered in the health insurance policy),” states TATA AIG on its website. It further says that in 2016, the IRDAI ­reviewed a list of 199 items (originally listed in 2012) that are ‘non-­payable’ from the insurer’s perspective. “The list, however, just serves as a guideline and the insurers have the freedom of including or excluding any or all items from this list when it comes to policy ­coverage,” it adds.

In the pre-Covid era, consumable components used to be very small in treatment, so policy buyers never bothered to find out its finer details. But Covid requires the use of PPE kits, face mask, sanitisers etc during ­treatment. Many hospitals diverted a substantial part of treatment under the consumable head. For instance, PPE kits and face masks worn by ­doctors and nurses during treatment, sanitisers and personal care products for patients, disinfectants and housekeeping items—all become a substantial part of the overall treatment cost. As Covid patients are not allowed ­family attendants, hospitals are free to claim whatever they wanted in the name of consumables.

The caps on treatment cost following Jain’s PIL and measures such as fixing the number of PPE kits in 24 hours for one patient came as a respite. For ­instance, in Delhi, the cost for ­hospitals (accredited with the National Accreditation Board for Hospitals & Healthcare Providers) was capped at Rs 10,000-18,000 per patient depending on severity of infection. In the ­absence of any dispute redressal ­mechanism, however, many hospitals continue to overcharge.

ALSO READ:  In Swachch Bharat, Mothers, Babies Are In Peril: About 400 Hospitals In Six States Still Struggle With Hygiene, Toilets And Adequate Medicines

Hospitals and mediclaim companies have also engaged in a dispute of ­different sort with patients at the ­receiving end. Hospitals say capped treatment cost is applicable only when the patient pays and gets it reimbursed from the insurance company later. In case of cashless treatment, in which insurance companies pay on behalf of patients, hospitals insist upon standard charges. “We have a pre-existing agreement with insurance companies under which we have defined room tariff and various other charges. So we demand the agreement should come into play in case of cashless treatment,” argues a CEO of a reputed ­hospital. “Another reason is that ­insurance companies pay after two months. So, we can’t give government rates to them.” 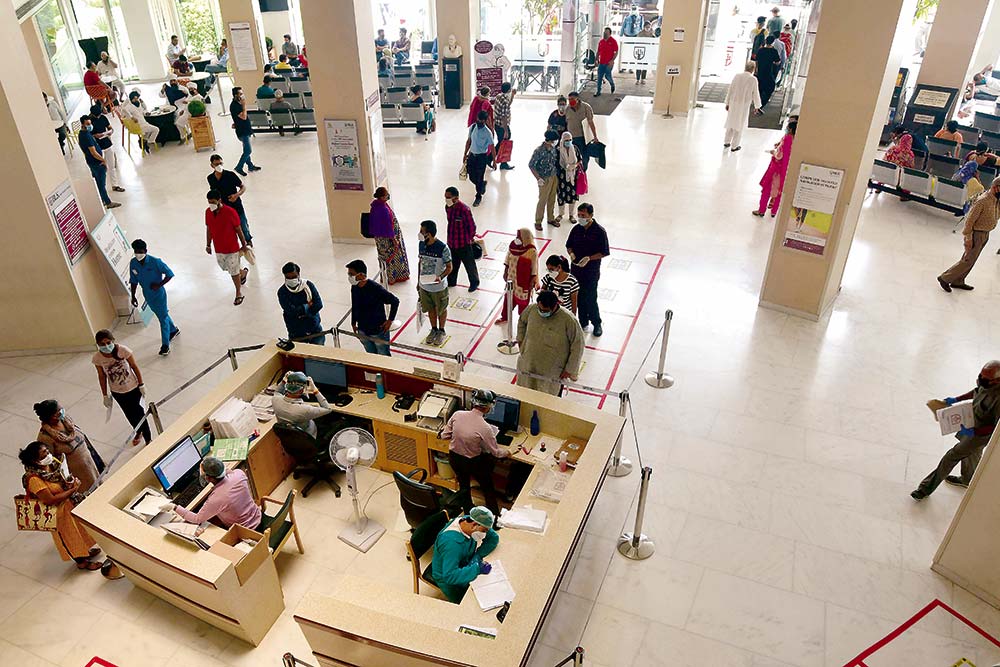 Patients who have paid from their own pocket complain that insurers avoid ­making the full settlement.

Hospitals say some ­insurance companies pay the rates as per their ­contracts, but some don’t—and this has ­become a bone of contention. Health insurance companies ask policyholders to pay the hospital first and then claim reimbursement as it is cheaper than cashless treatment.  However, ­patients who have paid from their own pocket complain that insurance companies avoid making the full settlement. For instance, a 61-year-old patient was billed Rs 3.73 lakh for 10 days of Covid treatment in Delhi’s Moolchand Hospital, but his insurer HDFC Ergo allegedly ­reimbursed only Rs 1.24 lakh. The ­insurance company held that it would pay according to the treatment rate capped by the Delhi government. “Protecting the interest of our customers is of prime importance to us and we continue to ensure that no customer is impacted,” says an HDFC Ergo spokesperson said. “We honour all policyholders’ claim as per the Covid treatment protocols issued by ICMR and cost benchmark issued by the respective state governments,”

Jain finds fault with the government for not having a regulatory mechanism to redress the dispute. “This is the crux of the problem. State governments have regulated the price, but what is the ­redressal-mechanism? If a hospital charges in violation of the capped-rate, where will I go to complain and how soon will my complaint be addressed? That’s what I am going to tell the court in the next hearing so a robust mechanism can be developed,” says Jain.

There have been many such cases in which patients applied for reimbursement, but insurance companies ­refused it on one pretext or the other. In some cases, reimbursement was ­denied on the ground all ailments had not been disclosed at the time of ­buying the policy. “We have seen that in some cases people hide pre-existing diseases at the time of buying the ­policy,” says Dr Aafreen Soudagar, CEO, Kalsekar Hospital. “A few of them contracted Covid and disclosed their health history to the hospital during admission. When these ­documents were submitted to the ­insurance company for claim settlement post-treatment, it was denied on the ground that the patient didn’t ­disclose health history.”

Arjun Deshpande, founder-CEO of Generic Aadhaar, a company that provides medicines at affordable cost, says insurers cannot just wash their hands off the situation caused by the ­pandemic, especially when people are facing hardships to survive. “As per government guidelines, the insurance company should immediately respond if Covid patients or their family ­approach it for reimbursement. If ­insurers are failing to meet expectations as money circulation has slowed down in the global economy, then they should reach out to the government for financial assistance, instead of letting the policyholders suffer,” he adds.

According to insurance expert Manish Jain, many hospitals have closed cashless services due to limited staff and patients are forced to pay for their treatment. “In such circumstances, they are at the mercy of ­insurance companies for claim reimbursement. Despite price capping, hospitals continue to charge a high fee and ­concentrate more on the consumable part so ­patients end up paying for a major chunk of treatment from their own pocket. In the absence of prompt action from the regulator, the only option people are left with is to buy a policy that covers consumables without any limitations,” he says.

Many patients and legal experts feel that IRDAI is not engaging with ­policyholders and seeking inputs from them while developing rules and regulations for insurance companies. They demand that the regulator should come up with a mechanism to take feedback from a number of policyholders to address changes that are urgently required. “This will not only give confidence to the policyholders for buying new policies, but also ­increase the insurance business and bring down the insurance cost,” says consumer rights activist Bejon Kumar Mishra. “When IRDAI was formed in 1999, it was engaging with policyholders like us and there used to be ­regular consultations on policies and regulations. This has been totally missing for the last 10 years.”

‍‍‍‍‍Why Govt Rigid And Neglected On ‘Education System’ In Telangana?

‍Why Delay In Providing Govt Help To The Family Since 2020 To This ‘Matryed Soldier’ Of Telangana?