After the devastating floods in Hyderabad due to torrential rains in Telangana, the relief scenario is getting nurky affair. Lots of kind hearted people coming forward to provide relief but some people are creating chaotic conditions at the flood affected areas.

People getting scare to get the relief from outsiders as many suffered huge mental agony during this process. Result: many are keeping distance with relief materials and aid. Hence, very few takers were seen. 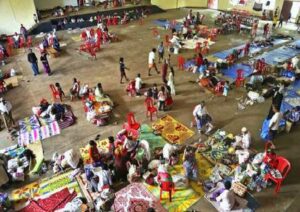 At Hafiz Baba Nagar of Hyderabad, the Umar hotel junction is ground zero for volunteer groups and private individuals to distribute relief material among those impacted by the flooding due to a section of the bund on the Gurram cheruvu lake breaking on October 18 morning. Food parcels, water bottles, clothes, as well as diapers and milk powder for babies all arrive in auto rickshaws.

While the community has forward to help after the calamity, the Telangana government appears to be missing in action on the streets. There is not even a medical camp in the locality where a serious threat of waterborne disease looms large in addition to the ongoing COVID-19 pandemic.

“There are no government-run relief camps in this area,” says Akbar, a resident of Hafiz Baba Nagar, who is coordinating with aid workers along with his friend. It has been two days since the bund broke and the area flooded, but not even a medical camp has been set up here. The local corporator is engaged in cleaning efforts but where is the TRS government?” he questions, directing a volunteer group into the flood-affected streets where more survivors need aid.

In the aftermath of the floods, the district administration announced about 60 relief camps. However, after several days of going to the affected area, this reporter observed that not only are survivors unaware of government camps but most of the relief work is being carried out by nonprofits and volunteers. Even the latter have had few takers as people have been preferring to go to homes of their relatives instead, volunteers say.

Khaja Mustafa, a resident of Nadeem colony, Tolichowki, oversaw five relief centres that operated out of function halls and local mosques. “People do not prefer to stay at the camps over their relatives’ places. Even when the people were there at the camps, no one from the district administration visited.” He alleges, “They carried out COVID-19 testing at relief camps in Shaheen Nagar but ignored other areas. They should have carried out testing in our locality too – it was the first to submerge.”

At Hafiz Baba Nagar, the distribution of relief aid is chaotic. Some people even resorted to hoarding relief material, and a local youth had to intervene to maintain order. Physical distancing norms and masks don’t appear to be a priority at the moment.

ALSO READ:  ‍Nizam-Era 'Mekala Burj' In Old City On The Brink Of Collapse In Hyderabad

On October 18, the Telangana Director of Public Health Dr G Srinivas Rao had told the media that 90 cases of COVID-19 were detected at relief camps within GHMC limits, out of the 3,406 tests done among symptomatic individuals. However, locals and volunteers at Tolichowki, Faluknuma, Chandrayangutta, and other parts of the old city affected by the flooding told TNM neither were they aware of any government-run camps, nor did they corroborate any COVID-19 tests having been done at their relief camps.

“I wish the government coordinated with us,” said Mohammad Rashaduddin, city president for Jamaat-e-Islami Hind, a socio-religious group engaged in relief work across the old city. “We are presently in the process of undertaking a survey to identify the extent of the damage that has taken place at Hafiz Baba Nagar. We can share the survey results with the government and they can release aid quicker. But we think they will not accept our survey results. While working on the ground, we tried to reach out to the GHMC zonal commissioners, but their offices didn’t respond.” The organisation is operating flood relief camps at eight centres, but most are empty.

Iqbal Razvi, one of the volunteers who helped with flood relief in several parts of the city over the past week, says that non-profits are providing the locals with soap, shampoos, blankets and bedsheets so they can manage on their own at their own homes instead of being at camps. “People are trying to get their homes cleaned up. Their immediate need is financial assistance.” 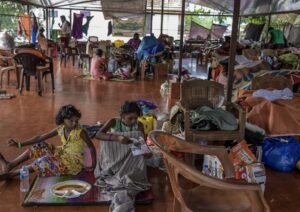 As part of relief efforts, the Telangana Chief Minister K Chandrashekar Rao on October 19 announced Rs 550 crore immediate relief package for the flood-affected, and a sum of Rs 10,000 for each family.

Akbar, whose house also got flooded, says, “No one has even come to survey the extent of the damage yet. At this rate, it will take weeks for the relief package to reach those affected. The people here need help now. Only on the day the bund broke, some leaders came to check. After that, nothing,” adds Akbar.

Officials with the revenue department and in-charge of Chandrayangutta zone were unresponsive to #KhabarLive calls and text messages. An GHMC official from one of the flood-affected zones says they had set up three relief camps for the first two days of the flood, but the people never stayed. “The people left saying they have no clothes and left for their relative’s homes,” said a senior officer. “On the first day of the floods, we housed 200 people but most people left the next day. The centres are ready from our side. We had arranged for three meals too, but people don’t want to stay.” When asked why, the officer simply says, “It was crowded.” #KhabarLive #hydnews