Winning big, losing big: That was the essence of cockfights held across the coastal districts of Andhra Pradesh on Wednesday, the first day of the three-day Sankranti festival.

Money running into nearly Rs.800-1,000 crore is being pumped into cockfights which went on with no holds barred on the first day despite the Supreme Court order on maintenance of status quo. As the apex court order is being interpreted in either way, police too played safe, allowing the blood sport. 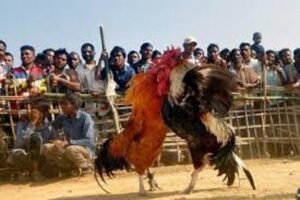 With wads of cash, gamblers from the nearby districts of Krishna, Guntur and others trickle into the towns of Ai Bhimavaram, Rampa, Seesali, Narayanapuram on the day of Bhogi. These gamblers will stay in lodgings for three days spending their money by gambling on cockfights, cards and dice games, which take place rampantly with hardly any intervention by the authorities.
Cockfighting was banned in the state in 2014 under the Prevention of Cruelty to Animals Act, 1960 and the AP Gaming Act 1974. The ban was upheld again in 2018. Regardless of its legalities, cockfighting continues unabatedly in East and West Godavari districts of Andhra Pradesh. Just scratching the surface reveals how these high-stake cockfights are held with the patronage of political leaders and support of the local police.

In Vijayawada, women gathered at Gayatri Nagar and took part in the revelry as the cocks fought. It is the first time that cockfighting took place in the city in known times. Vijayawada MP Kesineni Srinivas (Nani) and MLAs Bonda Umamaheswara Rao and Gadde Ramamohan Rao and ZP chairperson Gadde Anuradha turned up at the venue.

The organisers claimed that no betting was involved and that the cocks had no razors tied to their legs.

At Vuyyur, close to the main road, tents were pitched and cockfights were organised without a care in the world. There was huge rush to watch the contests so much so that the organisers had to deploy private security guards to clear traffic.

At Gannavaram, there was a minor clash between two groups over organising cockfights. In a fit of rage, one group set fire to a car belonging to a member of the other group, which led to tension.

Under pressure from politicos, policemen looked the other way as cockfights are organised at several places in the coastal districts. As the Supreme Court order is being interpreted both ways, police did not act. They confined themselves to videotaping the contests so that if necessary they could take action at a later date.

At Bhimavaram in West Godavari district is one of the prominent places in Andhra Pradesh where cockfights take place in a large-scale in open grounds, with high-stakes during the three-day Sankranti festival. A betting of Rs 10 lakh is gambled on each round of fight in each of the 200 designated fighting rings. A ban on this illegal activity is no deterrent.
Along the sidelines of these cockfight pits, other forms of gambling too have flourished, making the entire affair even more lucrative to the organisers. It is estimated that at least Rs 1000 crore change hands every year  during the festival, as the venue also allows card and dice games.
The bloodsport which now has earned a social acceptance as a “tradition” during the festival, was earlier restricted to the Kshatriya communities, who find a presence in West and East Godavari districts. As the land-owning Kshatriya (Raju) communities are rich, the cockfights organized by them involve crores of rupees. 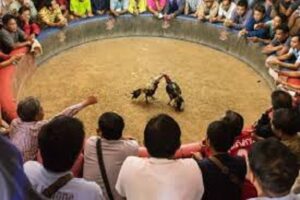 In this sport, the roosters are tied with razor-sharp blades on their legs that often results in the death of the bird. If the bird loses in the competition, the opponent takes the betting amount and the bird as his possession.
“There are two tier of cockfights, low-stake and high-stake ones. The low-stake ones are held secretly inside coconut farms without the knowledge of police. These are held by villagers without any political influence, whereas the high-stake ones are held by followers of politicians in open grounds,” says Gali Nagaraja, a journalist based in Andhra Pradesh.
Each round of cockfight in a high-stake venue is Rs 10 lakh, where the prized roosters which are prepared for the battle a month ahead with training that helps them increase their resistance. Farmers who own these roosters prepare them for the gruesome battle. The roosters are put on a high-protein diet, and are fed cashews, minced meat and millets. They also make them swim in water to improve their strength.. “There are farmers who breed these roosters specifically for the cockfights. Even if they don’t directly participate in the competitions, they breed them to sell to the rich farmers interested in cockfights,” says Ravi, another journalist from West Godavari.
According to Ravi, these roosters are priced depending on their breed, weight and height. “Some roosters fetch as much as a lakh and more depending on its breed and previous performance,” adds Ravi.
For these high-stake games, the chief guests are ruling party MPs and MLAs. To organize these cockfights, the organizers incur an expenditure of Rs 5 lakh, that involves bribing the police, arranging bouncers, erecting tents, and other facilities in the venues.
Often it is the ruling party members who conduct these events brazenly, as they can manage the police. “It has become a prestige issue now. A politician who cannot help in organizing a cockfight event is considered ‘politically incompetant,’’ says Ravi, “It is a huge event, with many people surviving on it, so there’s naturally a pressure from the followers of the leader to allow them to host these events.” 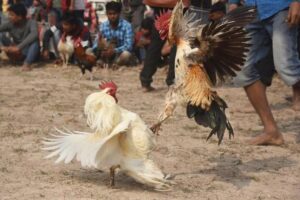 Previously, former MP Thota Narasimham, and former MLAs V Satyanarayana Varma, D Subbaraju, G Veeranjaneyulu, M Srinivasa Rao, B Prasad and Bonda Umamaheshwar Rao, were booked by police for participating in the bloodsport, despite a ban on it.
Earlier this week, the West Godavari police seized as many as 9601 knives used in cockfights and registered 1105 cases. The district police Superintendent K Narayan Naik informed that they have appointed a joint team in each mandal to prevent these gambling activities. The police have also engaged the Income Tax department to help them in the crackdown against gambling.
A top police official on condition of anonymity says that cockfights are impossible to eliminate thoroughly as they have gained social legitimacy, just like the bull-taming Jallikattu sport. “The ground reality is very different. The court pulls us up each time when someone files a litigation on this, but the litigant has no idea about the ground reality. Just like Jallikattu, the court should allow the game for just three days with restrictions.”
Speaking to #KhabarLive, West Godavari Deputy Superintendent of Police, Dilip Kumar says, “We have been taking all the measures to thwart these illegal activities. Our police teams are alert and raiding the cockpits, we have filed many cases so far.”
But these assurances come in every year. Tight security, screening and hefty penalties have failed to stop the bloodsport from being organised. Nor has the ban been successful in diminishing the acceptance it gets socially. With an annual turnover of Rs 500 crores and the political prestige of local leaders attached to it, the cockfighting industry prospers irrespective of which party comes to power in Andhra Pradesh. #KhabarLive #hydnews