Stolen from their nests and snatched away from their natural habitats, a staggering number of exotic birds are being openly sold in Hyderabad and are also being bred by some people. 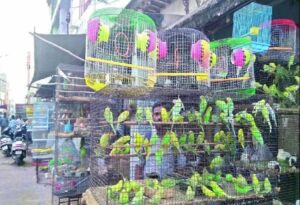 #KhabarLive visit to the market revealed that about 45-odd shops stock over 20,000 birds and animals, most of them exotic, and even those that are protected by law are being sold openly.

Filled with pet stores that cram hundreds of exotic birds and animals into cages at Dilsukhnagar, Malakpet and Chowk (old city area), a bustling pet markets in Hyderabad, continues to flourish in Hyderabad despite regulations and raids by the police and forest department.

The sheer visible ‘birds store’ in Dilsukhnagar area in Hyderabad is selling‍ the illegal exotic birds. Generally, sellers hidden away from the main streets, a bustling market in Old City in Hyderabad exhibits exotic birds, some of them belonging to endangered species. These birds are openly sold to hundreds of customers. Bird lovers ready to shell out huge sums can even buy endangered Hill Mynas and different kinds of Peacocks.

Nowadays, traders are also posting advertisements about these exotic species on e-commerce and social media websites so that people can place orders and check photographs placing orders. 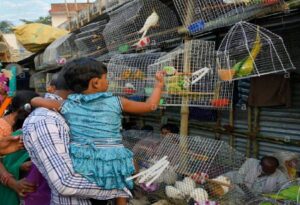 The market, famously known as Murgi Chowk, one of the oldest bird markets in the country, has illegal agents lurking in corners to sell various kinds of endangered birds to potential customers. Several of the birds they sell are listed in the Wildlife Protection Act, 1972, sources say.

A senior wildlife officer had recently met the Commissioner of Police, Hyderabad, seeking assistance for raiding a shop at Murgi Chowk. The police was also given hints about private individuals possessing wild animals and birds illegally in the city. The cops had offe-red to help the wildlife department, but the raid did not take place till now. 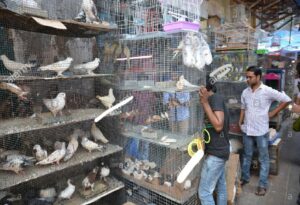 Sources from Murgi Chowk say that parrots, peacocks, owls, kestrels,  crows and pigeons, are easily available in the market. “Even if a customer wants  wild hares and snakes, they can also be arranged easily. I know a trader who sold Peafowl to one of his customers for a big sum recently,” a source said.

Most of the customers come to buy birds out of superstitious beliefs that the birds bring them good luck and act as charms to ward off evil.

“We were also told that buyers use birds, especially birds and crows, for black magic,” said an official from South Zone police.

Other customers buy the birds to keep them in their homes in cages as attractions. Wildlife officials say that they had rescued several birds three years ago after finding many endangered species in the market. They said they would conduct another operation soon and action will be taken if there are birds found that are listed in the Wildlife Protection Act, 1972.

“It is very unfortunate that most of these species, though protected, are still trafficked widely,” says Farida Tampal, State Director, World Wide Fund for Nature-India.

“Animals come into India stuffed into and suffocating in PVC pipes and plastic bottles. Most of the pet stores in Hyderabad have these birds on display in cages for people to buy them, even though it’s illegal,” says Navamita Mukherjee of Humane Society International/India.

“They are stuffed into socks, crammed into shoes and their beaks are taped shut,” adds B Shardul, an animal rights activist. 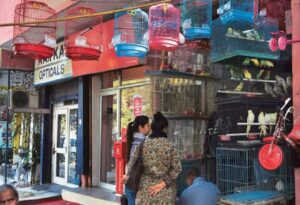 A bustling market in Old City, Murgi Chowk exhibits some of the exotic birds that come under the list of endangered species. According to a pet store owner in Banjara Hills, the popular choices are Hill Mynas, Australian cockatoos, African grey parrots (average cost Rs 60,000) and South American macaws (around Rs 1 lakh).

“Most of these birds are known for their incredible colour and their ability to chatter,” he says.

“Hunters use natural gums to trap wild parrots and in some cases, they injure one or two birds by puncturing their eyes and throw them on the ground. When these birds cry in pain, other birds come down to them in flocks and that is when these hunters throw a net or a huge cloth from above to capture them,” Shardul says.

“It is a given that over 50 per cent of the birds that they capture die in the process, but the ones that survive cover up for costs through sales,” he adds.

Forest department officials say they are helpless, since the Wildlife Protection Act, 1972, protects only native Indian birds like peacocks, weaverbirds, munias, parakeets, koel, mynahs, and some species of owls, which despite a ban, are available for sale across the country.

The government is yet to pass the amended version of Wildlife Protection Act that provides protection to exotic species and also curbs on wildlife trade, they say. #KhabarLive #hydnews