There was a time when agitations used to have some meaning and seriousness. Based on the issues, political parties used to put their ideological differences on backburner and used to join the fight forcing the government to take cognizance of their demand.

The government of the day also used to respond and see that some amicable solution to the problem was arrived at. But in the last two decades, the seriousness among the political parties seems to have vanished into thin air. They have stopped believing in united action. 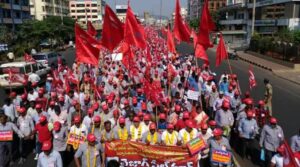 The first consideration for them is not the benefit of the people or protecting the interest of them but the political advantage their party would derive out of the agitation. The governments too have stopped being sensitive to the issue and have become totally subservient to the Central government and have given the fighting spirit to protect the State interests.

The concept of true federalism remains more of a slogan or its definition has been narrowed down to following what the Centre says. The regional and national parties when in power have stopped calling a spade a spade. They view the Opposition as enemies who need to be decimated politically. As a result, any agitation fails to gain steam and the governments, whether it is the Centre or the State, are able to have their say. Let us take for example the ongoing agitation for Vizag steel plant.

When the agitation for the steel plant started in 1966, it caught up like wildfire and life in Andhra Pradesh was paralysed. Social activist Amrita Rao’s fast unto death gave a new impetus to the agitation and the then Chief Minister Kasu Brahmananda Reddy convinced him that he would take up the issue with the Central government and saw that the fast was called off by offering lemon juice. Later, the then Central government led by Indira Gandhi in 1970 finally decided to set up the shore-based steel factory. Despite several delays, the steel plant finally dedicated to the nation by the Prime Minister of India P V Narasimha Rao in 1991.

Today, the same plant is on the threshold of being privatised. When people are protesting, the BJP at the Centre has made it clear that the issue of disinvestment was discussed in various parliamentary committees almost over a year back and report was submitted to the government supporting disinvestment and none of the public representatives from the State who were in the committee opposed and ensured that it was kept under wraps. The government also stated on the floor of Parliament that the disinvestment proposal was part of the broad policy framework of the GOI. But on public platforms and during TV debates, the State unit of the BJP says that the steel plant will not be privatised. They also claim to have submitted memorandum to the Centre to reconsider the issue. 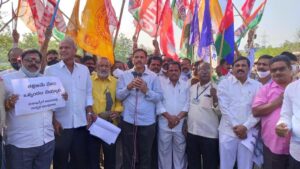 The ruling party says the Chief Minister has dashed off a letter to the Prime Minister and would move a resolution in Assembly during the budget session. But so far, no concerted attempt to put pressure on the Centre to reconsider its decision has been taken. The ruling party blames the Opposition. The Opposition accuses the ruling party of having connived with the Centre and had agreed for disinvestment.

This is akin to the shadow boxing that took place during the first five years on the Special Category Status to Andhra Pradesh which was insisted upon by the BJP and soon after coming to power it dumped the assurance given to Parliament by the UPA government. Here too, till last minute, everyone kept saying that it was an issue of sentiment and would fight to achieve it. Even an Assembly election was fought on this issue, but the Centre had its way, and nothing could be done. Even the second alternative, economic package the state lost.

ALSO READ:  Will 'Telugu States' Falls At The 'Mercy' Of Centre's Command?

The agitation to stop disinvestment of VSP so far had not picked up the kind of steam it should have and is not moving beyond the trade unions and social activists staging protests. There is no indication of NDA taking note of the ongoing agitation or examining alternative proposals like allotting captive mines or merging it with SAIL. It is said divided we fall. Are the public representatives listening? #KhabarLive #hydnews