The COVID-19 pandemic has put forth challenges that countries worldwide have not had to face in a long time. These are unprecedented times that have forced several countries to take preventive measures to contain the spread of the Coronavirus.

When containment measures to curb the COVID-19 outbreak were implemented in India, people from vulnerable communities, such as daily-wage earners and domestic helpers, were the worst affected. Among other things, their access to food had become difficult, severely limited or even absent in some cases, leaving them exposed to hunger and starvation during the lockdown.

In the event of widespread food insecurity triggered by a natural disaster, there is a need to collaborate services to provide food relief to the affected population. Groups and organisations with access to the necessary resources, such as corporate organisations and NGOs, can come together and aid the Government’s humanitarian efforts in such situations. In line with this, the Akshaya Patra Foundation has always come forward to undertake food relief across the country whenever called upon. 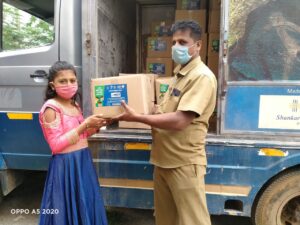 Akshaya Patra is one of the implementing partners of the Government of India’s Mid-Day Meal (MDM) Scheme. The organisation began by feeding 1,500 children in one city. Today, it reaches out to over 1.8 million children across 12 states and two union territories every day through its vast network of kitchens it has established over the last two decades. Throughout its journey, Akshaya Patra has gone beyond its school feeding operations to use its network to develop an efficient response system to aid the Government’s humanitarian efforts during times of distress through relief feeding. Akshaya Patra has utilised its kitchen infrastructure and resources to serve the affected communities in various locations across India (Karnataka, Kerala, Uttar Pradesh, Gujarat, Odisha, Assam and Bihar) as well as beyond the borders in Nepal during the earthquake in 2015.

In keeping with its essence to serve people, particularly in times of need, Akshaya Patra swiftly responded to the situation when the containment measures to curb the spread of the COVID-19 pandemic left millions of people without any access to food. In March 2020, as the country first went into a national lockdown, Akshaya Patra collaborated with the Government and its donors to set up packaging centres for food relief kits and used its kitchens for cooking meals for the marginalised. Meals were served and food relief kits with essential groceries were distributed to daily-wage earners, labourers at construction sites, workers in industrial areas, migrant labourers and rough sleepers. 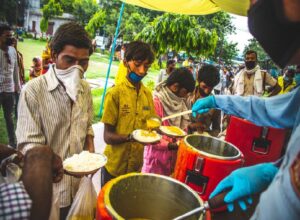 Akshaya Patra’s kitchens, which it has established across the country over the last 20 years, were vital to its food relief work. The organisation utilised its kitchens to prepare cooked meals and delivered them to the locations assigned by the local authorities where they were served to those in need. As with the cooked meals, food relief kits were also in accordance with the local palate. In India’s southern and eastern states, such as Karnataka, Telangana, and Odisha, food relief kits contained rice, dal, refined oil, spices, sambar masala and vegetables with long shelf-life, such as potatoes and pumpkins. In North India, rice and sambar masala were replaced with wheat flour and garam masala, respectively.

One of the beneficiaries of Akshaya Patra’s COVID-19 food assistance initiative, Mr Prahalad Biswas, a migrant worker, shares, “When the lockdown started, I cannot explain how scared we were. Work had ceased, and we couldn’t go outside to get food. All of us were left wondering where would we live, what we would eat, how would we survive?” He and 29 other migrant workers received food relief from Akshaya Patra. About this, Mr Biswas says, “We had lost the will to live, but Akshaya Patra revived us. I do not know how to thank them enough for whatever they have done for us. There are no words.” 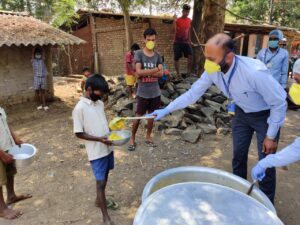 As with food relief kits, Happiness Kits also contained groceries, but these kits were designed specifically for MDM beneficiaries. These kits focused on health and nutrition and hygiene and education of the Foundation’s beneficiary children during the pandemic, with their contents ranging from ragi flour and glucose biscuits to toothpaste, toothbrush, sanitary pack for girls, colour pencils/crayons and activity workbook. With school closures resulting from the pandemic keeping millions of children away from the classroom, Akshaya Patra endeavoured to work with the Government and donors take learning and nutrition to its beneficiary children’s doorstep. Happiness kits were distributed in Andhra Pradesh, Assam, Dadra & Nagar Haveli, Gujarat, Karnataka, Maharashtra, Odisha, Rajasthan, Telangana and Uttar Pradesh.

Since March, Akshaya Patra has strived to address food and nutrition insecurity triggered by the pandemic by adopting need-based solutions. In addition to cooked meals and food relief kits, the Foundation also supplied ‘Meals-on-the-Go’ kits to migrants on Special Shramik trains in Bengaluru, Mumbai, Delhi and Gurgaon to help them on their journey. Through these endeavours, Akshaya Patra effectively demonstrated that it is conscious of its responsibility towards the children and communities and reiterated its commitment to support the Government’s efforts to serve them. #KhabarLive #hydnews

How To Make Money With Olymp Trade Platform?

What Features Should Crypto Tax Software Must Have?