One of the oldest mosques of Qutub Shahi era and an archaeological grandeur is slowly giving away to the sands of time in Hyderabad. 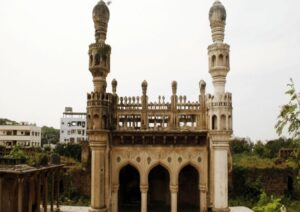 The well-known landmark before the concrete jungle took shape around the Qutub Shahi mosque in Shaikpet, a protected monument, is nothing more than a pile of ruins.

The centuries-old mosque, which once housed hundreds of worshipers, has been neglected by authorities. It is said to have been built during the reign of Ibrahim Quli Qutb Shah (1550-1580), the fourth ruler of the Golconda dynasty. The structure was built on the way to Bidar. The entrance resembles the Mecca Masjid, and the minars (minarets) of the mosque look similar to the iconic Charminar.

“The mosque has been under the custody of the State Heritage department for at least past few decades and is a protected monument. But, its condition shows the negligence of authorities. The structure is now in a dilapidated state. The surroundings of mosque have turned into a jungle with grass and bushes. Garbage is dumped on the premises, which has turned into home for stray dogs,” said Mohammed Habeebuddin, a heritage activist. 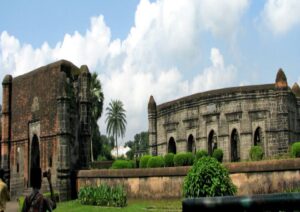 The monument, under Wakf Gazette in 1952, is a protected mosque. It is in a fair state of preservation and deserves more attention. The board outside reads: “This has been declared as an ancient monument and notified as a protected monument under Andhra Pradesh Ancient and Historical Monuments and Archaeological Sites and remains under the Act 1960 under Section 30 (1).”

Replying to a RTI query by an activist, the department said the ancient monument is protected. “The matter of restoration of the mosque is already addressed to the government and also to seek funds of Rs 81 lakh for conservation; but the department is waiting for the necessary orders.”

Residents represented to the department and sought permission to transfer the mosque to the Wakf Board and form a committee. They urged the department to hand over the mosque for its conservation and to conduct five prayers in a day. “The mosque has ancient architecture. It is vacant since years. Due to non-performing of prayers and inaccessibility vested interests are dumping garbage, debris and other waste inside the mosque. “Locals agree to clear the mosque with their own funds. If maintenance is not taken up there is a possibility that the structure may collapse any time,” said a representation by Mohammed Khan, a resident of Shaikpet.

“No funds are sanctioned by the government. No work was done to protect the mosque, even though citizens themselves are agreeing to take up the conservation work. The department is yet to take a decision. The condition of the mosque is turning foulest to terrible. In last year’s rains a portion of mosque collapsed and needs to be restored as the earliest,” added Habeebuddin. #KhabarLive #hydnews