Despite the government claim that Telangana is in a much better situation than other states and people are cooperating in the implementation of lockdown strictly, the ground realities seem to be different in the state and making worse to surge this killer disease. 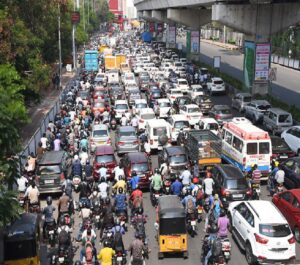 A round to various colonies between 6 am and 10 am gives an impression that the relaxed hours are the time when coronavirus can have a free run. During the first wave, all shops and supermarkets used to ensure people maintain social distancing and keep hand sanitisers at the entrance. But now that seems to be missing. Big supermarkets check body temperature but now there is no emphasis on social distancing during the relaxed hours.

In the Old City areas and Toli Chowki, Malakpet, Abids, Kothi and Secunderabad markets are brimming with customers. All vegetable markets across the state are full with people buying vegetables as if tomorrow does not exist. And the worst part is neither the sellers or the buyers wear masks properly.

A drive around different parts of the city like L B Nagar, Kothi, Abids, Punjagutta, Banjara Hills, Srinagar Colony to Hi-Tec city presented a disturbing tendency. Even after 10 am vehicles were seen moving.

ALSO READ:  A Tribute To Novel Writer 'Ibn-E-Safi', Whose Books Are Bestsellers 40 Years After His Death

The rush had reduced considerably but still many were seen moving. In lanes and bylanes of Srinagar colony, children were seen playing cricket without masks. The lane in which Education Minister Sabitha Indra Reddy stays also presented a similar picture.

Towards evening, the traffic increased in Hi-Tec city and Punjagutta areas. A truck carrying household goods was also seen moving during the lockdown period.

Apparently, someone was shifting their house. Police were seen stopping vehicles and allowing those who were either going for work or to hospitals, etc, after checking documents in Kukatpally main road during the morning hours but in many other areas they were just observing the vehicle movement. 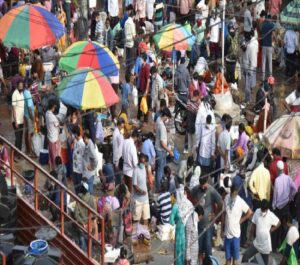 With no traffic on roads and no water in Musi, people were seen sitting in groups and playing cards right adjacent to the Chaderghat bridge, a stone’s throw distance from the police station.

Some children were playing cricket. Past 9 pm, in many places in Banjara Hills, roads particularly the inner roads like Krishna Nagar and Yousufguda, vehicles were seen plying and some cars with family members were also seen going around. #KhabarLive #hydnews