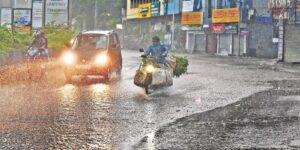 This time, heavy rains lashed Hyderabad and other parts of the state on Sunday, bringing forth complaints of inundation of some areas around lakes.

A warning for the next 24 hours issued by the Indian Meteorological Department-Hyderabad said thunderstorms accompanied by lightning were very likely to occur at isolated places all over the state.

“There is a low-pressure zone over south coastal Andhra Pradesh. Under its influence the state has been receiving rains. Many districts in the state have reported rainfall. We predict that the weather would continue for the next 24 to 48 hours,” said IMD-H director Dr K. Nagaratna. 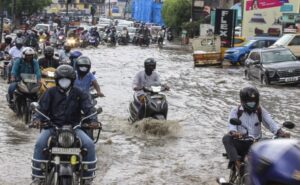 So far this season, the state has received overall rainfall of 172.7 mm as against the normal of 114.3 mm. This means that the state has on average received 51 per cent more rainfall.

Following Sunday’s sudden rains, people took to social media platforms to both comment on the weather as well as complain about the civic conditions. On Sunday Twitter was abuzz with pictures of water-logged roads.

“The roads are in a pretty bad shape due to which water from all the surrounding areas flows into this area. Request you to resolve this ASAP as this is the need of hour for us. With a small rain this is the case (sic),” said one user.

The rains did not lead to any power disruption. “There might have been heavy rainfall in parts of the city but since there were no wind we did not have to cut power,” said a source from the TS Southern Power Distribution Company Limited. 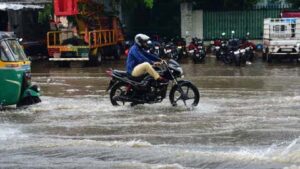 Areas around some water bodies were inundated. A report said areas adjoining the Kapra lake,  colonies of DLR Enclave and Rajarajeshwari witnessed flooding as the irrigation department failed to complete works on the lake in time.

There was silt oozing out from drains on to the roads, making travel a scary ordeal as there was a chance that cars and bikes could skid.

Traffic police, GHMC officials seen on spots to complete the snarled woes of citizens complaints. While flood disaster response team also seen working. Meanwhile, no response or statement flashed from government or any political parties in this regard. #KhabarLive #hydnews