The magnificent Indo-Islamic architectural structure in recent time is seen at Warangal fort ruins, where still found the world-class architecture with the best craftsmanship to make the stamp of Islamic culture and heritage in Telangana.

Much has been written about the Asaf Jahis and even more about the Qutb Shahis and the architectural marvels of their times. However, not much attention has been paid to the oldest surviving Indo-Islamic heritage structures of the state of Telangana that predate both these dynasties by a few hundred years.

The story begins in early 14th century when Ulugh Khan (future Mohammed bin Tughlaq) captured the Warangal fort from the Kakatiyas after no less than eight major expeditions by the Delhi Sultanate since mid-13th century that navigated endless defeats and vassal making deals. Tughlaq’s predecessor Alauddin Khilji saw the prosperous kingdom as a means to finance wars with Rajputs and Mongols.

At the same time he had a particular reverence for the valiant Pratapa Rudra, the then Kakatiya king and the last of the dynasty. He would caution his military against aggression and to secure his subservience to be his vassal ruler of Deccan instead.

By the time of Tughlaq’s expedition, the vassal making strategy proved to be a repeated futile effort. He instead chose a complete conquest of the kingdom and established the Sultanate authority in the Deccan, after a five-month long siege on the Warangal fort. Warangal, which was called “Orugallu” at the time, (city built on a single rock) was renamed as “Sultanpur” and even a mint established. The significance Tughlaq attributed to the city is evident from the fact it was given the title “Daru’l-Mulk”, an epithet used for Delhi, the capital of Sultanate, that indicates Warangal was seen as a provincial capital.

Pratapa Rudra is believed to have committed suicide on the banks of river Narmada while en route to Delhi as a prisoner of war. Little did he know the Delhi Sultanate’s stint would hardly last for less than a decade. Nevertheless, the Sultanate left its footprint in the transformation of Warangal from a Shaiva landscape to a Muslim Sultanate with a couple of monuments that now serve as the oldest Indo-Islamic heritage structures of the state.

In the center of the fort complex was the great Swayambhu Shiva temple with a chaturmukha (four faced) Shiva Linga, whose political significance Tughlaq grasped immediately. He realized the temple was an emblem of the state and the source of its authority. Every structure standing within the temple complex was razed to the foundation and carefully buried, sparing only the four ritual gateways, knows as “Toranas” that may have arrested him in his tracks with their architectural magnificence. These Toranas would later become an inspiration in the building of the city of Hyderabad and even find a place in the state emblem of contemporary Telangana formed in 2014.

Tughlaq had to reimagine the temple complex to register a change of power firmly in the minds of his subjects. He repurposed the four Toranas that initially served the chaturmukha Shiva Linga to gaze into the cosmos in four cardinal directions, to form four gateway entries to the complex instead. He set out to build a congregational mosque, Jami Masjid in the place of the temple, salvaging from the structures on site and adding additional masonry. Very little of the mosque remains today except for five beams, five columns and a ceiling slab but the irrefutable evidence of the mosque is presented in the fragments of minbar and mihrab chambers lying within the ruins.

Two theories of what might have caused the current appearance of the mosque are viable. One, the massive scale on which the mosque was undertaken (with the mihrab bay twice as large as the next largest Sultanate conquest mosque in Daulatabad) and the absence of many other structural remains of the building among the ruins, it may be concluded that the mosque was never really completed. The second theory is that the mosque was dismantled just as the temple before it, when the local chieftains, Musunuri Nayakas claimed Warangal back from the Sultanate in early 1330s and the dismantled fragments repurposed.

ALSO READ:  'Golkonda Fort - Our Heritage And Our Identity'

Interestingly, Warangal had already witnessed by then, the ritual repurposing of places of worship with earlier power transformations. For example, in the center of Hanamkonda, a suburb of Warangal lies on a massive boulder, the Padmakshi temple with a Shaiva deity that had been repurposed from a Jain temple. Syed Hussain Bilgrami and Ghulam Yazdani both speculate the four Toranas were built much before the Kakatiya era and were a part of a Buddhist Stupa in the region, repurposed into a Shaiva temple cosmos.

Although in a much better shape than the Jami Masjid but also abandoned owing to it’s crumbling structure, is the Konda Masjid in the southern quadrant of the fort complex, dated from the same era. The name suggests it may have been at an elevation up a hill. The mosque interiors are three bays deep and thirteen bays long with the qibla wall containing three mihrabs in the third, seventh and eleventh bays, with each mihrab consisting outer and inner nested arches. Konda Masjid could have been an alternative to the incomplete Jami Masjid or one of the two was in use by the nobility and the other by common subjects.

Recuperating from the post-apocalypse vibes from the two mosques, one is enchanted to find a structure that is rather very well preserved unlike the mosques – Khush Mahal, an audience hall built by the Tughlaq governor of Warangal. Initially misdated by medieval historians, this gigantic monument is continued to be misdated by the Archeological Survey of India under whose care the Warangal fort complex falls, owing to it’s usage by Shitab Khan (aka Sita Pati), an enigmatic local chieftain who ruled the area sometime in early-16th century. Hence it is also called as “Shitab Khan Palace”.

The Khush Mahal measuring 16x38x12 meters is described as a large, massive and lofty Mohammedan building facing North which exudes a sense of military strength and majesty, with slightly sloping walls, a typical Tughlaq style architecture. The audience hall is entered from the North through a nesting series of three diminishing transverse arches. The inside of the hall are seven transverse arches that exhibit slightly horseshoe profile, another typical Tughlaq stylistic feature. A rectangular pool in the middle with a gravity-fed fountain, six arched doorways on each side with surmounting clerestory windows etc. are some of the salient features of the structure.

The resemblance to Tughlaq tombs and to the audience hall in Tughlaqabab in Delhi unmistakably dates the structure to the Tughlaq era. It happens to be the best-preserved audience hall from anywhere in the extensive domains of the Delhi Sultanate. The experience of a walk inside the audience hall and the compound where ASI has now installed several excavated Jain, Buddhist and Shaiva artifacts is bound to offer a time travel into the region’s past.

These lonely heritage structures lay there within the Warangal fort complex, never really embraced by the predominantly Hindu pre-medieval historians of the region nor by the equally predominant Muslim medieval historians, as they date to a transformational period, a rather no-mans-land between the end of the Hindu Kakatiya era and the beginning of Muslim dynastic era with the Bahmanis. The total eclipse of Warangal city in the Bahmani period was followed by the rising glory of Golconda and Hyderabad, the famous seats of the Qutb Shahi kings and the house of Asaf Jah.

It is unclear whether these monuments are also included in the ruins of the Warangal Fort that await “UNESCO World Heritage Site” status pending since 2014 along with the Qutb Shahi monuments of Hyderabad pending since 2010. #KhabarLive #hydnews 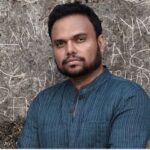 About the author: Moses Tulasi is a Hyderabad based filmmaker who occasionally writes about Telangana and Hyderabad history and culture.