The reality behind the ornamental fishery business is quite exciting. The dazzling beauties as fishes termed, as they are commonly referred to, sashay and swim down the streaming ramp, to be judged on multiple attributes such as the curvature and figure of their body, colour and texture of the skin, gait, poise, beauty, grace and overall attractiveness. 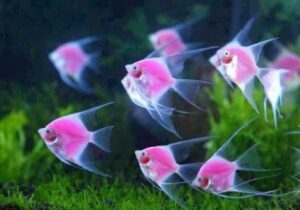 Quite like our Miss World or Miss Universe contest; the standards to evaluate them are exacting. The winner gets crowned as Miss Goldfish or Miss Betta Fish or another one of thousands of such species of ornamental or aquarium fish characterised by vibrancy of colours, the most beautiful of its kind in the world.

These beauty pageants have become quite a regular feature in China, Singapore, Japan and quite a few other countries. What more, the winner inevitably fetches a price running into thousands of dollars. Platinum Arowana, a freshwater ornamental fish, holds the record, reporting a selling price of US$ 4,00,000. Yes, four lakh dollars for just one small animal.

Known to us as the vaastu fish for its association with good omens, we breed it in India too, primarily in West Bengal and Tamil Nadu. Polka Dot Stingray has reported a global high price of US$ 1,00,000 followed by Peppermint Angelfish at US$ 30,000. Though high in individual commodity prices, the global trade in ornamental fish is still a minuscule of the total volume and value of trade in fishery products. 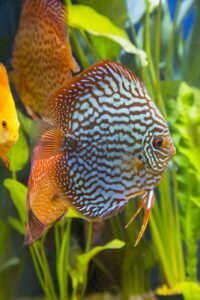 India stands at the number two position, behind China, in the world in fish production. We are the biggest shrimp exporter, capturing 26% of the world market.

Amongst all agriculture commodities, fish and fishery products are the biggest contributors to the export basket in terms of value, an impressive Rs. 47,000 crores approximately. However, the contribution of ornamental fish to this revenue is an embarrassing Rs. 6 crores.

Therefore, it is inexplicable why we stand nowhere when it comes to a share in the production or trade of ornamental fish. The question assumes greater mystery when faced with the fact that more than 60% of species traded globally are freshwater, and we possess immense and diverse inland freshwater resources. In fact, we are among the world leaders in freshwater fish production, but why not ornamental fish. Of the approximately 4,500 species identified, the global trade in ornamental fish is dominated by 2,500 odd species. 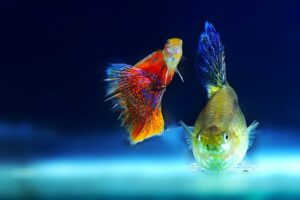 Another comparative advantage that we have, and should have capitalised by now, is that 80% of these valuable species are to be found in tropical waters and more than 90% are farmed. This surely opens a sea of opportunities for us to diversify our farming to include ornamental fish. It is more than a viable option, even for small scale and landless farmers, women, self-help groups and cooperatives.

Above all, farming ornamental fish is equally remunerative for small as also big units. The consumer base too is an expanse; from rupees 25 or even less per fish to a mindboggling extreme of more than lakhs of rupees for a single fish.

The global trade in ornamental fish, including the ancillaries such as aquaria etc. is estimated between US$ 15 to 20 billion, fish alone being around US$ 8 to 15 billion. It has been consistently growing at above 8% per annum. Controlling above 11% of the global trade, Singapore stands atop.

Curiously, Singapore imports brooders, seeds and even grown fish; adds value and exports, becoming a leader without any farming or capture. Even our neighbour Sri Lanka is in the forefront of global trade sharing 4.3% of the total value. We have, however, been a laggard with less than 0.4% share globally. We could only go forward from here considering that we hold all the advantages in this sector. 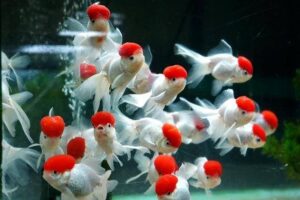 A study estimates the domestic demand for aquarium fish to go upto Rs. 12,000 crores by the year 2025, meaning we need to register an annual growth of nearly 40%. Is it in the realm of possibility?

Besides the fact that we have the natural resources in abundance for ornamental fish to flourish, this is one activity which is more conducive than others to backyard farming. There is no rigidity in the requirement of infrastructure.

A small farmer could take it up in a pond, indigenously fabricated aquarium or a variety of dishes and bowls; so even ownership of land may not be a prerequisite. A bare minimum investment of Rs. 50,000 to 1,00,000 in an area as small as 300 square feet could yield more than Rs. 5,000 per month. But then this would be a low input and low output model, bereft of the benefits that a well-bred species could bestow.

If we could support our farmers through a scientific breeding programme that enhances the physical attributes of the fish, the very attributes which make it worthy of participation in a beauty pageant, the returns could be more than one multiple of 5000. We have already noted the recorded sale of Platinum Arowana at US$ 4,00,000 which translates into a staggering Rs. 3,20,00,000.

This is our fish too, and even if we strike off more than a couple of zeroes from this figure, it stays to be temptingly profitable. We have the scientists, the research, the breeding programmes and now also the recognition of the opportunity not to be missed any further.

ALSO READ:  Is Telangana CM KCR 'Under Severe Pressure' And Ready To Step Down For Son KTR? 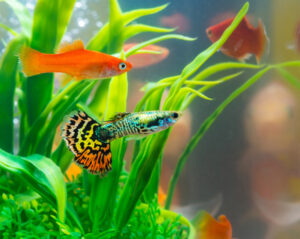 The Pradhan Mantri Matsya Sampada Yojna (PMMSY) has a strong component of support to ornamental fish farming. A welcome aspect of the scheme is that it strategises budgetary support to attract private investment, and also to provide backend support to the farmers by way of establishment of brood banks and hatcheries.

After all, breed would be the single most dominant determinant of the return the farmer could expect. And in the case of ornamental fish, appearance is not deceptive but the core virtue and value. The National Cooperative Development Corporation (NCDC) too has developed schemes to encourage and finance cooperatives and Farmer Producer Organisations (FPOs) for farming ornamental fish.

The vocation gets further integrated with a host of other activities such as farming and/or harvesting aquatic plants, expanding aquarium manufacturing industry, feed units, and lo and behold even fish beauty industry. The proof of the pudding, as they say, is in eating. 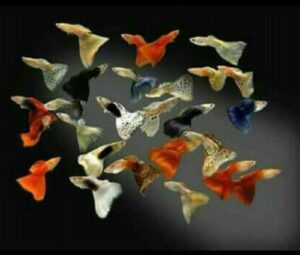 In quite a few countries we find fish plastic surgeons; an eyelid lift here, a fin enlargement there, a tanning of the skin, a brightening of colours, what have you; there is a huge window of fish cosmetic industry that might beckon us too one day. Being an inexpensive low maintenance pet, ornamental fish offers a win-win situation both for the farmer/breeder and the consumer. Moreover, it does not simply offer the conventional alternative of livelihood but opens an opportunity for prosperity, even if taken up on a small scale.

A little push and support from the government would do wonders. Good quality brooders and seed; regular value addition in shape, size, colour and appearance; facilitating marketing are the only few basic interventions a farmer would expect from the government.

Keeping home ornamental/aquarium fish as a pet is emerging as one of the most popular hobbies worldwide. These strikingly beautiful, colourful and quiet creatures are considered an icon of mood upliftment, cheer, stress relief and positivity. So, the number of households with aquariums is bound to grow from the present 1.25%. Mega sized aquaria with a montage of floating colours are each day attracting more and more tourists; educational institutions are realising that aquaria is a good educational tool. The expected all round growth in demand surely calls for an aggressive farming of this fish.

The advantages are huge: the market demands both high value exotic/engineered species as also low priced indigenous varieties. So, a small or marginal farmer is at no great disadvantage as the big one. It offers a high degree of flexibility in the scale of operation; it could be a backyard cottage enterprise or an industrial scale operation.

Our marine and freshwater resources, coupled with the biodiversity hotspots give us close to a thousand varied species that are traded, an unmatchable advantage. And now that we have recognised the potential of ornamental fishery in our rural economy, we need to develop sophisticated breeding technologies to reduce, and gradually eliminate, dependence upon collection of brooders and seed from the wild. A corollary would be introduction of scientific farming practices including feed management, and on the management front coordination of the supply and values chain. 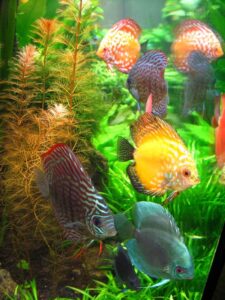 In a nutshell, develop and standardise the advanced breeding technologies; disseminate them. Ensure input supply, of good quality. After all, the core of good quality output in livestock and fishery produce, including ornamental fish, is quality of seed and feed. Since the monetary value of this pulsating ornament is determined by its appearance and attractiveness, the post harvest support in terms of packaging and the subsequent promotion and marketing is critical. The farmer would expect and require handholding support only to this limited extent.

The global journey started in 2500 BC when the first vivarium was established in Rome, and it housed small colourful fish too in addition to a variety of aquatic plants and organisms. Hospitality got a new definition through the decorative fish in the 27 BC Rome when they would be placed in small tanks, made of marble, under the beds of important guests; for good fortune and as a gesture of gratitude. But these were all wild caught creatures. Formal breeding started in 1000 AD China, but it was as late as 1930 that global trade in ornamental fish commenced; and right from our neighbourhood Sri Lanka. 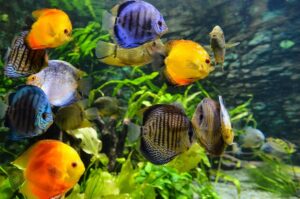 The contribution of ornamental fishery to the economy, especially rural and agricultural, may be small, nay negligible, today; but an undisputed recognition has gained firm foothold that we could be the global leaders here too. A slight push to domestic demand and a nudge towards exports should not be too difficult. We have the insanely expensive Platinum Arowana, Peppermint Angelfish, Bladefin Basslet and a host of other valuable ornamental fish indigenous species. An organised breeding and genetic improvement programme could catapult us to the top.

Oscar Wilde, the cynical Irish author has said, “Let us have no machine made ornaments at all; it is all bad and worthless and ugly.” Aquarium fish are natural ornaments, priceless and invaluable. Let us promote them aggressively, and strategically too. This fishy business is good. #KhabarLive #hydnews