Tribal or adivasi food systems are deeply embedded in local culture and traditions, given that the way of life of these indigenous peoples is so closely linked to nature and its resources. 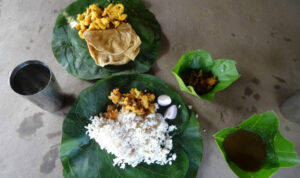 Food is an important part of our identity and culture. We are known by what we eat. It reflects the geography to which we belong and the locally available resources
used in our cuisine.

Tribal food systems are deeply embedded in local culture and traditions, given that the way of life of these indigenous peoples is so closely linked to nature and its resources.

Telangana and Andhra Pradesh are a natural abode and home to numerous tribal or adivasi communities constituting a little over 25% of the total population.

These communities, in addition to their rich social and cultural traditions, practice immensely diverse food practices which are based on locally available resources and techniques. Such tribal food systems have been instrumental in maintaining the sovereignty and self-reliance of these communities. They have taken many varieties of vegetables and tubers, wild or grown, to enrich their diet, as also to meet their requirements of calcium, iron, minerals and vitamins. Studies reveal that tribal food provides a high level of immunity from disease and deformities.

The realm of medicinal plants and herbal products is even vaster. According to the All India Coordinated Research Project on Ethnobiology, tribal communities are acquainted with the use of over 9,000 species of plants including food plants, while specifically for the purpose of healing they know the use of around 7,500 species of plants. 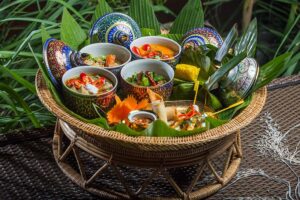 The Adivasi food of Telugu States may be defined in terms of a few characteristic features :  food is influenced by physiological needs and geographical conditions and the habit is closely associated with habitat. This means food habits are guided by locally available resources. Adivasis consume boiled food like rice, pulses, herbs or ‘saag’ and meat and, on some occasions, animal or bird meat is roasted on a fire. Because of these consistent food habits that are based on locally available resources, instances of serious diseases are considerably lower among Adivasis.

ALSO READ:  BJP Is Distributing 50 Lakh Phones In 'Telugu States' With 'Narendra Modi And BJP Apps' On Them

Common food-processing equipment includes a wooden pounder used for breaking rice or millets, a round double stone grinder used for breaking pulses, etc, a stone slab with a mortar (most commonly used to make chutneys) and a wooden mortar to grind spices. It’s worth mentioning here that the use of this traditional equipment helps minimise loss of nutrients as they do not produce the unnecessary extra heat or pressure created by mechanised equipment. 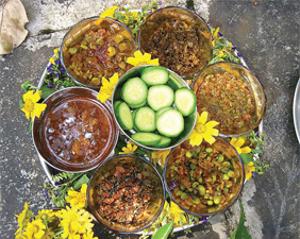 Dhuska is undeniably the most popular in all-weather, all-time snack. A deep-fried ball made from a rice-based batter, it can simply be nibbled as it is or had with a chutney or ghugni. But it tastes best with mutton or desi chicken curry.

Having originated from the Koya and Lambda communities, it is always served during marriage rituals, especially during the seeing off ceremony of the bride. From there, dhuska has gradually evolved into a commonly loved snack in the urban spaces as well.

The ingredients do vary a little in the way the batter is made by Adivasis and non-Adivasis. Adivasis only use a combination of rice and urad dal, whereas non-Adivasis add chana dal as well.

Burra is another popular snack which has found its way from the Adivasi cuisine to mass adoption in society. Made of urad dal batter, the small balls are deep fried and taste well with any chutney.

Apart from regular snacks like dhuska and burra, there are snacks based on the seasons. Popular ones among these, which are routinely consumed in an Adivasi household, include boiled peanuts, boiled sweet potato and dry chudwa or flattened rice, something that can be munched while you work, talk or do anything else.

Non-Vegetarian Food
The non-vegetarian food basket of Adivasis is equally diverse. These include micro food sources like ant eggs, small game as well as big meat.

ALSO READ:  If 'Ambedkar' Was A ‘True Hindu’ Then Why Did He 'Convert'?

Also on the menu is a large variety of local fish available during different seasons, popularly prepared as curry or a mash. Within the meat category, pork is a prominent option which is locally available, affordable and which can be raised within the tribal dwelling.

Traditionally, mahua liquor is given to women after child delivery which keeps the mother warm, besides providing strength because of the iron supplement present in mahua. #KhabarLive #hydnews