With Congress losing its deposit in the recent by-poll in Telangana, senior party leaders have begun training their guns at the party chief.

The by-poll in Huzurabad in Telangana has triggered an animated discussion on whether the Congress, led by Revanth Reddy, can challenge the Kalvakuntla Chandrasekhar Rao-led Telangana Rastra Samithi (TRS) in the state’s assembly election in 2023.

Even though the Congress claims credit for carving Telangana out of Andhra Pradesh, it has faced string of defeats right from the first election held in 2014. Consequently, the sagging morale that has crept into the party has triggered an exodus of party MLAs to the ruling TRS. 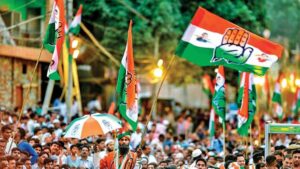 Against this backdrop, Revanth Reddy, who left the Telugu Desam Party to join the Congress, was preferred over a battery of party loyalists for the top post in the last week of June, two and a half years ahead of the next assembly election.

With fire in the belly and the ability to hit back at KCR in his own idiom, Revanth Reddy was seen as the ideal candidate to re-energise the party. That he had a considerable following among the youth also helped his case.

While choosing him, the Congress bosses in Delhi did not listen to dissenting voices from the party’s old guard.

But he has faced a trial by fire in the form of the Huzurubad by-election in the north of the state soon after he became the party’s leader. The test was not only to reinvigorate the party rank and file by putting up an impressive show in the Huzurabad assembly segment but also to take his rivals within the party on board.

But the grand old party perform abysmally, losing the deposit and tallying just 3,014 votes (1.45 %), less than those polled under the category of NOTA (none of the above). In the 2018 assembly election, the Congress finished second in Huzurabad, securing 61,121 votes (34.60%) with Padi Kaushik Reddy as its candidate.

Citing the party’s poor show in the by-election, Revanth Reddy’s critics say he has failed on both counts. The sharp decline in the party’s vote share has brought to the fore his earlier avatar as a Sangh parivar karyakartha.

Komatireddy Venkata Reddy, the party MP from Bhongiri and a strong contender for the state party chief post, went on record attributing the BJP’s win to the support it had allegedly received from the Congress under Revanth Reddy’s leadership.

Around the same time, party rebel and former chief minister of Punjab Captain Amarinder Singh shot off a letter to party president Sonia Gandhi raising serious doubts over the party’s potential to take on the saffron party. In a bid to drive his point home, he even mentioned Revanth Reddy’s anointment as Telangana party president and said people with “RSS backgrounds” were being given importance.

The huge drop in the Congress’s vote share obviously gave his internal rivals the ammunition to train their guns at Revanth. The party top brass even summoned Revanth Reddy and his detractors for a war room discussion in Delhi on the Huzurabad setback a few days ago.

A Congress leader, who had earlier served as a minister, told #KhabarLive that the party’s chances of a win were slim, given the past election history. “But what’s worrying the most the s huge erosion of votes from OBCs,” the leader said, requesting anonymity.

The former minister said Reddy alone is to blame for the fiasco because of his “one-man show” attitude. The by-election was necessitated by Etela Rajender’s resignation as the TRS MLA in June. Though the bypoll was held in October, months after the resignation, Revanth Reddy failed to find a local candidate, he said.

The candidature of Balmuri Venkat, a non-local from Jagityal and a political lightweight, was finalised in the last minute. The Reddy community, with around 25,000 to 30,000 votes, were a decisive factor in the assembly segment and the community had been associated with the Congress for a long time. Selecting someone from outside the Reddy community was a strategic blunder committed by Revanth Reddy, he added.

The PCC chief is accused by rivals within the party of running the party without taking different groups into confidence.

Two rallies held in Indravelli and Bhongiri have been cited as pointers to Revanth Reddy’s alleged unilateral style of functioning. A section of the Congress leaders alleged that the party’s senior leaders from the said regions were not consulted before finalising both these crucial events.

While Bhongiri is represented by party MP Komatireddy Rajagopal Reddy, Maheswar Reddy, the chairman of the All India Congress Committee (AICC) Programme Implementation Committee, hails from Adilabad that includes Indravelli.

As a result, both Komatireddy Rajagopal Reddy and Maheswar Reddy chose to stay away from the scheduled programmes.

Can Revanth do a Channa Reddy? 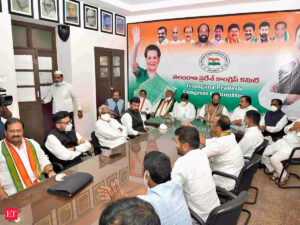 The Congress Loyalists Forum, according to one of its founders, has complained to the party leadership in Delhi that it is unlikely that the Congress will come to power if Revanth Reddy fails to mend his ways and be accommodative to all sections of the party.

The forum was established in the run-up to Revanth Reddy’s appointment with an appeal to the party leadership to prefer a loyalist over a ‘defector’ for the top post.

“How can an outsider with no ideological commitment and binding factor keep the flock together?” asked a senior leader, citing the slew of desertions that the party has suffered in the past seven years.

The grand old party in Telangana is craving for a leader like Marri Channa Reddy, who with his ability to infuse confidence in the ranks, rode the party to power twice at difficult times —1978 and 1989.

Facing the onslaught of the Reddy Congress headed by Kasu Bramhananda Reddy, Channa Reddy led the Congress (I), the faction headed by Indira Gandhi, to power in the state election in 1978 by securing 178 seats in 294-member state assembly.

“The loyalty and ideological commitment demonstrated by Chenna Reddy helped the Congress to register a sterling performance in two critical occasions. The party is missing that now,” observed a Chenna Reddy loyalist.

But Tirumali Inukonda, an analyst and former professor in history from Delhi University, has batted for social engineering with OBCs at the helm as an alternative to the Reddy-led caste coalition on which the Congress is heavily dependent in Telangana at present.

The feudal role played by Reddys during the Nizam’s rule means they are alienated from the OBCs and Scheduled Castes and Scheduled Tribes, Tirumali added.

Realising this ground reality, the BJP has been trying to woo the OBCs, who constitute more than 50% of the state’s population. This is the underlying factor for the saffron surge in Telangana, marked by its victories in the by-elections in Dubbak and Huzurabad in succession, major windfalls in the general elections in 2019 and the Greater Hyderabad Municipal Corporation Elections (GHMC) in December 2020.

With these gains, the BJP will be able to project itself as the party that is ready to dethrone the TRS in the next assembly election, he said. #KhabarLive #hydnews