The high tomato prices may take a month or more to return to normal after incessant rain destroyed crops and caused transport delays in several districts of Telugu States and Tamil Nadu and other southern states. 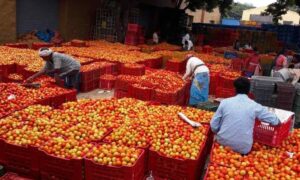 Trucks are stuck in Nellore and Renigunta in Andhra Pradesh as both districts suffered a bridge collapse in the recent rains. More are stranded on a flooded highway in Tiruchirappalli in Tamil Nadu.

These delays follow rain damage suffered by tomato farmers last month especially in the Madukkarai and Baireddipalle Mandal districts of Tamil Nadu. Since then the state has been buying tomatoes from Maharashtra and Karnataka.

The volume of tomatoes being transported to Chennai from these states halved from 1,050 tonnes a week in October to 540 last month, mainly due to delays in the arrival of the vegetable-laden trucks. Six trucks of tomatoes would reach Chennai every day but now it’s just 2 or 3.

Manjur Ahmed, a truck driver, reached the Koyambedu Wholesale Market Complex in Chennai from Nashik on the sixth day of what is usually a four-day journey. “We are not given an early pass by the police, and it took us around 3 days to get out of the situation in Nellore.” Shabazz has been relying on tomatoes from Nashik and parts of Karnataka since mid November. “Even the stock we are getting is very limited as fewer trucks are plying.”

On Wednesday the wholesale price of tomatoes was Rs 72 per kilo in Chennai, while retailers were selling the fruit at Rs 80–90.

Vegetable merchants also pointed out that successive fuel price hikes had imposed an additional Rs 5,000–6,000 per week in transportation costs over 2019.

There is a chance of renewed tomato scarcity in the state, as the three-month growing season in districts like Nashik (Maharashtra) and Kolar (Karnataka) will be over in a couple of weeks.

Adnan Sayeed, who runs a tomato farm in Nashik, said the “Maharashtra tomato stock for selling it to other states will get over by mid-December, and then states will have to buy it from states like MP, where the harvest will be ready in January.” 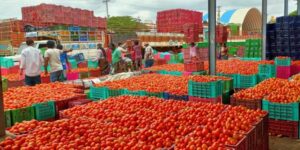 Sayeed estimates that tomato prices in Chennai will take a month or two to dip.

“The tomato prices in Tamil Nadu are shocking,” he added. While he charges Rs 44/kg to package and transport the crop to other states, tomato prices in Chennai rose from Rs 45/kg in October to a dizzying Rs 160/kg last month.

People are struggling to buy other routine vegetables as well, like onions, which are retailing at a nine month high of Rs 65 per kilo. #KhabarLive #hydnews