On the onset of mid-winter, the migratory birds are coming to Telangana and spotted to many bird-watchers. The Himalayan Mallard or the wild duck with an iridescent green or blue-headed plumage was spotted in Hyderabad waters in Hussainsagar lake. And Greylag Geese spotted in Rudrur lake in Nizamabad of Telangana. 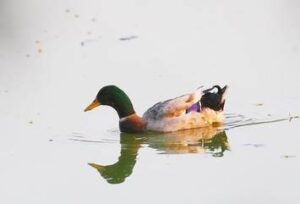 A group of morning joggers, who were on a recreational walk at Sanjeeviah Park on Tank Bund were in for a surprise when they spotted a Mallard in the waters of Hussainsagar lake.

Scientifically known as Anas Platyrhynchos, and commonly called the wild duck, the Mallard belongs to the duck family but has a most distinctive feature in the iridescent green or blue-headed plumage of the male.

The Mallard is a dabbling duck that feeds on all aquatic plants and vegetation near the surface of the water as well as insects and snails. Mallards are domesticated and are commonly-reared pets in areas where they are easily found and are reared for food.

Hyderabad-based raptor expert Pranay S Juvvadi says that the bird, they rushed to see, and found it swimming with the local spot-billed birds.

Discussing the possibilities of how the bird landed in Hyderabad, Pranay says, “Occasionally they stray in with other flocks and travel without their own group. This bird too must have landed in the city similarly. We usually go on walks to Sanjeevaiah Park to record bird sightings.”

He adds that Sanjeeviah Park’s unique combination of vegetation and waterfront makes it a suitable spot for migratory birds. Last year, another bird ‘Common Shelduck’ too was spotted at the Park. 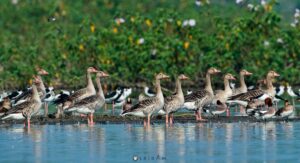 On the other hand, a flock of Greylag Geese, a winter migrant bird species, have migrated from Europe to Telangana. Wildlife photographers have sighted the Greylag Geese at Rudrur tank at Nizamabad district in Telangana.

Seasoned birders Sriram Reddy, Gopalakrishna R along with their team went for a birding trip to Rudrur lake.

Speaking to #KhabarLive, Gopalakrishna said that they were indeed very lucky to see so many Greylag geese at one place.

Though the bird was sighted earlier in various parts of South India, the Wildlife Photographer said that these birds were never sighted in such large numbers. Normally, he said that a few birds used to travel along with Barheaded geese, another migrant bird species from Europe. Sriram Reddy said that the record of over 50 Greylag geese is indeed a good record for the entire South India since they were normally sighted in north India.

ALSO READ:  'Gutsy Sailors' Take On The Gusts In 'Hussainsagar Lake' In Hyderabad

Saying that a good number of birds sets on winter migration from Europe and other parts of the world, when the temperatures go down below zero, Reddy said that they will nest and raise their chicks before flying back to their native places by March. He said that they will travel thousands of kilometers literally to reach India. 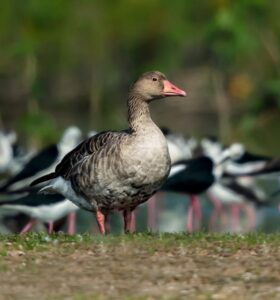