Bulli Bai is the new year gift to Indian Muslim women. Many Muslim women woke up to January 1 2022 to find their photos uploaded on a social media app called Bulli Bai on an online hosting platform called GitHub. This is the second attempt by unidentified people to auction Muslim women on social media. 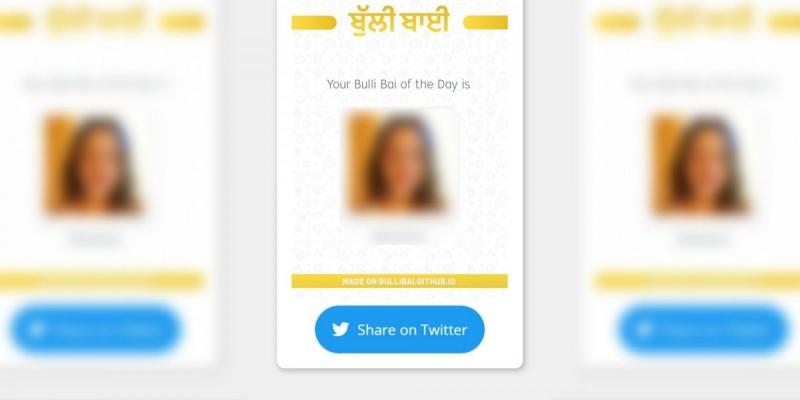 There are many Muslim names in the obnoxious #BulliBai , same as #SulliDeals Even Najeeb’s mother has not been spared. It’s a reflection on India’s broken justice system, a dilapidated law n order arrangement. Are we becoming the most unsafe country for women?

Half a year ago an app called Sulli Deals appeared online when photographs of 80 Muslim were put up for sale by misogynists in a contemptuous attempt to insult and to shame Muslim women on the social media.

Bulli Bai is a GitHub app where photos of hundreds of Muslim women have been uploaded without their permission by an unidentified group.

This because little police action was taken against communal targeting on the Sulli Deals app that misused photographs of Muslim women in a similar fashiob. FIRs were filed against those responsible for uploading the Sulli Deals app in Delhi and in Uttar Pradesh and countless complaints were lodged at several police stations across the country.

The disturbing and deliberate display of the selective abuse and targeting of course has no place in the glorious legacy that Muslim women enjoy in the region. The list is long.

But to narrow it down take the female writers in Urdu who are authors of great journalism and literature, and have been so for over a century.

Muhammadi Begum was editor of ‘Tahzib-un-Niswan’, Urdu’s first weekly launched in Lahore way back in 1898 by her husband, Mumtaz Ali.

Muhammadi Begum also wrote short stories and some novels. She was still very young when she suddenly died in 1908 but the weekly continued to be published till the 1950s.

‘Tahzib’ had encouraged Muslim men to challenge their own views on women’s rights and invited both women and men to express their views on similar issues. The result was that even men admitted in print that all human beings are equal souls before God, that it was unIslamic to keep women in ignorance as it was harmful for future generations and for a just society.

Week after week, the newspaper provided useful information in simple Urdu to women at home who observed ‘purdah’ and were not allowed to attend school. At this time educated men had increasingly wanted educated women as wives. That is why Muhammadi Begum’s articles on education, household management, advice to daughters-in-law on how to get along with their mothers-in-law and why girls should learn English, became popular.

There were political features on self rule and comments on international events such as the First World War. Nazar Sajjad Hyder, mother of one of Urdu literature’s most mesmerising writers, Qurratulain Hyder, also wrote in ‘Tahzib’ in 1921 to ask readers not to donate money to support India’s freedom struggle against the British but to give up using foreign cloth in exchange for khaddar.

Then there was ‘Khatun’, a monthly women’s magazine that was published from Aligarh between 1904 and 1914, followed by ‘Ismat’, published from Delhi in 1908. The main purpose of ‘Khatun’ was to advocate education for girls. Shaikh Abdullah and Waheed Jahan Begam, founders of the magazine had started the Aligarh Girls’ School in 1906. The Abdullahs were parents of five daughters, including Rashid Jahan, one of the founders of the Progressive Writers’ Movement who ushered in a new era in Urdu writing by women.

The third Urdu women’s magazine of the day was ‘Ismat’, that was founded by Rashidul Khairi, a male Urdu novelist. The first issue of ‘Ismat’ contained short stories, poems, articles on education, on housekeeping, a description of the Taj Mahal, and letters of welcome, including one from Waheed Jahan Begum Abdullah and a poem by Muhammadi Begum Mumtaz Ali. The support that these women received from the men around them later inspired other men to take an equally serious look at women’s issues.

Noted writer Mulk Raj Anand has called ‘London Ki Ek Raat’ by Marxist thinker and revolutionary Sajjad Zaheer, the best work of Urdu fiction when it was written in 1938. Zaheer, one of the founders of the Progressive Writers’ Movement in Lucknow, writes about a dozen characters who meet for an evening in a London home. This is perhaps the first book of its kind to lay bare the thoughts and feelings of young Indians in London, including women, in the mid-1930s.

Karima Begum is the female counterpart of Arif, described as a character who knows the price of everything but the value of nothing. Karima pretends to be genteel. She is the sort of person whose arrival casts a gloom over the party and who makes nasty remarks in a seemingly innocent way. She gets enraged if she is not the centre of attention and follows norms out of convention rather than conviction. Her criticism of what she calls “European ways” is based more on her veiled envy of English girls.

ALSO READ:  Overcome Rancor After The End Of Legal Feuds?

For the revolutionary Hindi novelist, Yashpal, the unequal status of women was an obvious concern. Born in 1903 and brought up by his mother who earned Rs 30 per month as a teacher, the author of ‘Divya’ – published in 1945 and hailed as the first feminist novel of Hindi literature – chooses to take the struggle of his protagonist to first century BC India as if to say that time has made no difference to the fortunes of women:

‘After a few moment’s silence, she continued, “Learned sir, what is left of the woman who has given up her self? The Acharya must forgive this humble servant. Even though destitute, she wishes to live independently. By losing her self she cannot remain alive.”‘

Born in 1936 in Lucknow, Naiyer Masud, one of the foremost short story writers in Urdu, continues to write in a very special way about women. Masud’s dream like story called ‘Nusrat’ is based on a person he knew as a child:

‘I do not remember the story of the bad woman now. But in those days I took a keen interest in it. I remember I was overjoyed learning that her case would be heard at our place, and that she would herself come over to see it settled. Prior to this, the case of another notoriously bad woman had also been heard at our house and my elders had brought it to a near conclusion. But that happened when I was still in my non-age. I had only heard others speak of her and they kept discussing her case amongst themselves until the case of this second bad woman came along and absorbed their attention…In fact, what aroused my interest in the matter was the opportunity it offered of looking squarely at a bad woman.’

There is literature aimed at women and then there is literature written by women. In the context of Urdu writings both are significant. Whereas women’s magazines were the channel through which Muslim women could present their point of view in the midst of the voices of the various male writers, it was the Progressive Writers’ Movement that was the real turning point that brought with it audacious writings on subjects ranging from rights to sex and politics. #KhabarLive #hydnews