A 22-year-old Rukmini has been waiting patiently for the past 30 minutes outside the Desi Jerrah clinic to see the so-called ‘doctor’ claimed as Master in bone-setting art. There is visible discomfort on her face and she can barely move her right leg. As the attender signals that she can go inside, Rukmini’s husband helps her into the therapy room.

Inside the room, Doctor sahab Mohammad Hameeduddin examines her sprained knee and asks Rukmini how she fell from the stairs. Before Rukmini can even finish her version of the incident, without warning the doctor gently pushes and twists her knee. Rukmini writhes in agony. The doctor then applies a yellow gel on her swollen knee, stretches it up and down, and minutes later Rukmini heaves a sigh of relief. 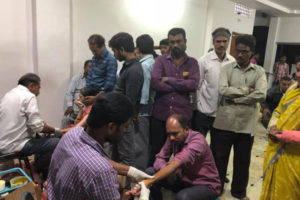 Rukmini is only one of the many patients who have been regular visitors at the bone-setting clinics in Hyderabad’s Old City area. Patients come from all parts of the city and wait in long queues outside the clinics. Not simply to avoid the hefty bills of orthopaedic surgeons, but because of the trust the desi bonesetters have gained over generations.

Mohammad Hameeduddin, armed with a semi-medical degree, continues the legacy of his father Mohammad Najanmuddin, who has been practising bone-setting from the past 50 years. Najanmuddin is 72 years old and has been a Unani practitioner.

The father-son duo neither advertises nor has put up boards outside the clinic, but people throng the place because they know that people’s sprains and fractures are cured in a jiffy. A price chart outside the clinic promises an entire course of treatment for less than Rs 500 for any patient.

“Without an X-ray, just by touching, we can deduce whether it’s a fracture, a sprain or a break. If we think the case is serious, we recommend an X-ray. If it’s a sprain, we usually fix it in a single sitting, while fractures may take multiple sittings. If the fracture is deep, like in the femur bone which is located deep inside the thigh, we do not take a risk and refer the case to an orthopaedic surgeon,” Hameeduddin says.

Just as Hameeduddin washes his hands after treating Rukmini, another patient enters. This time it’s a gym instructor who broke his thumb and has been visiting the clinic for the past one month. He sits in front of the doctor on the floor on a mat, the traditional way of examining a patient. Hameeduddin feels his thumb and says that 90% of the injury has been fixed and this could probably be the last sitting.

“We get so many cases that doctors from orthopaedic clinics refer to us. We first examine their health records, X-rays and case history. Patients visit us, first obviously to avoid the huge amounts that hospitals charge, but most importantly to get cured without having to undergo any surgery,” says Dr Hameeduddin as he begins unwrapping the patient’s bandage. 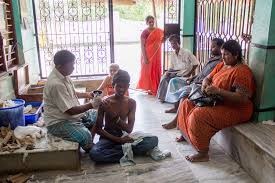 Just 4-5 km from the Healing Touch clinic is the Luqman Clinic in Shahalibanda where Hakeem Ghulam Mohiuddin, another Unani practitioner, has been treating patients for the past 30 years. Mohiuddin’s family has been traditional bonesetters or ‘Jerrahs’ for the past nine generations, ancestors who migrated to Hyderabad to get away from the clout of the royal Mughal physicians in Delhi who worked for Emperor Aurangzeb. The jerrahs, under the Nizam rule in Hyderabad, enjoyed freedom and security, and came up with innovations in treatment, recounts Mohiuddin.

Mohiuddin recollects his father Hakeem Ghulam Rasool with pride and a BBC documentary that was made on him by Dr Michael Yorke. Mohiuddin’s clinic, which now even has an outpatient ward, is lined with before-and-after photographs of patients who were treated by his father. Patients with twisted, fractured, dislocated bones – Hakeem Rasool treated them all.

ALSO READ:  ‍‍Major Fillip For ‍Electricity Consumption At IT Corridor Area In  Hyderabad

“During my father’s time, even practitioners who were not qualified in Western medicine received legal sanction to practice medicine. But many people didn’t bother or didn’t know how to receive the sanction because they were already into the practice and developed the bone-setting technique over years. Our method of treating has become so popular that we even have patients coming from foreign countries to fix their limbs,” Mohiuddin says.

Inside Mohiuddin’s room, in glass cabinets you see yellow and white coloured balms and other medicines, all of which Mohiuddin’s says were prepared at home. There are bottles of castor oil, bandages treated with albumin to make them stiff, and a few bamboo splints to complete the tool kit.

“The yellow gel is used for pain while the white one is used for massage. Most of it is made from beeswax and oil. The formulations are more than a century old and have been passed on from generation to generation,” Mohiuddin explains.

Like Hameeduddin, Mohiuddin’s too opines that the treatment has many takers because of the burden allopathic treatment puts on people’s pockets. “A fracture, even after cured, will require additional sittings. Many of the patients do not consider this viable in the first place. Also, the English way of treating requires that the leg or hand be put in a cast for months together which reduces the mobility of the person,” Mohiuddin adds. 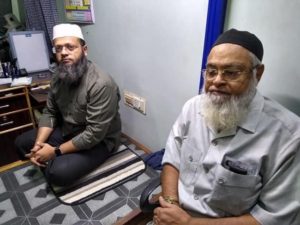 While people like Mohiuddin’s and Hameeduddin are registered practitioners, there are many who assume the job as an easy way to make money. “We have people who see what we do and then set up their own clinic and ruin even simple cases of muscle sprain. They have no experience and bring disgrace to our profession,” Mohiuddin rues.

Though the method is widely popular as a quick fix among the residents of Old City, allopathic doctors largely criticise it owing to the unscientific methods employed in the treatment. Speaking to #KhabarLive, Dr Deepak, an orthopaedic surgeon at Bowring Hospital, says that around 20% of the cases that come to his hospital are those of bone-setting treatment gone wrong.

“From the items they use for treatment, like albumin and bamboo, to the way they fiddle around with bones, bone-setting is a totally unscientific way of treating cases of bone dislocations. In hospitals, orthopaedic cases are dealt with such care that even normal (MBBS) doctors are not allowed to attend them.

Almost 50-60% of the patients who visit bone-setting clinics come back to hospitals after developing further complications. About 40% of the cases that get cured are a result of the natural healing tendency of our bones. 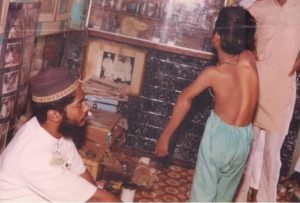 Orthopaedic science has developed in leaps and bounds that we are capable of getting people back to work in a week. Bone-setting is a blind game where the patients just try to save a few bucks and do not realise the damage they cause to their own body,” the doctor says.

But Mohiuddin refutes all of this. “Western medicine has evolved from these so-called unscientific methods of treatment. While it is possible to treat a patient with a sprain in a minute, we spend around 15-20 minutes with them explaining what to eat, the diet regime that has to be followed. We feel and understand the bones because we understand the human body, which is absent in the English way of treating a disease. If our treatment causes damage, what explains the crowd waiting outside to get a quick fix,” Mohiuddin asks, as he points at the next patient standing at his door with a plastered limb. #KhabarLive #hydnews