The most Intelligent game-changer in Indian politics is known as Asaduddin Owaisi. He has emerged as a rather controversial figure amongst Muslims. A politician who has inherited the All India Muslim Majlis-e-Ittehadul Muslimeen, Asaduddin Owaisi has a committed fan following and yet invites huge scepticism and criticism from within the community and outside.

The AIMIM is a Hyderabad party founded in the 19th Century, has not been very active outside the Deccan until recent years, but has spread its wings in Maharashtra, Bihar, Gujarat, Karnataka, Tamil Nadu and of course Uttar Pradesh. Owaisi is a stand alone figure, campaigning across the states when there are elections, and spending more of his time in Hyderabad that is his party’s bastion when there are no polls. He speaks perfect English and Urdu, levels the most astounding allegations against the BJP and others, and yet invites no action with even the trolls barely paying attention to him.

It is the last that has raised eyebrows across as young persons have been arrested for a cartoon or a joke, whereas Owaisi manages to get away with his rather provocative speeches with the BJP keeping him out of their target zone. This has led the skeptics to allege that Owaisi is a mole of the ruling party, and is fielded to cut into the opposition votes in crucial elections. Owaisi of course, hotly denies these charges but sometimes figures start to speak for themselves.

His foray into Uttar Pradesh has been the most expansive as yet. Owaisi does not seem to care about winning and losing but chooses his constituencies with care. In the wake of reports that the Muslims were looking at a consolidation behind the Samajwadi Party, Owaisi entered the UP Assembly election with a record 95 candidates. In the last Assembly polls in 2017 he had fielded 38 candidates and secured just 0.24% of the votes. This time he has just 0.49% of the votes, with all his candidates losing their deposits. 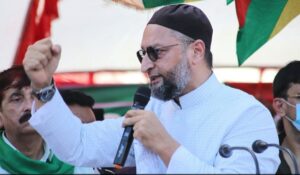 But a closer look at some of the constituencies in these closely contested elections reveals an alarming truth. Look at these seats won by the BJP with the AIMIM making all the difference for the Samajwadi Party:

In UP too in many of the constituencies the Muslims spoke of supporting him, albeit in small percentages as the final results have revealed. In key constituencies the AIMMM cut sufficient votes to bring the BJP to power with narrow margins of a few hundred votes. 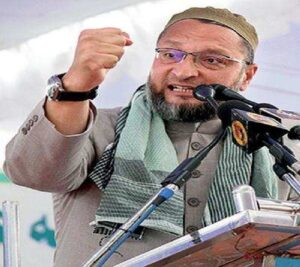 In Firozabad the AIMIM candidate managed 18898 votes, cutting into the sizeable Muslim votes here and in the process ensuring a full defeat for SP. It must be recalled that this election around the Muslims decided to vote en bloc for the Samajwadi party, and while most stayed the course Owaisi because of his minority politics was able to take the votes of the more conservative sections who actually perceive him as a crusader for minority rights.

Is this then the purpose for Owaisi’s existence in the electoral field? He and his supporters continue to deny this, but this does not silence those pointing fingers that were raised also in Bihar where he contested 20 seats, as against six in 2015 and secured just 1.24% of the votes cast; or in Maharashtra where he fielded 44 candidates in the 2019 polls (as against 24 earlier) and secured just 1.34 % of the votes; and in Uttarakhand this time around with his four candidates getting just 0.03% of the votes. Owaisi fields candidates from seats where the Muslims have a significant presence, although he insists he is secular. 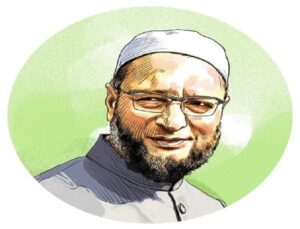 In Hyderabad he is a controversial figure amongst the elite, but has control over the voters who support the AIMIM blindly. For decades the party was confined to this erstwhile princely state, but in recent years under Asaduddin Owaisi the party has moved into the other states such as the above. It has been contesting local civic polls, as well as Assembly and Lok Sabha elections. It contested just the one Hyderabad Lok Sabha seat from 1989 till 2009 with new ambitions visible in 2014 when it fielded five candidates and in 2019 where it fielded 3 candidates and won two seats including that of Asaduddin Owaisi. The second, significantly, is Imtiaz Jaleel from Aurangabad, Maharashtra where the AIMIM has also expanded its foothold.

ALSO READ:  On 'National Boss Day', Who Is Your 'Real Boss'? In his defense Owaisi claims that he cannot be held responsible for any split in the Muslim vote and this will not stop him from expanding his party. He says his party is concerned about the minorities and is in a position to speak for their rights and safety and security. Muslim leaders in UP differ, maintaining that he is not an independent politician and is in place not to win an election but to divide the ‘secular’ votes.

But perhaps the last word can go to BJP MP from Kaiserganj Brij Bhushan Sharan Singh who while campaigning for his son and BJP candidate from Gonda recently, described Owaisi as Lord Ram’s descendant and claimed that he was a Kshatriya earlier. #KhabarLive #hydnews