Cadbury to Kitkat, most every confectionary company and home baker goes for heart-shaped treats on Valentine’s Day.

Every year, 14 February is celebrated as the day of love, affection and friendship. And this day is also synonymous with gifts, flowers and most importantly chocolates!

This evergreen association of Valentine’s Day with chocolates can be traced back to the 1800s. In 1861, British scion of chocolate Richard Cadbury began selling chocolate in heart-shaped boxes with images of Cupid, the Roman God of love, on them.

His idea of chocolates in heart-shaped boxes became widely popular because he also made chocolate more economical. Prior to this, chocolate was considered a luxury and something only purchased by the elite class.

Following this, Cadbury’s chocolates got more commercialised and were widely sold. Even when the chocolates were over, people used the boxes to keep mementos in them such as love letters.

Then, in 1894, Milton Hershey who started his career as a caramel maker, began covering caramel with sweet chocolates.

In 1907, Hershey, the company, launched a chocolate called ‘Kisses’. Though shaped like a heart, it was called so because the chocolate apparently made a smooching noise during the manufacturing process. Kisses were sold at an affordable price and were advertised as “nourishing food”. 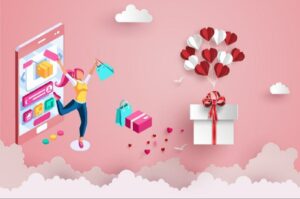 Following Hershey, Clara Stover and her husband Russel Stover sold Valentine’s chocolates in heart-shaped boxes to department stores across the midwest-US. Among their most popular chocolates were the ‘Secret Lace Heart’, which was covered in satin and black lace.

Today, Russel Stover, whose parent organisation is Lindt & Sprüngl, is among the top boxed-chocolate companies in the US.

In 2019, according to the National Confectioners Association in the US, Americans spent more than $3 billion only on chocolates on Valentine’s Day. 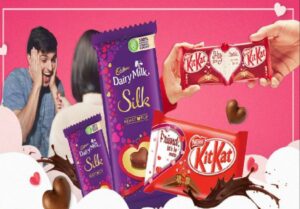 Chocolates and Valentine’s in India
The trend soon spread world-over and it was impossible to imagine Valentine’s Day without chocolates. India is no exception.

Delhi-based Aadvik Foods saw a hike of more than 40 per cent in the sale of chocolates during Valentine’s week in 2019.

According to Amaaya Sharma, a 19-year-old home baker, the follow-up to Valentine’s Day is the busiest time for her bakery venture, Amaaya Bakes.

“The run up to Valentine’s Day has always been incredibly busy, and over the years I’ve added more chocolate items to the menu as those are most popular during this period. I would say it is almost a two-fold jump. Clearly, chocolate is an aphrodisiac after all,” said Sharma.

Maneck Malhotra, director and one of the shareholders of Buttercup Confectionery Ltd., which has been around for more than 30 years and is based in New Delhi and Bengaluru, said Valentine’s Day is among the largest festivals for them.

While the company has the usual heart-shaped chocolate the entire year around, this year they have tied up with Ferns and Petals for special ‘I love you chocolate’ boxes for 14 February.

Malhotra explained that for Valentine’s Day, the content has remained the same in terms of chocolates, however they keep experimenting with new flavours and innovating messaging. “Our main focus is on changing the packaging of our chocolates each year for Valentine’s Day.” 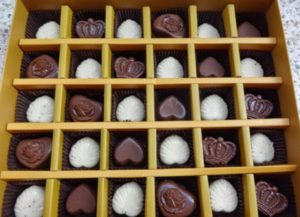 Pop-your heart out chocolate commercials
Aside from increased sales, chocolate brands have special ad campaigns for the big V-Day.

Cadbury took this a step ahead with a special edition to its ‘Silk’ range — a heart-shaped chocolate.

The advertisement for the same, which was launched in 2018, became very popular. It features two young people sitting in a cafe. The boy appears nervous about gifting his date a Cadbury Silk with the heart-shaped pop out chocolate.

The voice-over in the commercial said: “Don’t wait to pop your heart out with the new Silk Valentine’s Day pack.”

According to Sumira Dhawan, an event planner based in Delhi, the catchy tune of the ad made it synonymous with Valentine’s Day.

“I distinctly remember the Cadbury ad’s catchphrase and the tune. Whenever I saw it, I knew Valentine’s Day was around the corner,” she told #KhabarLive.

Even Nestle’s KitKat has a special Valentine’s Day commercial, where it capitalises on both the romantic and a-romantic spirit. The ad shows everyone distributing a KitKat to each other on Valentine’s Day with the catchphrase: “KitKat hai dil nahi, sab ko dena banta hai (It’s KitKat, not my heart, should be given to everyone). #KhabarLive #hydnews