Salted Ragi Ambli is a nutritious healthy breakfast drink made with Finger millet flour , water and buttermilk ,further taste is enhanced by tempering.

Ragi malt is a light and easily digestible beverage which is majorly consumed during the summers. 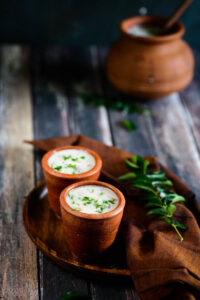 Ragi ambli is a kannada word which means finger millet porridge. This is a nutritious and healthy drink made using Ragi which can be consumed for breakfast. Ragi ganji is a nutritious drink light on stomach and easy to digest.

There are 2 variants of Ragi Ambli or ragi ganji , sweet and salt version. For salted version buttermilk is used where as for sweet version , milk and jaggery are used to make ragi ambli . As it keeps the body cool , it is one of the simplest and easiest breakfast that can be consumed during summer season. With the onset of summer , here comes nutritious and healthy recipe for the season. Also when it comes to weight loss , adding this super grain in your diet can be very beneficial .

Finger millets / Nachni / Ragi is one of the most nutritious cereal. Ragi is very rich in calcium, in fact, no other cereal is even near to ragi with respect to calcium content. Regular consumption of finger millet is good for bone health and keeps diseases such as osteoporosis at bay and could reduce risk of fracture. It is also rich in fiber and has lower glycemic response , hence helps in controlling blood sugar levels. It also battles anaemia, reduces the risk of stroke, boosts lactation, increases bone strength, helps in digestion, reduces cholesterol and makes excellent food for baby . Ragi is also gluten free and hence good for people who are allergic to gluten.

This super grain has umpteen benefits when comes to health , so if you are new to this cereal , start adding to your diet. Also if you are suffering from sleep disorders and mood swings , this super grain helps you to overcome this. Ragi contains essential amino acid known as Tryptophan , which goes into making serotonin .

What is Serotonin ? This a chemical in the brain that can affect mood and sleep. Eating foods that contain the essential amino acid tryptophan can help the body to produce more serotonin. Tryptophan, which goes into making serotonin, is commonly found in foods that contains protein and humble ragi falls into this category. Hence its called a super food as this tiny grains is no less than a wonder grain.

Ragi Ambali / Malt, also known as Thaidalu in Telangana, is a healthy, delicious, and nutritious recipe, which is usually preferred as a beverage. It is also consumed as as breakfast or snack in South India. Ragi Ambali is also referred to as ganji, kanji, java, malt, and porridge as well. This drink is light and easily digestible with many health benefits.

ALSO READ:  'Mango A Day, Keeps The Heat Away' 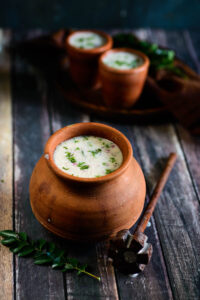 It is also considered as a wonder grain for weight loss, rich in fibre, calcium, and many nutrients to go with. It keeps our body cool during scorching summers and is a best aid for people suffering from diabetes. It is also a great baby food as it is easily digestible and helps in strengthening the baby bones. Other than malt, ragi can be made in different recipes like roti, dosa, or idli.

Method of Preparation:
– Take 2 tbsp of ragi powder to a mixing bowl, add 1/2 a cup of water.

– Mix well without lumps, let it rest for a minimum of 2 hours with a sieve or strainer-like plate.

– Can be soaked overnight as well, strain off the water from the soaked ragi as the flour/powder settles down.

– To the strained water add some more ragi flour mix well with no lumps for next day’s malt.

– The reason for soaking or rather fermenting it is it produces probiotic bacteria i.e. good bacteria.

– They are good for our health to build the immune system.

– Add the soaked/fermented ragi flour paste to the boiling water.

– Keep stirring it continuously, or would get stick and burnt at the bottom. Cook until thick.

– Cook it on low flame, stirring it until thick or it would overflow. When cooked it looks creamy and soft.

– If it too thick some water can be added to it, add a pinch of salt, or as needed.

– Generally, rice, granulated rice, millets, oats can also be added. Mix well and put off the flame.
Let it cool down completely, add some buttermilk to it, and have it.

– Generally, in villages, people have it with some raw onions, green chillies, or mango pickle. It makes a great combination.

– It is a must in villages, they prefer to have it every morning in summers. It is better to take fermented Ragi malt.