The ongoing water disputes with both Telugu States are becoming a herculean task to get solutions or Resolving process. The way the both states adopted the words war, it will not a healthy sign. Let’s have a look on the recent developments on this row and try to find out the solutions too.

A fresh attack on RLIS gains significance in view of the political atmosphere getting charged in the run up of Huzurabad bypolls. The TRS has intensified its attack against neighbouring Andhra Pradesh over the proposed Rayalaseema Lift Irrigation Scheme (RLIS).

In response Andhra Pradesh too clarified it’s status and offer to resolve the issue amicably with bilateral talks. 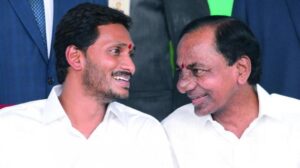 However, sources from AP indicate Jagan is ready for talks with Chandrashekar Rao to resolve the Krishna dispute in an amicable manner but KCR is not interested to hold any talks or meetings with Andhra Pradesh counterpart.

On the other hand, sources in the ruling Telangana Rashtra Samithi (TRS) said that Chandrashekar Rao wants to hold talks only if AP government withdraws controversial projects over the Krishna and RDS and is willing to share surplus Godavari water with AP by constructing either joint projects or individual projects on Godavari for benefit of both the Telugu states.

Meanwhile, Union Jal Shakti minister Gajendra Singh Shekhawat is learnt to have called Chandrashekar Rao over the phone on Friday and discussed the Rayalseema Lift Irrigation Scheme (RLIS) works. He reportedly assured the CM that his ministry would soon send a team from the Krishna River Management Board (KRMB) to the RLIS site to assess the actual position of works. This is the present scenario of the Telugu States.

Interstate (River) Water Disputes (ISWDs) are a continuing challenge to the nation. These disputes have a long history and the rulers of the regions or those who governed the areas pre and post independence contributed their mite to the contentious issues by pursuing their narrow interests. The disputes are constitutional, historico-geographical, and because of institutional ambiguities too. Nowadays, politics is adding to the controversies with politicians playing up ‘people’s demands’ to suit their vote banks prolonging the conflicts further. The disputes between the two Telugu States fall into the pattern.

There is no reason why these could not be amicably resolved. AP’s efforts to alleviate Rayalaseema water woes have again started fanning the political flames in the two States. It is clear that apart from the constitutional complexities, contentious political federalism and identity-based electoral political dynamics are fueling the ISWDs.

We have 25 major river basins in the country, with most rivers flowing across states. As river basins are shared resources, a coordinated approach between the states, with adequate involvement of the Centre, is necessary for the preservation, equitable distribution and sustainable utilisation of river water. Researchers have always suggested that given India’s federal political structure, inter-state disputes require the involvement of the Union government for a federal solution at two levels: between the states involved, and between the Centre and the states.

However, interstate rivers in India have become sites of contestations, fuelled by conflicting perceptions of property rights, flawed economic instruments for food security, the lack of an integrated ecosystems approach, and the prevalence of reductionist hydrology for water resource development. Such conflicts over the possession and control of river water have persisted since the inception of the Indian Republic, with prolonged delays in resolution due to historical, institutional and political factors.

In recent years, increasing water scarcity, a rapid rise in urban and rural demands for freshwater, and contentious political dynamics have further exacerbated the problem. Where does Constitutional failure come in? The traditional justification for keeping interstate rivers under the Centre’s purview is that since these rivers are not confined by any boundaries (political or administrative), no State can claim an exclusive right to utilise their waters by depriving another State located downstream.

ALSO READ:  Everything Is Temporary In The New Capital Of AP - Amaravati!

Interestingly, however, while the Union List mentions “interstate water,” the State List simply uses the term “water” to signify what is essentially “surface water” confined within the boundaries of the State. This has allowed States to legislate on the entire extent of surface water available within its borders, regardless of whether the source of the river or its tributary is located outside its boundary or the river is draining into another State.

In this regard, a State only exercises its right to use water for various purposes as long as the Union government deems fit. The moment the Centre steps in the dispute only gets prolonged. Why don’t the governments understand this simple matter? There is an urgent need to manage the multiple political challenges with institutional trust for facilitating a public discourse focused on dispute resolution and consensus-building. Will the governments do it at least now? #KhabarLive #hydnews